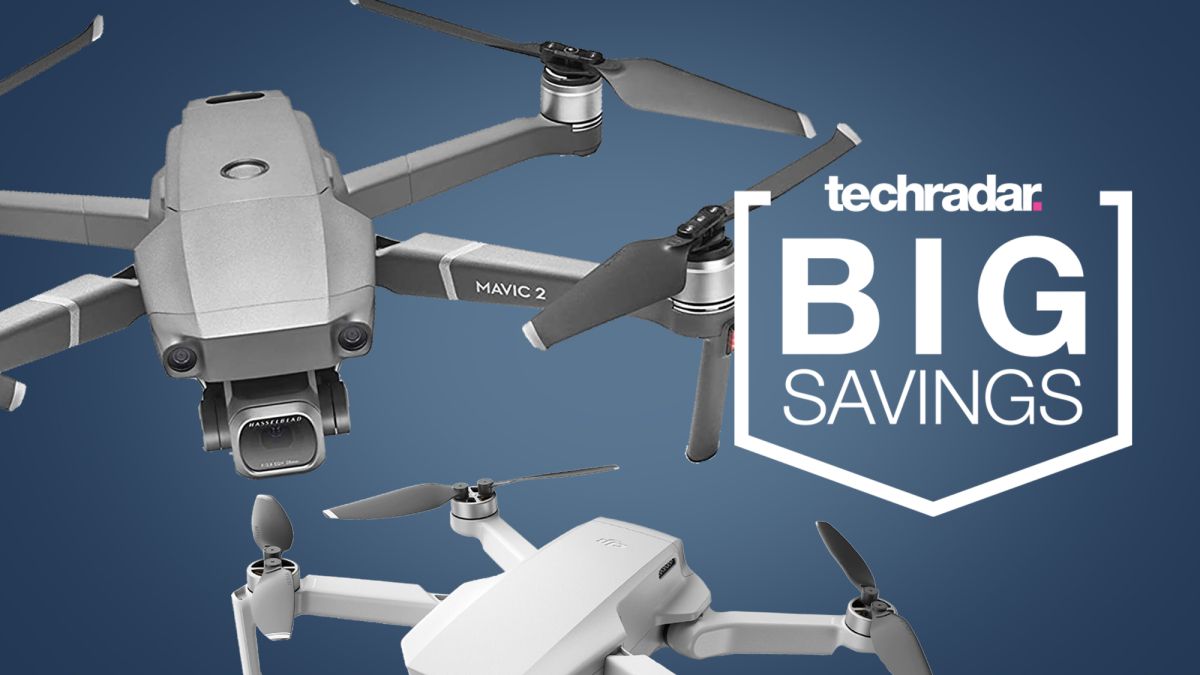 The Cyber Monday drone deals may now be over, but some discounts are still flying – and we’ve rounded them all up here.

DJI’s Cyber Monday official sale is now over, so most of the price cuts on models like the Mavic Mini have now expired.

But a few discounts on older models like the DJI Mavic Air and DJI Mavic 2 Zoom are still available at retailers like Amazon, while rivals like Autel have continued their holiday deals.

Looking for deals on the new DJI Mini 2? They were almost non-existent, even during the Black Friday weekend, but we’ve rounded up the best places to pick one up (along with a bargain memory card) in our where to buy the DJI Mini 2 on Cyber Monday guide.

DJI Mavic Air Fly More Combo $729 at Amazon
You can still save 37% on this Fly More Combo for the DJI Mavic Air. It may have now been succeeded by the Mavic Air 2, but this remains a very capable 4K drone – it has a 100Mbps bit-rate, HDR stills and near-perfect obstacle avoidance. This bundle includes three batteries and shoulder bag among many other accessories.View Deal

DJI Mavic 2 Zoom $1,349 at Amazon
The Mavic 2 Zoom remains one of favorite drones for one main reaon – its 24-48mm optical zoom, which lets you shoot videos of more distant subjects while maintaining a safe distance. Like the Mavic 2 Pro, it also has a lightweight, foldable design and QuickShot intelligent flight modes. This deal saves you $90 on its usual price.View Deal

Autel Evo II Plus On The Go Bundle $1,595 at Autel
Autel has quickly built a reputation as a genuine rival to DJI and the Evo II is certainly an aerial powerhouse, with a 48MP sensor, 120Mbps bit-rate and a 40-minute battery life. This special Black Friday offer includes two batteries, a shoulder bag and five pairs of props, on top the standard controller and drone itself, and save you $218 on the bundle’s usual price.View Deal

The perfect learner drone for anyone who wants to learn the basics of flying a quadcopter, the Ryze Tello also packs a camera that can shoot 720p video and 5MP stills. Down to just $89 with this 10% off deal, it packs some nifty flying tricks and automated take-off and landing, too.View Deal

While the standard and Fly More Combo DJI Mini 2 bundles are available at B&H, the retailer is also offering this unique hardshell case kit with a $19.99 discount for Cyber Monday. This is particularly handy if you’re planning to travel a lot with the Mini 2. Offer ends 11.59pm on November 30.View Deal

Our number one drone doesn’t have too many discounts yet, but this bundle is one of the best. You get a free SanDisk 128GB Extreme UHS-1 microSDXC card, landing pad and an optics cleaning kit, along with our favorite drone around for beginners and hobbyists. The Mavic Air 2 shoots 4K/60p video and a much-improved battery life.View Deal

If you tend to fly a lot in windy conditions and need pro-level image quality, the Phantom 4 Pro V2.0 is a great option. DJI’s Phantom series has been overshadowed by its smaller Mavic cousins in recent years, but this drone’s power, speed and highly responsive controls make it a fine alternative for pro photographers and videographers.View Deal

Okay, it doesn’t have a camera, but this impressive replica of the USS Enterprise is a different kind of drone. It has ten authentic sound effects and the controller even has a warp speed switch for an extra burst of speed mid-flight (hopefully not straight into your flatmate’s face).View Deal

DJI Mavic Mini Combo £409 at Amazon
If you can afford it, we usually recommend getting the Fly More Combo bundles for DJI drones – and this Mavic Mini one is, like the standard bundle, also discounted by a decent 11% right now. It comes with three batteries, a carry bag, a two-way charging hub and 360-degree prop guards, among other accessories.View Deal

DJI Mavic 2 Pro £1,179 at Maplin
This is the lowest price currently available anywhere in the UK for the Mavic 2 Pro, which remains our top pick for those who need a travel-friendly drone with pro-level image quality. It has a large, one-inch sensor and a handy adjustable aperture, plus all of DJI’s usual automated flying modes. View Deal

Looking for a learner drone to teach you all the flying basics while capturing 720p video? The Ryze Tello is the best around and it’s now down to only £89 in this 10% off deal. Its app comes with automatic take-off and landing controls, along with some nifty tricks like ‘throw and go’.View Deal

This tiny drone is a superb choice for beginners and has just hit its lowest ever price. The Mavic Mini has just been succeeded by the DJI Mini 2, but we reckon it’s better value if you don’t need the latter’s 4K video shooting. Its 12MP, gimbal-stabilized camera shoots excellent video, and you get DJI’s superb QuickShot modes for automated flying maneuvers.View Deal

This DJI drone has one killer feature – its 24-48mm optical zoom, which lets you shoot video of people while maintaining a safe distance. The Mavic 2 Zoom isn’t a one-trick pony either, with its lightweight, foldable design and intelligent flight modes making it one of favourite fliers. This excellent deal saves you £150.View Deal

Not in the US or UK? You’ll find all the lowest prices on drones from around the web right here, with offers available in your region.