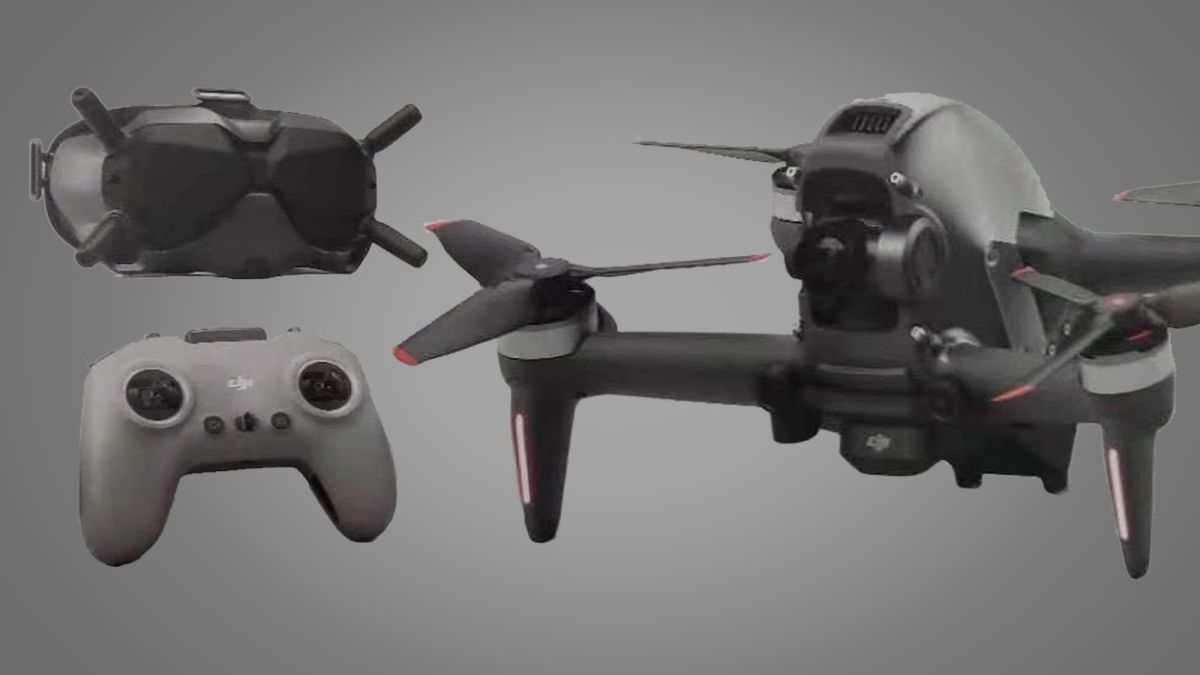 Is DJI really to release another new drone so soon after the DJI Mini 2? Surprisingly, the rumors suggest it might be planning to do just that, with a new DJI FPV drone seemingly cleared for an imminent take-off after a string of leaks.

Rumors about a DJI FPV (First Person View) drone started back in late 2019, when DJI released its Digital FPV System for adding a high-quality FPV system to existing racing drones. While DJI drones have traditionally focused on aerial filmmaking, it wouldn’t be a huge stretch to see it build a fast, agile drone that works with its low-latency transmission kit.

So what kind of specs could the DJI FPV drone have and what is it expected to look like? The leaked images so far suggest a departure from recent drones like the DJI Mini 2, though it’s also expected to pack a powerful camera that could see it appeal to filmmakers as much as drone racing fans.

Here are all the DJI FPV rumors we’ve seen so far, plus our thoughts on how it’s shaping up…

So far, there hasn’t been a precise release date rumored for the DJI FPV drone or any sign of an event invite. The biggest hint has come from regular DJI leaker @OsitaLV on Twitter – on December 2, they posted a listed of possible specs for the drone, which finished with the line “will it come online in a month? Let’s see.”

That’s pretty vague, but the amount of leaked images, which appear to include an early prototype of the DJI FPV Combo bundle’s packaging, support the idea that a launch could well happen in that timeframe.

A December launch now seems unlikely, so perhaps the CES show (which takes place between January 11-14) could be a possible virtual location for the unveiling. A 2020 launch isn’t impossible – with DJI’s VP of Policy and Legal Affairs Brendan Schulman seemingly hinting in an October tweet there might be room this year for another launch – but an unveiling in early 2021 seems more likely.

How much will the DJI FPV drone cost? There haven’t been any rumors on pricing yet and, given this would be a brand new category for DJI, there’s no real existing guide for a ballpark price. It’s fair to say it probably won’t come cheap though – currently, the DJI FPV Experience Combo (which includes the DJI Goggles, Antennas, Air Unit (with camera) and cables needed) costs $819 / £809 / AU$1,299, and that’s without the drone. We’ll update this page as soon as we hear any rumors on pricing though.

What is an FPV drone?

Before we look at the DJI FPV’s possible specs, it’s probably helpful to answer a broader question – what exactly is an FPV drone?

As we explained earlier, FPV stands for First Person View – this is because in FPV racing the pilot wears digital goggles that give them the feeling that they’re soaring through the air like an eagle high on energy drinks.

You can see the effect in DJI’s video for its existing Digital FPV system below. The combination of the drone’s speed and agility, coupled with a high-quality camera and impressive piloting skills, create a unique, visceral experience – and that’s even without the headset to boost the immersion levels.

FPV drones are generally associated with drone racing, a sport that’s been growing for around a decade. It sees pilots attempt to fly their drone around a course as quickly as possible, with the First Person View aspect enabling them to see from the drone’s ‘cockpit’ and speed around like a real-life game of WipEout.

Naturally, the most important factor for drone racing pilots is latency, or a delay in data transfer, because at the speeds they’re flying, even a tiny lag can mean the drone itself actually being several feet away from the position they see in their headset. This is why most FPV systems have traditionally used analogue signals due to their low or zero-latency transmission.

Overlord, this is FPV 1, requesting take off.FPV 1 you are cleared to take off, please proceed to helipad one.Solid copy Overlord, FPV 1 taking off at helipad one.FPV 1, you have the sky, have nice trip, over and out.Copy that, FPV 1 out. pic.twitter.com/GTw6A2w4mRDecember 2, 2020

The downside of analogue is usually a low-quality video feed, which is why DJI attempted to provide the best of both worlds with the Digital FPV System. Its cameras can capture video at 1080p/60p, while its FPV Goggles show HD video at 120p. The transmission module also promises super-low latency.

But DJI’s system isn’t just built for drone racing. It has a built-in video recorder and, as you can see from the footage above, it captures some pretty stunning (albeit 1080p) video footage that filmmakers might well want to use for dynamic cut-scenes.

And the rumored specs for the DJI FPV drone suggest it might also have a similar focus, making it less of a leap from drones like the DJI Mini 2 than it might first appear…

That earlier Tweet from @OsitaLV on December 2 gave us a list of potential specs for the DJI FPV drone.

These include 4K/60p video recording, 5-inch propellers, a maximum speed of 150kph (or 93mph), and a “built-in camera with remote-adjustable tilt angle”. These specs, if accurate, lend credence to the theory that the DJI FPV drone will be designed as much for capturing video as racing.

In fact, the design suggests it could be a different breed from racing drones, which, like rally cars, tend to be more basic and stripped down in order to maximize speed and agility.

Looks like spaceship!Someone who got evaluation didn’t keep their NDA. pic.twitter.com/qyFycphly6December 2, 2020

The seemingly leaked image of the DJI FPV above, meanwhile, shows a slightly chunkier design that looks not unlike a small version of the DJI Inspire 2. This could potentially make it more able to absorb crashes from beginner pilots, and also pack in a larger battery that would give it a longer flight time than the average racing drone.

According to the leaks, the DJI FPV drone will also apparently have three flight modes, built-in GPS and a return-to-home function, which would again suggest it’s aimed at mainstream fliers rather than professional pilots.

The rumors and leaks so far certainly suggest that a DJI FPV drone could launch soon. But there are still a lot of question marks, including exactly what price it might land for and the experience level this agile little flier could be aimed at.

If it does indeed include a 4K/60p camera, that would suggest it could well be a new aerial tool for ‘cinewhoop’ style videos and filmmakers looking to create dynamic shots that you can’t quite pull off using drones like DJI’s existing Mavic series.

The latter do have an FPV mode in their app, which locks the roll axis and ensures the horizon turns with the drone as you move it from side-to-side. But they lack the 93mph speed and agility of what’s being rumored for the DJI FPV drone.

While it might not be able to compete with top-level racing drones, the DJI FPV drone may well also be billed as an approachable, all-in-one option for those looking to take their first steps into drone racing. But if that’s the case, it’ll need to come with a suitably entry-level price tag.

We’re certainly excited to find out exactly what DJI has in store and will update this page as soon as we hear any more rumors or official info.