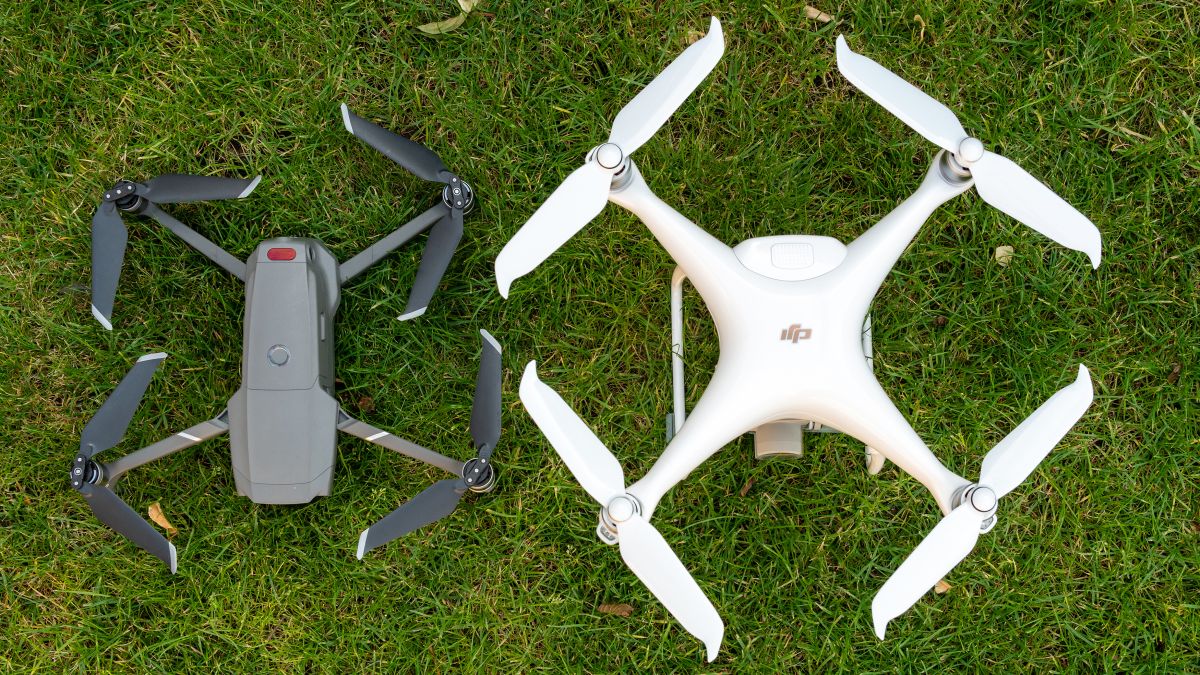 The DJI Mavic 2 Pro and DJI Phantom 4 Pro V2.0 may have both arrived in 2018, but they feel like they’re from very different eras. In fact, after the incredible success of the DJI Mavic series, it feels like its Phantom line has taken something of a backseat.

But that’s not necessarily the case. In fact, the re-release of the DJI Phantom 4 Pro V2.0 in January 2020, after the drone was pulled from sale, has shown that both DJI and its fans are still invested in the Phantom series. And with good reason.

The popularity of DJI’s Mavic line is understandable because the series’ lightweight and foldable design makes those drones hugely portable. Both the Phantom 4 Pro and Mavic 2 Pro feature a 20MP 1-inch sensor, extremely similar flight times, speeds and battery life, so the question is: why on earth would you buy a larger, heavier and more expensive drone like the Phantom 4 Pro V2.0?

Add the Mavic 2 Pro’s Fly More bundle, which includes two additional batteries, a carry case, a charging hub, spare propellors and a few other things, and the price is pretty comparable to the Phantom’s basic kit.

But it’s only once you start looking more closely at what both drones have to offer in the camera department that the continued relevance of the Phantom series quickly becomes plain to see.

In terms of design, the Mavic 2 Pro and Phantom 4 Pro V2.0 couldn’t be more different.

The Phantom follows what you might call DJI’s traditional drone design, which hasn’t changed a great deal from the first Phantom drone models.

From above, the Phantom is an X-shape with propellors at the end of each arm – these need to be attached for flight and taken off for transportation. The drone sits on two tall feet that double up as antennas, with the gimbal and camera hanging between them.

By comparison, the Mavic 2 Pro is just 214×91×84mm when folded and weighs 907g with a battery and propellers installed.

With the Mavic, the propellers can be left attached during transportation because they rotate, so one half sits over the other.

In keeping with these dramatic differences of the drones themselves, the controllers are also profoundly different, despite providing extremely similar controls.

The Phantom 4 Pro V2.0’s controller is large and white with a phone and tablet holder on the front that will accommodate smartphones or tablets up to 10-inches in landscape format.

By contrast, the Mavic 2 Pro’s controller is much smaller and lighter, with folding wings that hold a smartphone at the bottom of the controller. There are a few more direct access controls and a handy LCD screen that provides useful drone and flight information, which the Phantom controller lacks.

Moving beyond the design differences between the two drones, which will be one of major factors in your decision between them, it’s surprising to find that the features and functionality of the Phantom 4 Pro V2.0 and Mavic 2 Pro are pretty similar.

In many ways, you could say they’re almost the same drone but in different bodies. But it’s when we look at the cameras that important differences come to light.

Both drones feature a variety of flight modes for making the drone behave in different ways and intelligent flight modes that make it possible to achieve a number of advanced video effects at the touch of a button.

Without simply listing everything both drones have, it’s safe to say that the Mavic 2 Pro is much more fully-featured drone in this area and provides many more automated options for creating both stills and video.

While the majority of professional videographers and photographers will perform the same tasks manually to maintain full control, one standout feature that the Mavic 2 Pro possesses over the Phantom 4 Pro V2.0 is the ability to shoot aerial time-lapse/hyperlapse videos.

These dynamic videos, which can be recorded alongside individual stills, can produce incredible results from an aerial position, so it’s a shame that this isn’t possible with the Phantom, despite the two drones using the same DJI Go 4 app for smartphones and tablets.

In terms of flight speed, wind resistance and battery life, the Mavic 2 Pro and Phantom 4 Pro V2.0 are practically identical.

Any differences are so small that they’re negligible. Battery life is advertised as being 30 minutes for the Phantom and 31 minutes for the Mavic, although it’s rare to achieve these flight times because it’s always best to land a drone before the battery gets too low. Both drones can fly at up to 72kph/45mph in Sport mode.

Despite these near-identical specs, the Phantom 4 Pro V2.0 is much more responsive than the Mavic 2 Pro in terms of its controller.

That’s not to say that the Mavic 2 Pro isn’t responsive – it certainly is and flight is extremely smooth. But the Phantom is much more sensitive, so for smooth flight you must use the thumb and index finger ‘pinch’ method when using the control sticks, because this approach provides much more control and counteracts the sensitivity of the controls.

The Mavic 2 Pro is arguably slightly easier to fly than the Phantom 4 Pro V2.0, although the latter is still a great performer.

In terms of obstacle avoidance, the Mavic Pro 2 has a clear advantage with omnidirectional obstacle sensing in six directions. The Phantom offers obstacle sensing five directions with the side sensors being infrared rather than visual. This, of course, makes the Mavic better in this area, but in real-world situations the Phantom performs perfectly well. This certainly shouldn’t be a dealbreaker, or maker, one way or the other.

The quality of stills and video from both drones is extremely similar. In short, they’re both excellent performers thanks to the 20MP 1-inch sensors they both have on board.

The Mavic 2 Pro’s camera is a Hasselblad with a full-frame equivalent focal length of 28mm, while the Phantom is slightly wider at 24mm.

The Mavic 2 Pro produces what appear to be slightly sharper images than the Phantom 4 Pro V2.0, which means it’ll particularly appeal to stills photographers looking for a drone for aerial photography.

Both drones also offer an adjustable aperture of f/2.8-f/11, the option of shooting raw stills in DNG format, and the ability to capture 4K video in flat profiles for color grading.

This is essential when shooting aerial footage that needs to be color- and style-matched to standard footage in professional workflows. But both drones also capture video with profiles attached, so the footage is effectively ready for use straight out of camera, making them ideal for amateur use, too.

In terms of video, the Phantom has the edge and for videographers this could be the deciding factor. The larger size of the Phantom translates into a larger camera; one that features a mechanical shutter, which is much better for capturing scenes naturally than digital shutters.

The difference between the two is that a digital shutter scans the scene to create an image, while a mechanical shutter opens and closes to capture the scene in one go. The result is that mechanical shutters don’t suffer from rolling shutter – a problem where objects can appear to bend or where moving elements appear fragmented in video footage.

The color profiles are different but essentially offer the same result. Still, it’s the Phantom’s faster frame-rate that’s most significant here, particularly in a professional context. One video area where the Mavic does win, though, is that it can capture HDR video.

When you first see the DJI Mavic 2 Pro and Phantom 4 Pro V2.0, it’s safe to say that the Mavic appears to be the most attractive option, simply due to its size, weight, near-identical flight performance and, of course, the fact that both drones feature a 20MP 1-inch sensor.

Opting for the Mavic 2 Pro seems like a no-brainer, but then you discover that the Phantom 4 Pro V2.0 features a mechanical shutter and a faster frame-rate when shooting 4K video.

So it’s here where you have to make a trade-off. Can you live with the larger and heavier drone that produces more impressive video, which fits into more professional video workflows? Or do you go for the option that’s smaller, lighter and can still produce excellent 4K video, albeit at 30fps rather than 60fps, and with the potential for rolling shutter?

In reality, it’s likely that working professionals will own both drones and will use the best option when the job calls for it. Hobbyist shooters will most likely be more than happy with the smaller, lighter and more portable DJI Mavic 2 Pro. And photographers not worried about video specs can enjoy slightly better image quality for stills, too.

Ultimately, both drones are very impressive, and the deciding factor between the two is mainly down to a trade-off between camera and video features, versus size and weight.