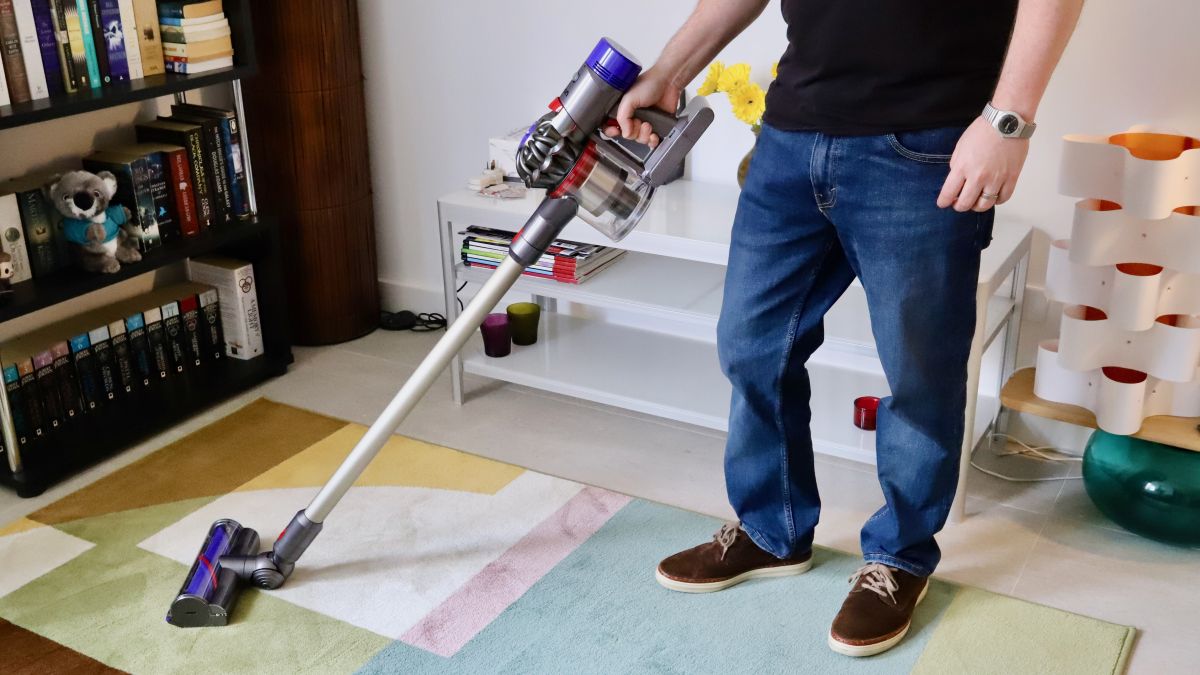 Despite its name, the Dyson V8 didn’t come after the Dyson V7. Confusingly, it followed the now-discontinued Dyson V6 in 2016, with the V7 series arriving a year later as the ‘lite’ version of the V8. But don’t be fooled by the V8’s age – it’s still one of the most popular Dyson handsticks available today and could replace a corded vacuum cleaner for many people, even if you have a pet in a home with wall-to-wall carpeting.

Like all the other Dyson handsticks, there are a few different versions of the V8 available. They all share the same motor and battery – the only real difference between them all is the number of extra tools they ship with.

The most basic Dyson V8 model is the V8 Origin (not available in the UK or US, but can be purchased in Australia), which only comes with the standard direct drive cleaner head and the combination tool. For its rather high AU$749 price tag, that’s not great value for money, even if it is a powerful tool. Instead, if you can spend a touch more, then the Absolute or Animal V8s (which are available in most countries) are far more versatile and offer better bang for your buck, thanks to the broader selection of tools included with them.

Design wise, the V8 is identical to its V6 predecessor, but it’s far from a simple upgrade. To put it all in a nutshell, the Dyson V8 has superior suction power than the V6, a much better battery life than even the V7, and is the first Dyson handstick to feature the current hygienic bin-emptying mechanism – and that’s with a larger dustbin than the V6.

Moreover, thanks to better sealing throughout the vacuum cleaner, the V8 also traps most microscopic particles, venting cleaner air that should help people with allergies.

The Dyson V8 isn’t just for floors – it quickly converts into a handheld minivac that can be used to clean upholstery at home, in the car, on the boat, or anywhere else you can think of. You can even get to ceiling corners without hurting yourself. If you can afford its highish price tag, the Dyson V8 might just be the only vacuum cleaner you will ever need.

As we mentioned earlier, the V8 is actually the oldest handstick model in Dyson’s current range. It was launched in 2016, but that doesn’t mean it’s particularly cheap. On the contrary, the starting price of the Dyson V8 is $399 / £349 / AU$749.

In the US and UK, that base model is the V8 Animal (in fact, it’s the only V8 model listed on Dyson UK’s website), while in Australia, that’s the V8 Origin. The other handsticks in this series are V8 Animal Pro+ (US), V8 Animal Extra (Australia) and V8 Absolute (available in most markets). The only difference between them are the color schemes used on the product and the number of tools they ship with.

Every single Dyson product has a design aesthetic that’s very appealing, and the same philosophy applies to the V8 as well. It looks similar to the older V6 (the newer model has a larger main unit) and identical to the current V7 models, with some minor differences in color schemes.

Like the V7, you get a transparent 0.54L dustbin which makes up the bulk of the handheld unit, with 15 small cyclone cones arranged in a two-tier flower shape in front of it. The handle is broad and comfortable, even for people with small hands, and the power button – which resembles a trigger – ergonomically placed just where your forefinger should be.

Above that there’s a HEPA filter encased in blue/purple plastic, with air vents on the sides.

Below the filter and air vents is the toggle switch to change suction power – there’s just standard and max settings to choose from on the V8.

A large red tab on the handheld unit with a bin icon is what you’ll need to pull when the dustbin needs emptying. This was the design change that Dyson introduced with the V8 – pulling on the tab forces the cyclone part of the main unit to rise, while forcing the base flap to open simultaneously. Lo and behold, dust, debris and hair falls out, with only a very thin layer of fine particles sticking to the interior of the bin.

As mentioned before, the V8 comes with a bunch of accessories, including a telescopic tube that’s perfect for general use. Every single tool clips on and off the main handheld unit easily, even single-handed. The standard direct drive head is great on pretty much any surface, but if you happen to buy the V8 Absolute, you’ll get a Soft Roller cleaning head that’s the best option for hard floors.

Using soft fibres and carbon bristles on a rotating bar, the Soft Roller is designed to glide directly over floors, and this means that if you have larger debris (like kitchen spills) that need cleaning up, they’re not scattered willy nilly. And, depending on which V8 model you opt for, you also get a low-reach adaptor that you can fit onto the end of the telescopic tube to get under couches and low tables.

No matter which cleaning tool you use, the V8 remains well balanced and, thanks to swivelling heads, moving the handstick along hard floors and carpets is a breeze.

Dyson has been improving suction power on its handsticks with each generation, but the V8 was the benchmark to work from. Despite an older motor, the Dyson V8 generates as much suction power as a budget corded vacuum cleaner, particularly when on its max power setting. And compared to the cordless competition, it can give even some newer models a run for their money.

On carpets, the motorized direct drive head does a fantastic job. It’s pretty good on hard floors as well, but if you can get the Soft Roller (or Fluffy) tool, there’s nothing like it on wood and tiles. Alternatively, you can use the mini motorized tool on hard floors, but its footprint is small, and you’ll need to go over the floor several times to finish a room. And that eats into the V8’s limited battery life.

Unlike the 30 minutes of ‘fade-free’ power you get with the V7, there’s up to 40 minutes of runtime available here. That, however, depends on both the suction power and the type of tool you use. The full 40 minutes is only available when you use cleaning heads that aren’t motorized (i.e. only use suction), like the crevice or combination tool. With the motorized direct drive and soft roller heads, you’ll get a top of 25 minutes on a full charge.

On the max setting, though, the V8 doesn’t do as well as the V7 – you’ll get no more than seven minutes of fade-free power. This may not seem like much (and, to be honest, it isn’t enough to cover even an average two-bedroom apartment) but it is a marked improvement over what the V6 offered.

If you live in a large home and 25 minutes isn’t enough to do a thorough deep clean, you’ll need to wait a full five hours before the battery is refilled at the mains.

As with the other Dyson handsticks, the V8’s edge-cleaning prowess is pretty darn impressive. Where other budget vacuum cleaners don’t have the power or the right design to ensure dirt along skirting boards and corners get sucked up, the V8 can handle the 90º angle in room edges and most corners as well. This is also helped by how well most of the cleaning heads swivel on their own axes.

Then there’s the two-tier radial cyclones that push air through 15 small conical chutes to generate a significant amount of centrifugal force that can suck up very small particles. Combine that with the V8 motor spinning at 110,000rpm and you’ve got a lean, mean, sucking machine that’s likely going to be the only vacuum cleaner you’ll ever need.

Should I buy the Dyson V8?

There’s absolutely no question that the Dyson V8 is a powerful appliance, capable of deep cleaning carpets with layers of pet and human hair entangled in the fibers. And that’s despite being the oldest model in the current crop of Dyson handsticks. If you can manage to finish vacuuming your home in about 25 minutes, it’s definitely worth every penny you spend on it.

You need a versatile cleaning appliance

Other than mopping, the Dyson V8 will look after your home for as long as it possibly can. And we’re not just talking about floors here. Whether it’s getting rid of cobwebs from the interior and exterior of the house, getting hair off your sofa and cushions, and even giving the car interior a once-over, the V8 can handle it all.

You have the money to spare

It might be getting on in age, but the Dyson V8 is not cheap. It’s significantly more expensive than the V7 series, although it is cheaper than the newer Dyson V10 and V11 handsticks. It’s possible to get the V8 for less during sales, but even discounted it is more expensive than some other brand’s cordless vacuum cleaners on the market.

You live in a large home

The V8 might offer a top running time of 40 minutes, but with the motorized tools that you’ll be using for general cleaning, battery life is only about 25 minutes. And then it takes five hours for a full charge. 25 minutes is roughly enough to get a small apartment cleaned up, but if you live in a larger home, you might want to consider a cordless with better battery life.

You’re on a budget

It’s remarkably easy for us to recommend the V8 to most people, but if you don’t have the spare change, we’d recommend getting one of the Dyson V7s when it’s discounted during a major sale. If you’d like something cheaper still, you may need to consider other brands like Electrolux, Bissell or Shark.

You need a larger capacity dustbin

Large homes, particularly ones with wall-to-wall carpeting and pets, might find that the V8’s 0.54L bin fills up very quickly, requiring frequent emptying. If you think the small bin may not be able to handle the load, you may need to spend the extra money on the newer Dyson handsticks, or a vacuum with a larger dustbin.