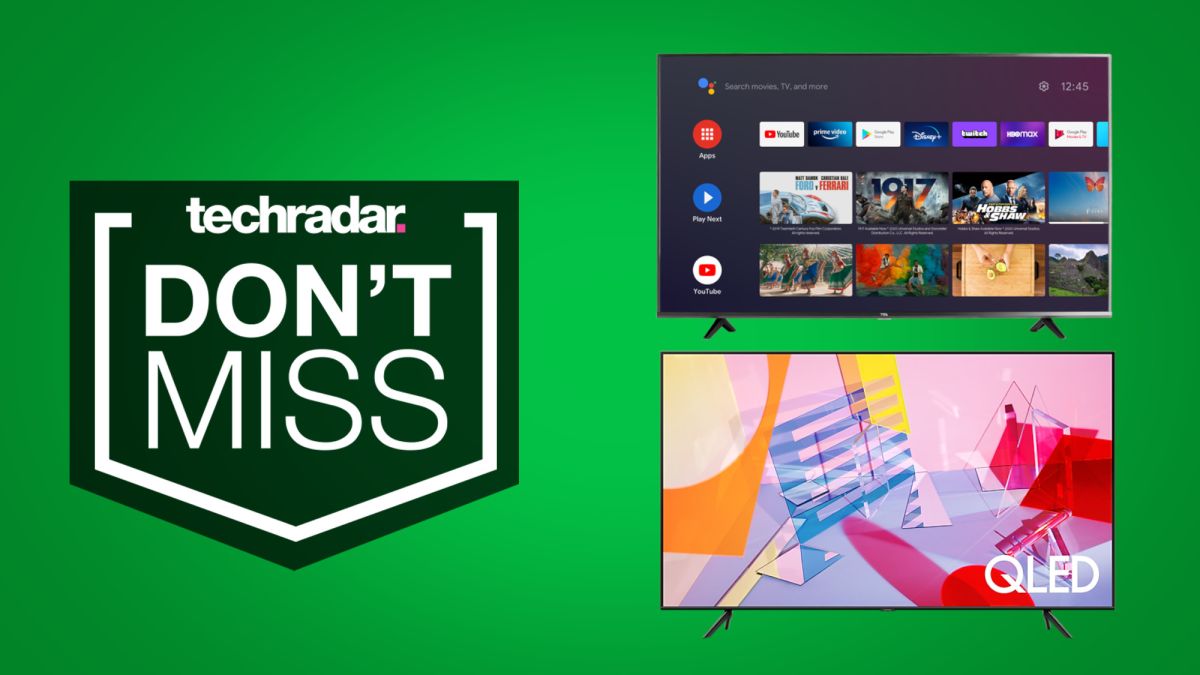 Green Monday is here, and with that, a ton of great TV deals to check out for those who didn’t manage to snag a great price at the end of November. Samsung, Sony, and LG are just some of the brands we’ve found awesome sales on today, but remember – this is likely the final chance to grab a cheap display by Christmas.

We’ve rounded up today’s best Green Monday TV deals into size sections just down below for those of you who already have something in mind. Right now, the best price cuts seem to be on the more premium and larger TVs, but there are still plenty of great options for budget displays too and we’ll be adding to our list as we spot more Green Monday TV deals today.

For those of you doing some last-minute 4K TV deals shopping before that Christmas deadline, we’ve also checked to see which TVs are available for delivery for the big day. The good news is most of the displays featured on our list are currently available for quick delivery, although of course, we wouldn’t recommend hanging around if you spot a TV deal to your liking.

Toshiba 32-inch Fire TV Edition HD TV: $129.99 at Amazon
Save $50 – This 32-inch Toshiba comes with Amazon Fire TV built right in for a super cheap and easy streaming setup. Sure, this 32-inch screen isn’t 4K, but for a back up or small set for the bedroom, it’s a perfect option that will work right out the box with Amazon Alexa. Arrives before ChristmasView Deal

Hisense 40-Inch H4 Series HD Smart TV: $209.99 at Amazon
Save $20 – The saving on this Hisense isn’t the biggest on our featured TV deals list, but this 2020 release still has plenty on offer for those on a budget. With Roku TV built-in and full Amazon Alexa compatibility, like the Toshiba above, this Hisense is a quick and easy display for the bedroom or study. Arrives before Christmas
View Deal

Insignia 43-inch NS series 4K UHD Smart TV: $239.99 at Amazon
Save $60 – Insignia might not have the brand recognition of LG or Samsung, but this 43-inch NS series is a great value option in today’s Green Monday TV deals. This 4K smart TV comes equipped with Fire TV and Amazon Alexa fully built in – not bad value at all if you’re looking for a one-stop inexpensive TV that’s useful right out of the box. Arrives before ChristmasView Deal

Samsung 43-inch TU-8000 Series 4K UHD Smart TV: $347.99 at Amazon
Save $22 – This 8000 series is one of the latest 4K TV’s to come out from Samsung and comes packed with a ton of great features. Full Google Assistant and Amazon Alexa support are included, as is one of Samsung’s latest 4K processors for speedy performance. Right now at Amazon it’s also got a neat little discount, bringing it to $22 cheaper than original retail. Arrives before ChristmasView Deal

Sony 43-Inch X800H 4K UHD Smart TV: $448 at Amazon
Save $151 – Another relatively new 2020 release, this Sony X800H 4K TV is a great mid-range option for those who want something a little more premium at 43-inchs. Fully compatible with all widely used smart platforms, this Sony also includes the latest Triluminos
and MotionFlow XR technologies, as well as Dolby vision support.
Arrives before ChristmasView Deal

TCL 55-inch 4 Series 4K UHD Smart TV: $279.99 at Best Buy
Save $120 – A fantastic price for a mid-size 4K TV, Best Buy has this TCL 55-inch TV on sale for just $279.99. The smart TV has the Google Assistant built in and includes a voice remote so you can control your TV and compatible smart home devices completely hands-free. Arrives before ChristmasView Deal

Samsung 50-inch TU-8000 Series 4K UHD Smart TV: $397.99 at Amazon
Save $32 – We’ve already featured the TU-8000 series from Samsung once on our list, but a similar saving is also available on the 50-inch version too. With Samsung’s latest 4K Crystal processor, Amazon Alexa built-in, and full HDR compatibility, this is a great mid-range option for most people. Arrives before ChristmasView Deal

Samsung 65-inch Q60T QLED 4K UHD Smart TV: $899.99 at Best Buy
Save $100 – The Q60T series are the most affordable QLED displays on the market right now but of course are still very much premium 4K TVs. With a high-end Quantum processor and Quantum Dot and HDR technology, you’re getting a very, very good picture here with plenty of support for both Amazon Alexa and Google Assistant too.
Arrives before ChristmasView Deal

Hisense 70-inch H65 Series 4K UHD Smart TV: $479.99 at Best Buy
Save $170 – This Hisense might be on the cheaper end of things, but that doesn’t mean it’s not packed to the brim with great features. With Google Assistant and Chromecast built right in, you’re off to a great start, and you’re also getting Motion Rate 120 and DTS Sound Studio – not bad for the price. Arrives before ChristmasView Deal

LG 70-inch 73 Series 4K UHD Smart TV: $527.99 at Amazon
Save $472 – There’s an absolutely eye-watering saving available right now on this LG 73 Series TV at Amazon – which brings it to almost 50% off. With a quad-core 4K processor, Active HDR, and in-built Apple HomeKit, this is a good choice if you want something that’s not just big, but fully featured as well. May arrive after ChristmasView Deal

Samsung 75-inch 6 Series 4K UHD smart TV: $699.99 at Best Buy
Save $100 – The Samsung 6 Series don’t feature QLED technology, but they’re still a great option for those who want to spend a little more on a feature-packed TV. With full HDR support, Amazon Alexa compatibility, and Samsung’s PurColor and UHD engine, you’re getting a great picture here and plenty of smart TV features. Arrives before ChristmasView Deal