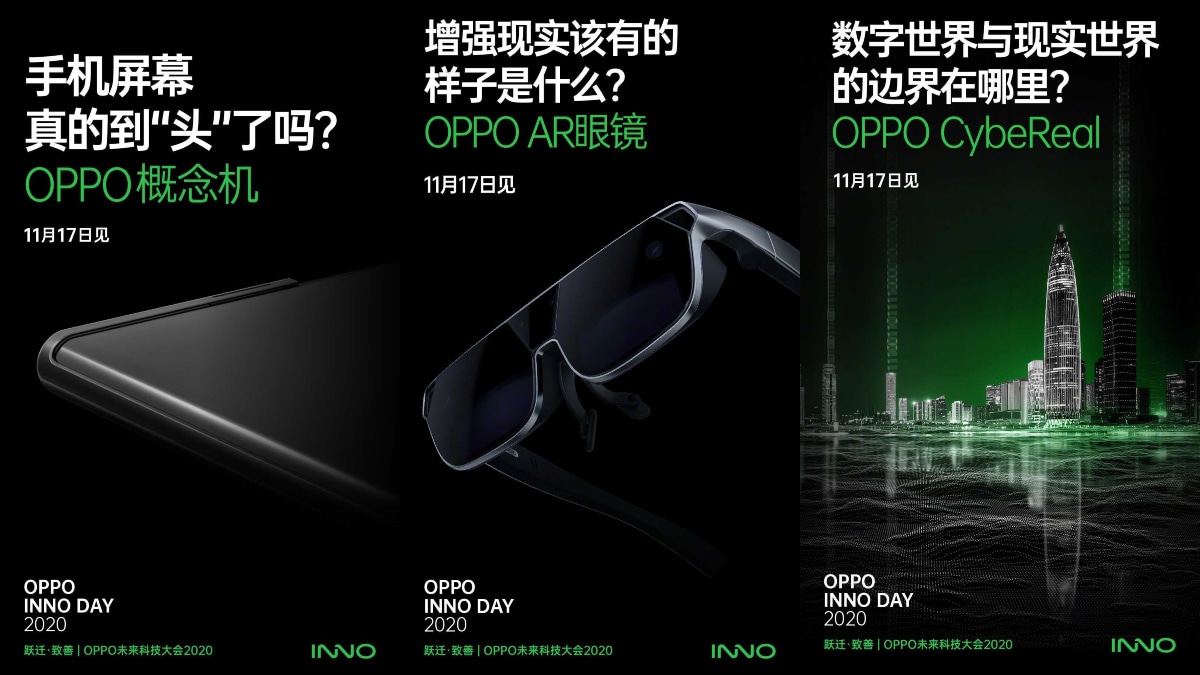 Oppo AR Glasses are all set to be unveiled on November 17 alongside a new concept phone and AR applications. The company is hosting a dedicated Oppo Inno Day 2020 event in China, and it has now confirmed that the AR glasses will be launched then. The IoT product has been teased in a poster and it looks to be just like the sunglasses you wear. The Oppo AR Glasses will likely be embedded with a host of sensors to enable an immersive experience for users. Alongside, the AR Glasses, Oppo has also teased the arrival of a concept phone, which may see innovation in the display screen.

The company has taken to Weibo to announce that it will introduce Oppo AR Glasses during its Inno Day 2020 event on November 17. The teaser poster has a photo of the glasses, and it shows that the Oppo AR Glasses look similar to sunglasses. There is a metal frame around the edges and additional black curtain frames to block surrounding distractions. It should look to offer an immersive experience, and the Weibo post says (translated), “Sit 3 metres away and enjoy the immersive experience of a 90-inch large screen.”

At the Oppo Inno Day 2020 event on November 17, the company also looks to unveil a concept phone. The Weibo teaser suggests that it looks to offer an innovative take on the display screen. A partial glimpse of the phone is offered and it is seen to sport curved edges. It could be a foldable phone with a clamshell-like foldable screen, or the one offered on the Galaxy Fold range. In any event, this will just be a concept phone and isn’t expected to be launched commercially.

Apart from these products, Oppo has also teased the arrival of a spatial computing AR app that looks to offer interesting superimposed views in the virtual world. More details on this should also be offered during the event on November 17.

Tasneem Akolawala
Tasneem Akolawala is a Senior Reporter for Gadgets 360. Her reporting expertise encompasses smartphones, wearables, apps, social media, and the overall tech industry. She reports out of Mumbai, and also writes about the ups and downs in the Indian telecom sector. Tasneem can be reached on Twitter at @MuteRiot, and leads, tips, and releases can be sent to [email protected]
More