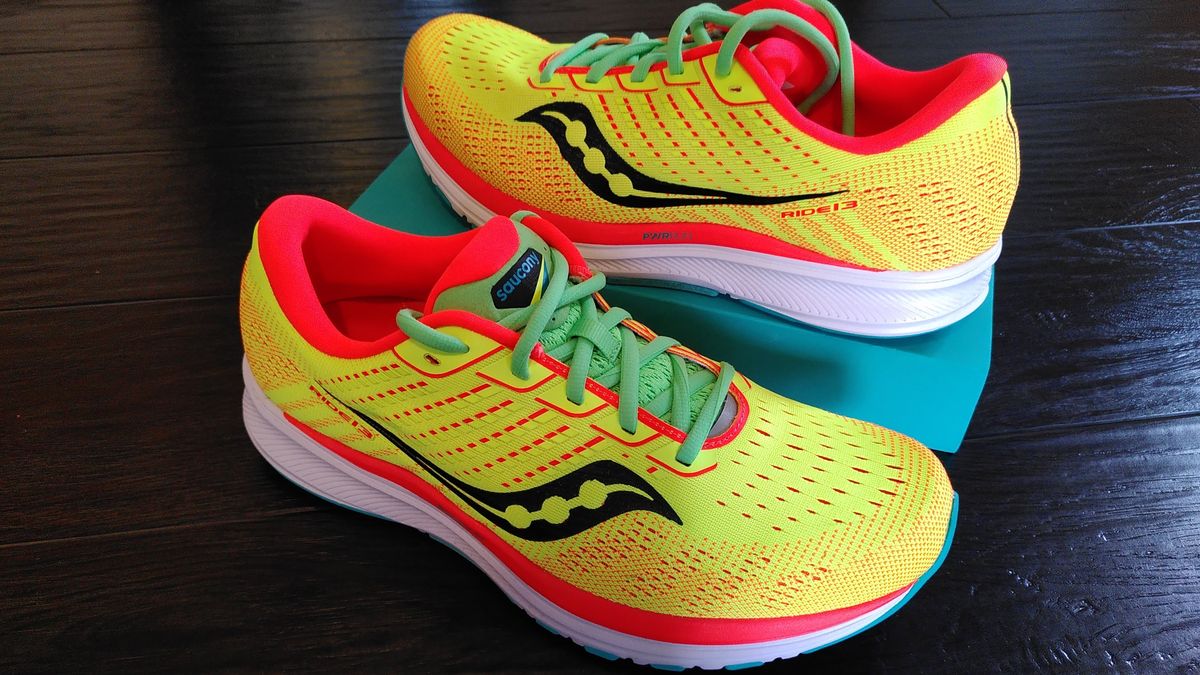 The Saucony Ride 13 is a follow-up to the popular Ride ISO 2, and makes relatively few changes to its overall design. Saucony says that its aim was to create another all-purpose neutral shoe that works equally well for training and race day, without being excessively bouncy or firm.

It’s an aim that we’d say it’s achieved. Although we found that the Ride 13 lacked a little heel grip until it was broken in, it proved comfortable enough that we were basically able to forget about it, even on long training runs.

It’s significantly lighter than the Ride ISO 2 thanks to a change in midsole material, with just enough padding to provide comfort without excessive springiness. Unremarkable, but in the best way.

The Ride 13 is an evolution rather than a revolution, and its overall design hews close to that of its predecessor, with the main difference being a change in materials.

It has the same 8mm heel/toe offset as its predecessor, but whereas the Ride ISO 2 featured Saucony’s PWRFOAM mid-sole, the Ride 13 uses the company’s new PWRRUN material, which is substantially lighter and claimed to be three times as durable.

There’s a choice of two laces included with the shoe, both of which are made from a soft, stretchy material (more on those shortly).

Like this year’s Endorphin Pro (Saucony’s first racing shoe to feature a carbon plate), Endorphin Speed and Endorphin Shift, the Ride 13 is available in a super-bright colorway known as ‘Mutant’, as well as more subtle Charcoal and Alloy for men, and Blush and Alloy for women.

The shoe is available in a regular and wide in both men’s and women’s sizes.

Overall, we’d say the Ride 13 achieves its goal as a balanced neutral shoe for everyday training. We particularly appreciated the snug fit provided by the Formfit upper, which feels reassuringly supportive even when the shoe is new. We found it a little lacking in heel grab for the first 10 miles or so, but this eventually reduced as the shoes wore in.

Those stretchy udon noodle laces provide good grip with minimal risk of slipping. Their considerable give means that you might not be able to achieve a super tight fit, but it provides a good balance with the close-fitting upper.

The toe box of the standard width shoe might prove a little narrow for with wider feet (we found it a little snug until the shoes had a chance to break in, so if possible it’s worth trying both the regular and wide versions if your feet are on the broader side.

The Mutant color scheme took some getting used to, and is an attention-grabber in daylight hours, but it makes a lot of sense for early morning and evening runs, when it proves very helpful for visibility. We also appreciated the small reflective elements (which you also get with the more subtle colorways).

Durability is hard to judge at this stage, but we’ve seen no evidence of premature wear such as cracking of the outsole so far. We look forward to putting plenty more miles into them, and will update this review accordingly once we do.

You need a dependable all-rounder
The Saucony Ride 13 is a good jack of all trades, and should serve you well over a wide range of distances in both training and races.

You have wider feet
The FormFit upper will adapt to the shape of your feet for a close but comfortable fit, but there’s also a wide fitting available for both men and women who find it too snug.

You like a very tight fit
The soft, stretchy laces have quite a lot of give, which limits how tightly they can be tied.

You overpronate significantly
The Ride 13 isn’t a stability shoe, so if you tend to overpronate then you’re better off with the Saucony Guide series.