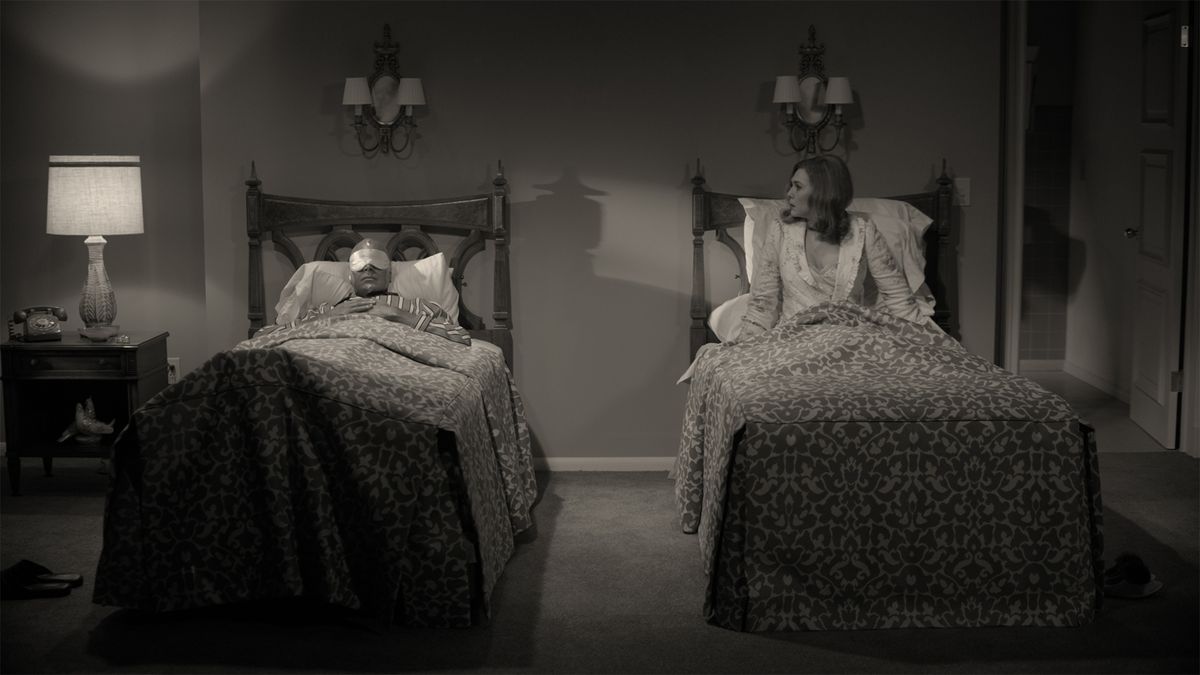 It’s the middle of the night. A noise outside the bedroom window disturbs Wanda, so she uses her powers to flick the lights on, waking Vision. He gets up to look out of the window, but all he can see are the rose bushes. “Are you using your night vision, Vision?” she asks, but he assures there’s nothing amiss… Until another bang prompts him to hide under the covers.

He says that some friends in the office had mentioned some ne’er-do-wells in the area – though Wanda wonders if they might have been referring to a couple who walk through walls or move objects without touching them. After another bang, Wanda uses her magic to pull their twin beds together, and open the curtains. As they applaud themselves for resolving the situation – and for Wanda’s impromptu redecoration – Wanda turns the beds into a double. Vision tells her to get the light and they dive under the covers for a very different reason than before.

Following some Bewitched-inspired animated credits, a top-hatted Vision is rehearsing a magic act, asking Wanda to wheel out the “Cabinet of Mysteries”. As Illusion, he’s planning to make his assistant, Glamour, disappear – and when he taps the wooden cabinet, she’s vanished behind a fake wall in the closet. He’s worried that the trick looks too fake, but she points out that’s the whole point of a magic act – and that it’s their neighborly duty to participate in the talent show fundraiser. She also thinks it’s their chance to appear as normal as possible, and she wants them to fit in.

They both abandon the rehearsal for meetings: Wanda to the talent show planning committee, Vision to the local neighborhood watch – he’s keen to make sure security is as good as possible after the previous night’s disturbances.

Wanda hears a mysterious bang outside. She sees a toy helicopter in the bushes, standing out as vibrant red and yellow against the monochrome surroundings – just to add to the mystery, there’s a SWORD (Sentient World Observation and Response Department) logo on its side. As Wanda considers what she’s holding, she’s interrupted by Agnes who’s brought round Señor Scratchy, a rabbit for the magic show. Wanda and Agnes leave for the meeting, Agnes explaining that influential committee head Dottie is the key to getting on in the town, and that it’s worth making an effort to impress her. Wanda asks if she can just be herself – a suggestion Agnes finds hilarious.

As Dottie lectures the committee members, Wanda starts chatting with Geraldine, another attendee at the meeting. Dottie scolds Wanda for talking at the wrong times, and shows bizarre control over the other women – any use of the phrase “for the children” prompts the audience to reply in unison. “How is anybody doing this sober?” asks Agnes.

Vision arrives at the meeting in the library and is told it’s a members-only type deal. He says he’ll wait there until they get to “new business”, but when they say they’re just about to get to “new business”, it turns out that really means eating danishes. Vision accidentally admits he doesn’t eat, leading to some backtracking as he tries to join in their top secret (but not very interesting) gossip by suggesting that “Norm is a communist”. The group laugh wildly, and decide Vision isn’t as square as they thought. He’s even offered a stick of chewing gum which – reasoning that it’s “purely for mastication” – he accepts. Unfortunately, he accidentally swallows the gum and – as shown in an animated representation of his insides – it clogs up his Synthezoid workings.

Wanda helps Dottie to clean up. Wanda asks why they’ve got off on the wrong foot – Dottie says she’s heard things about Wanda and Vision. Wanda assures her she doesn’t mean anybody any harm, but Dottie doesn’t believe her.

They’re interrupted by a mysterious message on the radio, a man’s voice saying “Wanda. Wanda, can you read me, over?” “Who are you?” asks Dottie, before the radio explodes, shocking her into breaking her glass. Her hand is cut, and her blood shows up as vivid red.

In this week’s commercial break, a James Bond type advertises Swiss-made Strücker watches, with the slogan “He’ll make time for you”.

At the talent show, Wanda waits nervously backstage. Vision arrives late, stumbling and looking dishevelled – another animation shows that his insides are still gummed up. Wanda tries to explain the weird happenings with the helicopter and Dottie, but there’s no time. Dottie reminds the audience it’s all “for the children” – they all recite the line back – and introduces Vision and Wanda’s act.

Vision stumbles over his lines as if he’s drunk. He tells them, “Today, we will lie to you and yet you will believe our little deceptions, because human beings are easily fooled due to their limited understanding of the inner workings of the universe.” He starts the act by using his powers to levitate, baffling the audience – forcing Wanda to magic up a rope and pulley to maintain the illusion of a fake illusion.

She subsequently keeps their cover intact by turning a piano into a cardboard cut-out after Vision picks it up with one hand, and creating some mirrors when he phases a top hat through his body. The performance is a massive hit, especially after the showstopping final trick where a very confused Geraldine materializes in the Chamber.

After the act is done, Wanda identifies Vision’s problem and uses her powers to remove the gum. He starts to recover instantly, realising he’s not as funny when he’s not blocked up. Worried they’ve blown it with the town’s residents, they try to make a fast getaway. They’re spotted by Dottie, however, and she awards them with the inaugural award for Comedy Performance of the Year. They invite Geraldine on stage to share the applause – but they still won’t tell her how they did the trick. Another chant of “For the children” echoes through the audience.

Wanda and Vision get home and compliment each other on the performance, joking about the whole thing being “for the children”. When they get up from the sofa, Wanda is suddenly pregnant. “Is this really happening?” she asks – Vision assures her it is.

There’s more banging outside the front door. Initially they can’t see anything, until someone emerges from a manhole. It’s someone in a beekeeper’s suit – and they have the SWORD emblem on their back.

“No,” says Wanda, and rewinds the action to the point where she asked, “Is this really happening.” Things unfold differently this time, however, and Vision’s head goes Technicolor – followed by the rest of their front room and Wanda. They kiss as the scene dissolves into the credits.

“Wanda? Who’s doing this to you, Wanda?” asks the voice on the radio. “Wanda?”

Could chewing gum have defeated Thanos? If it can turn a robotic superbeing who can phase through walls, fly and instantly carry out incomprehensible calculations into an incompetent (but harmless) stage magician, it would certainly have been worth a try. Whatever the results, Infinity War would have turned out very differently.

That we’re even asking the question shows how much two half-hour episodes of WandaVision have transformed the Marvel Cinematic Universe. You’re constantly struck by the boldness of a decision to take two frontline Avengers, and give them a spin-off where jokes and canned laughter are as essential a part of the mix as superpowers. It’s an unlikely scenario, but the brilliant comic timing of Elizabeth Olsen and Paul Bettany makes sure it works like a charm.

After episode 1’s pitch-perfect dissection of 1950s sitcom conventions, the destination this time is the ’60s. It’s just as wonderfully realized, from the Bewitched-style animated credits to larger scale production values that expand the cast, and move the action beyond the confines of studio sets. The attention to detail is impressive – the fact that the television set has now become the centerpiece of the front room, or that Wanda wakes up in the middle of the night with her hair perfectly coiffed, are subtle but brilliant details that make WandaVision a clever and fun journey into TV history.

But alongside the comedy, this episode really ramps up the MCU components of the story. What’s making the noises in Wanda and Vision’s garden? Why did a modern helicopter toy (featuring a SWORD logo) appear in full color? Who’s the voice calling out to Wanda through the radio? And who’s the “beekeeper” who appears from the sewers in the last act?

As the show dripfeeds its many mysteries, the biggest questions now concern Wanda’s instant pregnancy – is it connected to the Westview residents’ disconcerting “For the kids” mantra? – and how much control she wields over this strange world. The fact that she can rewind time to change events implies she’s more than just a mere bystander.

As the Wizard of Oz style explosion of color in the final scene suggests we’re still learning the rules of the WandaVision universe, chances are we’ll be asking more questions before we get significant answers.

New episodes of WandaVision are available every Friday on Disney Plus.