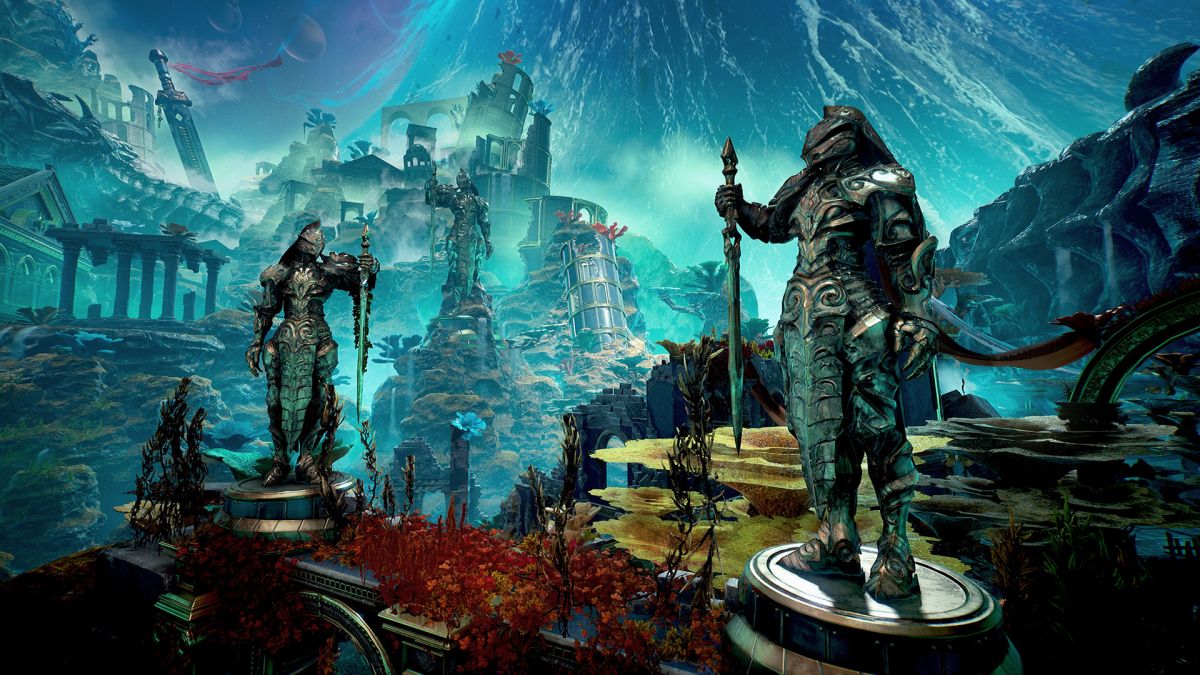 Godfall’s world of Aperion is a new one – and one that hasn’t been explored yet. Being a new IP, this gave the game’s composer, Ben MacDougall, plenty of room to experiment with. He tells TechRadar that his training as a flute player really shined through in the game’s soundtrack, with the instrument giving the game a more melodic influence. Aperion has no existing associations, so MacDougall took inspiration from the world itself, and discussed both the characters and story of how the world came to be with director Keith Lee.

Sonically, MacDougall utilized a large orchestral sound for an expansive soundtrack, as an epic tale requires an epic score. An orchestra is capable of creating both sonic mayhem and beauty equally. He had been playing in symphony orchestras for many years, so writing one felt natural to him, saying, “When you combine that more traditional writing-style with my fascination for making instruments and warping them into new sonic forms, you suddenly have something that feels new, but also grounded.”

MacDougall noted that it’s the contrast between quiet moments and the loud moments. For him, one of the most interesting challenges with Godfall was to find a balance between cues that offer moments of comparative serenity in the otherwise tense, violent world of Aperion while also considering different levels of combat intensity. The mix between the game’s soundtrack and the sound effects coming from weapons, enemies, and environments, all come to life through the power of new hardware.

Travis Fox, senior producer at Counterplay, says that with the processing power of next-generation consoles, designers are more intentional when crafting different sounds in a sequence and adding additional layers to the game world.

“We can better balance the different aspects of what is happening on screen to ensure players hear every important detail from the environmental music scores to every individual impact along a single sword swing and everything in between,” he explained.

Travis Fox, senior producer at Counterplay, says that with the processing power of next-generation consoles, designers are more intentional when crafting different sounds in a sequence and adding additional layers to the game world.

“We can better balance the different aspects of what is happening on screen to ensure players hear every important detail from the environmental music scores to every individual impact along a single sword swing and everything in between,” he explained.

MacDougall explains that, had Godfall utilized the PS5’s 3D audio features, the sound experience would have been even more vastly improved.

3D audio allows for more spatialization of sound, which is how and where a particular sound sits inside of, and interacts with a 3D environment. Within the context of PS5, the spatialization of sound is how the hardware and software works together to take an audio file and place it dynamically in a scene so that it appears to “exist” inside of the world of the game. However, Godfall’s soundtrack, as well as the music in most games, is not so much a spatial element as it exists outside of the game’s world. This means that the game’s score is recorded outside of the game, rather than using in-game sound. If Godfall’s orchestra was recorded in a given space inside the game itself, it would have been transformative for its music.

MacDougall explains that if the orchestra was in the same room that a fight is taking place, then it would have a “real” position and would be subject to utilize PS5’s 3D audio spatialization. “So, if your back was to the orchestra then it would sound like they were behind you, and so on. But, because the music doesn’t physically ‘exist’ in the world of Aperion, then it doesn’t have to follow that same set of rules,” he explained. While Godfall’s soundtrack doesn’t take advantage of PS5’s 3D audio feature, MacDougall was still able to create a unique sound for the game’s score.

Aperion is a brand new world with new experiences

When comparing Godfall to his previous work on Counterplay’s previous game, Duelyst, MacDougall explains that while both are in the fantasy genre, the former’s musical scope is much bigger. MacDougall explained that there’s about 2.5 times more musical content and that players are immersed in such a beautifully exquisite and exceptionally detailed world. Aperion is full of environmental cues, all the way from leaves that dapple in the sunlight to cold mists that engulf structures.

MacDougall used the gorgeous environments to his advantage, as it was impossible for Godfall’s scenery to not elicit a response from players. Fox also mentioned that each of the areas, such as Earth, Water, and Air all have unique sounds to go along with the fantastical environments.

Within Aperion, Fox said that many of the enemy’s sounds consisted of mixing both real voice-overs with real monster sounds to help create unique ones in order to help players differentiate them from one another. Sound effects also have a big role in Godfall’s “looter-slasher” melee combat. Since melee attacks can hit many enemies at once, it was important to reinforce each of those impacts across the variety of weapons in the game that are glowing with energy when they make impact with different bits of armor enemies wear.

“Who is hitting who with what, which armor type are they wearing, what weapon are they holding, is the hit critical, etc. – all factors went into what is heard during each attack. A single swing of a given weapon can produce many distinct impact sounds depending on many factors,” Fox explained.

Extra attention was put into creating visceral and satisfying sounds for Godfall’s combat and the moment-to-moment gameplay. Counterplay focused on perfecting the feeling of throwing and catching your shield, as well as how satisfying it was to perform quick takedown attacks during the heat of the moment while cooperative partners are unleashing offensive attacks.

Of course, there’s also the loot that comes pouring out of enemies when you defeat them. Each piece of loot has its own sound when it’s being spawned from a chest. It creates a fountain-type effect when all the pieces of loot come flying out and bouncing across the ground before some transform into morphstones. There are subtle changes between the different rarities with Epic and Legendary loot that are intended to grab players’ attention and be celebrated when collected.

Experimentation is key to making Aperion feel fresh and alive

Fox added that the team over at Counterplay had a lot of fun playing around with this sequence and implementing different techniques to make everything sound satisfying. “We’re excited for players to experience the beautiful music tracks across the different environments and combat tracks that reflect the intensity and character of the fight,” he continued.

MacDougall recalled that Godfall was always going to be an ambitious undertaking, and that its score became a comprehensive collection of sweeping cinematic moments, heart-pounding combat sequences, and worldly ambient music.

Godfall, as with all big projects, brought new challenges every day. Whether it’d be the technical challenges of recording and mixing a score of this scale, or the moments late in the night when figuring out a way to make something “pop” just a little bit more. MacDougall said, “At the end of the day, we all serve the game, and as such, I’m thrilled that people are finally able to get stuck in, and dive into the mystical world of Aperion, and everything that it has to offer.”