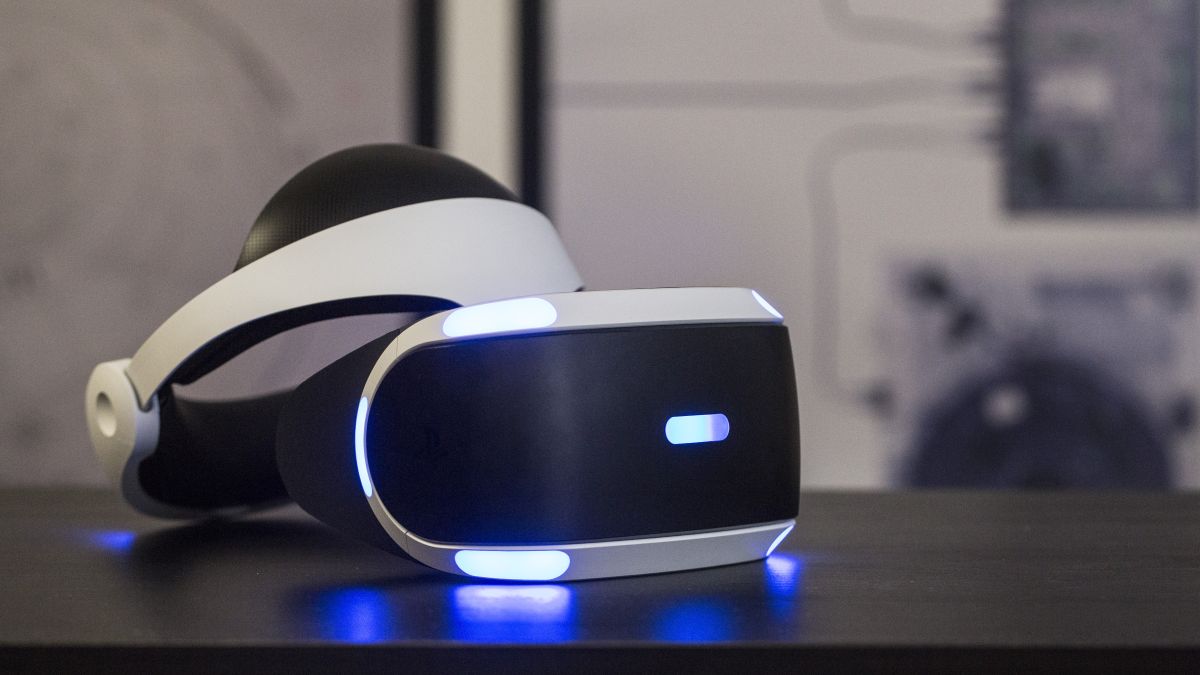 PlayStation VR was launched in 2016 and is now the best-selling high-end VR headset ever.

It’s not surprising, given how tempting a purchase it is if you already have a PS4. Why shell out for a high-performing, room-tracking, PC-tethered headset from Oculus or HTC, when you can just plug something into the console under your telly?

As of August 2018, Sony revealed it had shifted more than three million PSVR systems, while 21.9 million VR games and apps had been sold along with the headset.

But even removing sales from the equation, the PlayStation VR has become a game-changing piece of hardware in more ways than one. We’re confident that over time Sony will continue to boost its VR (and possibly even AR) offerings over the coming years, and the rumors are that a Playstation VR 2 isn’t far away.

The word on the Sony street is that the PSVR 2 will tie into the PlayStation 5 release, as the headset could take advantage of the new console’s upgraded hardware. As for the headset itself, it’s possible it could house an ultra-high resolution display manufactured that boasts 1,001 pixels per inch. Fingers crossed.

For more about what we’re expecting from the new headset, visit our dedicated PlayStation VR 2 hub.

PlayStation VR and barriers to VR

But let’s not get ahead of ourselves, the current PlayStation VR headset brings the world of virtual reality to your console in a big way. And what really sets it apart from the rest is that it does so without the cost most often associated with rival higher-end VR headsets, like the HTC Vive or Oculus Rift.

Because although these higher-end headsets cost more to run, you also need a pricey gaming PC that can power them, which is a huge barrier to entry for most people.

For this reason (and many more, as we’ll get into) the PlayStation VR virtual reality headset is still going strong nearly two years after its initial release. That might start to change as VR companies venture into more affordable products, like the Oculus Go, but for now the PSVR is the best for your money.

And Sony is certainly serious about virtual reality. We’ve had solid evidence that it’s committing a great deal of time and energy to VR development by the PlayStation VR games that have been released, and those yet to come.

To cap it all off, a revised headset has been released in late 2017, which addresses the original headset’s lack of HDR-passthrough, a better audio experience and overall comfort. The future’s bright for Sony’s VR gear.

PlayStation VR versus the rest

For now at least, the PlayStation VR is truly different to anything else on the market. While Oculus Rift has closed in on the cost disparity, the PSVR only requires a PS4 console to run, not an expensive PC setup.

Although we’ve already mentioned the Oculus Go as a rival, it doesn’t offer the immersive gaming quality the PSVR does. So although it’s a good way into VR for lots of people, it doesn’t quick match up.

When you think about it, it really is remarkable that the affordable PSVR solution is as capable as it is. It has its problems, but by and large the PlayStation VR proves that not only is console VR viable, it’s actually enjoyable, too.

Some of these titles were more fun than others, obviously, but all of them made the same point: PSVR doesn’t suck. Before we go on talking about PlayStation VR’s finer points (and foibles), let’s get the basics out of the way.

At launch, the PlayStation VR headset had a slightly confusing sales proposition. With the package re-using existing PlayStation peripherals such as the Move controllers and Camera, the PSVR headset itself was sold separately in some instances, despite the other components being vital parts of getting everything up-and-running.

If you didn’t already own the PlayStation Camera or Move Motion Controllers, the PSVR Launch Day bundle was the better bet, but now we’re further down the line the bundles – and the messaging around exactly what components you’ll need – are much better.

As of August 21, you can find PlayStation VR DOOM VFR bundle for $261.99 in the US, which includes the headset, camera, and a DOOM VFR Blu-ray disc. There’s also a Skyrim VR bundle for $349.99. Both of these prices are $150 less than their original listing price.

Besides the PlayStation VR unit itself and the PlayStation Camera, all you’ll need is a PS4 (either the Slim version, the three-year-old original or the ultra-powerful PS4 Pro will do), a PS4 DualShock 4 controller and a 6-foot-by-10-foot play space that’s well lit, but not too bright.

Setting up the PlayStation VR unit can be done in a matter of minutes and the provided instructions offer a clear visual guide to get you up and running.

How does PlayStation VR work?

Like other virtual reality headsets on the market, PlayStation VR has the arduous task of completely immersing you in a video game by producing two images simultaneously and then sending them to a headset a few feet away. But unlike competing devices (which require expensive graphics cards to get the job done), PS VR can do it using only the PlayStation 4’s built-in GPU.

It achieves this by using the PlayStation Camera to track nine different points of light on the headset, plus the lights on either the Move controllers or on the DualShock 4, depending on which game you’re playing.

It’s surprisingly accurate given the fact that it’s only using a single camera to track what’s happening… but it’s not foolproof by any stretch of the imagination. We’ll cover performance in detail in a minute, but be prepared for the camera to lose track of the controllers. A lot.

But the real bummer here is that because Sony only uses one camera instead of two, it’s harder for PlayStation VR to track you if you get up and walk around than it is for a system like the HTC Vive, which can offer true room-scale VR.

If you decide to get up and wander around, the PSVR can follow you to an extent, but don’t expect to take more than a few steps in any direction without a warning from the system that you’re straying too far away.

To that end, most PlayStation VR games can recommend that you stay in one of two positions, either sitting down or standing up and stationary. If you’re prone to motion sickness, sitting down might be a bit more comfortable, but certain games are definitely better played on your feet.

Depending on where and how you angle your camera, switching between standing and sitting might not be so easy, so it’s best to find an angle that covers the majority of the room in case you want to switch from one to the other without having to get up, move the camera and recalibrate.

But let’s back up. Up until now, the words “VR” and “virtual reality” have been thrown around a lot without much explanation.

VR has existed in one form or another for decades, but the modern version of the technology is more immersive and less nausea-inducing than it’s ever been. In more or less words, virtual reality is just that – a virtual world that gives you the experience of being somewhere else in a different time, at a different place – sometimes as far as an alien world, all without ever leaving your home.

And yes, it’s just as cool as it sounds.

If you want to be specific about it, PlayStation VR can handle 1080p games on its 920 x RGB x 1080 OLED display at either 90Hz (meaning that the image refreshes itself 90 times per second) or at 120Hz depending on the VR game or application.

And for those concerned about latency, Sony says that PlayStation VR’s response rate is locked in at around 18ms – which is about 0.002 seconds faster than the highest acceptable latency before you would notice the lag in VR.

Those numbers are great, but they’re matched by both the HTC Vive and Oculus Rift. The one advantage Sony has that neither Oculus nor HTC can claim is that it’s actually a world-class game publisher. While the other two have been trying to create connections with developers over the past few years, Sony already has them.

As a result, the best PlayStation VR games list is being constantly updated with excellent fresh experiences, with plenty more arriving all the time. From shooters to puzzlers, platformers to narrative adventures, there’s variety and depth to PSVR’s growing gaming catalogue.

There’s also another piece of hardware to consider when looking at buying a PlayStation VR, and that’s Sony’s brand-new, ultra-powered PS4 Pro.

With additional processing power, the PS4 Pro is capable of creating an even more immersive virtual reality experience for the games that support it.

The improvements PS4 Pro promises can take many forms – from more detailed textures to better draw distances, and even a small reduction in graininess. The advantages differ from game-to-game, and the PS4 Pro is currently setup to only support games where the developer has enabled “Pro Mode”, a hardware boosting technology that tells the PS4 to use extra processing power.

While writing the PS4 Pro review, we got the chance to try the upgraded hardware with the PlayStation VR and the results were noticeable, if a bit underwhelming in reality.

There’s definitely a distinct difference between PS4 and PS4 Pro versions of VR games. However, it’s probably not one that can be spotted by the unwitting non-techie – it’s something that you can only spot if you’re paying close attention to how certain textures look in-game or how objects look in the distance. Lag felt less prevalent on the Pro system, though in all fairness, it wasn’t something we felt was a major problem while using the standard issue console.

Whether the minor improvements are worth paying extra for the more powerful hardware is ultimately a decision we’ll leave up to you; however, it’s our opinion that you can get by with a standard PS4 just fine.

To read about PlayStation VR’s games, performance and design in more detail, head on over to the next page.