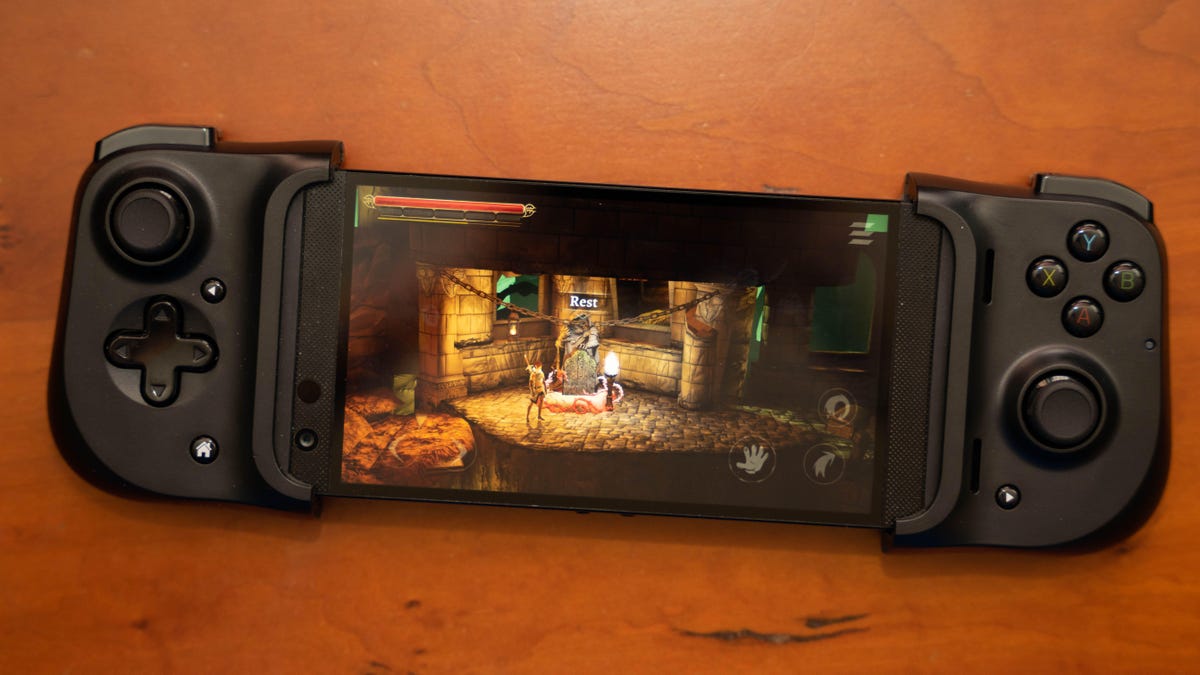 The Kishi’s larger design allows for a more solid grip, and it has the familiarity of the Xbox and Nintendo Joy-Con Pro controller layouts. It’s not a perfect emulation — the controls are differently spaced from each other than on those other controllers and the feel may not be to everyone’s taste — but it’s one of the most elegant, usable controllers for mobile gaming I’ve tried.

The Razer Kishi for Android is available now for $80 (£80, AU$150). The company expects to ship an MFi-certified model for iOS in August.

It’s far less finicky about compatibility than the Junglecat, which requires special cases and therefore specific phone support. The Kishi will fit any phone with a USB-C connector in the middle of the bottom and dimensions of 15.7 to 6.4 by 2.7 to 3.1 by 0.3 inches (145.3 to 163.7 by 68.2 to 78.1 by 7.0 to 8.8 mm). That encompasses most modern flagship phones, notably the Samsung Galaxy S20, S20 Ultra and possibly the upcoming Note 20. Razer’s own phone, the Razer Phone 2 is actually a hair too big to fit comfortably, so the company offers a kit to address that. I didn’t realize that when I started testing with the Razer Phone 2: It still works, but requires more force to insert than you want to apply.

The two sides are attached to each other via an elastic tether with a plastic plate in the middle. You slip one end of the phone into the right side USB-C connector and the other over the top. The ends sit in rubber indentations, and the plastic sits on the back of the phone. This gives you somewhere to rest your fingers that’s not slippery like the backs of most phones and that’s even with the back of the controller rather than recessed. When you’re not using the Kishi, that plate snaps the two sides together.

Watch this: Evercade plays 100s of retro games and it doesn’t suck

There’s a USB-C pass-through connector for charging the phone — audio dongles won’t work with it — and the location doesn’t interfere with using the controller.

Like a standard controller, it’s got two clickable analog thumbsticks, a D-pad, ABXY buttons and left and right triggers and buttons. There’s a Home button, and back and forward buttons emulate menu and view. The D-pad feels especially mushy to me, as do the triggers, and the thumbsticks are too tight and springy. It’s possible to get used to them, though I don’t think I’ll ever like the feel of the D-pad.

If you’re relying on muscle memory, the positioning of the thumbsticks might pose a problem as well. They’re offset from the center of the buttons rather than aligned with the sides of the ABXY buttons and the D-pad, so you may over- or underreach. And while many gamers probably know the ABXY buttons by heart, newbies may find the low-contrast, thin-typeface labels too hard to see when moving fast. (Frankly, I wish they lit up on all controllers so I could find them in the dark).

You don’t need to install the Razer Kishi app to use the controller, but it is required for any firmware updates and it can suggest games that support controllers. I found that some controller-supporting games, like Oddmar, didn’t work with the Kishi. But the controller felt as responsive as you’d expect, flying through platformers and fighting through monsters and undead hordes in mobile games including Grimvalor, Teslagrad, Destiny 2 on Stadia and more.

The Kishi makes the phone setup wider than a Nintendo Switch — about 10.5 inches (267mm) on the Razer versus 9.4 inches (239mm) for a Switch plus Joy-Cons. Again, that might feel odd for some people.

Smaller and lighter than a full-size controller and less lag-prone than a Bluetooth wireless model, the Razer Kishi is on the expensive side compared with its more traditional rivals. But it’s a neat gadget if you spend a lot of time gaming on your phone and you can afford to splurge a little.