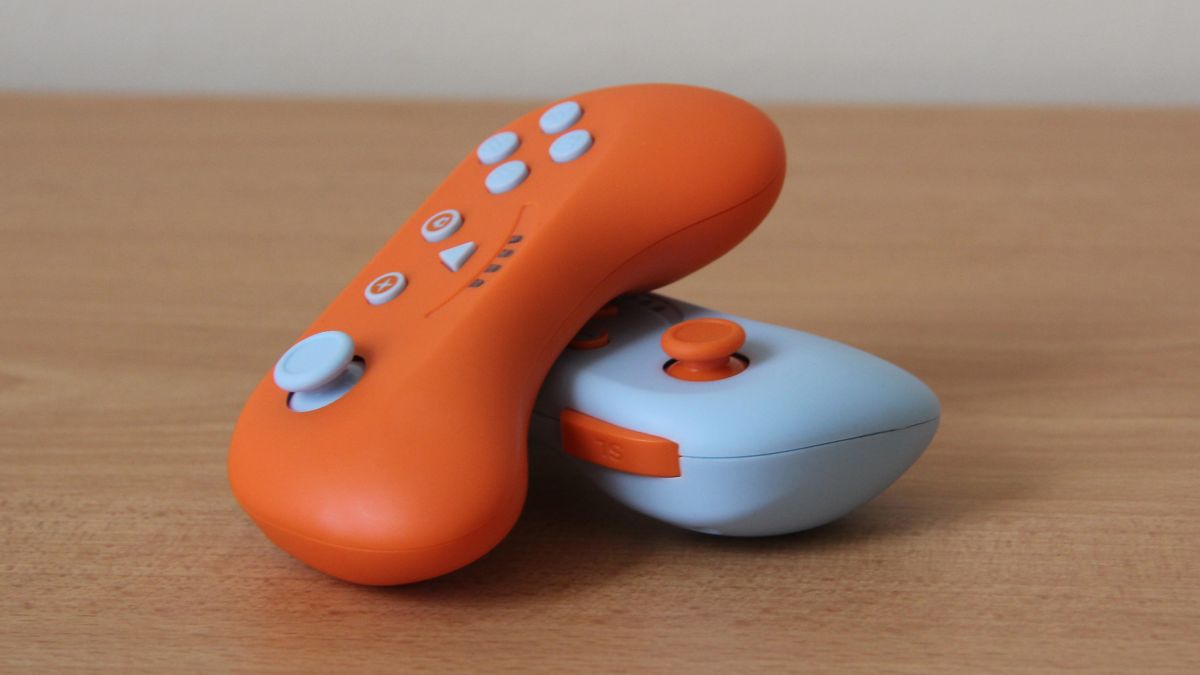 Known for its gaming accessories and peripherals, Germany company Snakebyte has moved into the ‘Joy-Con’ market, releasing the Multi:Playcon controllers for the Nintendo Switch.

These unofficial Switch controllers are aimed squarely at those wanting more controllers for multiplayer games, but for much a much lower cost than Nintendo’s official Joy-Con controllers. However, you get what you pay for, and the Playcon controllers don’t hold a candle to the Nintendo Switch’s originals.

The baby blue and orange color scheme makes the two controllers seem quite childish at first glance, though they are also available in black and white.

There are four LED lights in the shape of a smile on the front of the Playcon controllers below the new mode button, + or – buttons respectively and the snapshot or home buttons respectively. There’s also an L and R button on the top – offering a minimal amount of function but in quite a plasticky, toylike body.

The flashing of the lights can get obnoxious and glaring at times, but not so much as to distract the player from gameplay (most of the the time).

As mentioned before, the Playcon controllers retain the feature of having the snapshot button and home button on separate controllers, which is unfortunate.

It’s important to note Multi:Playcon includes two controllers, to be used separately – so no sticking them on the sides of the Switch for use in tandem. But even though each controller is designed for singular use, they lack many key features of the usual Joy-con.

The Multi:Playcon do not have motion control capability, meaning you won’t get far playing a game like Super Mario Party or 1-2-Switch that rely on that functionality for gameplay.

In addition, the controllers don’t have a depth-tracking sensor, amiibo scanner or HD rumble feature, which seems to be one of the reasons they’ve managed to stay relatively cheap compared to a normal set of Joy-cons (which have all of these features).

Snakebyte does mention on its website that the controllers are able to receive firmware updates, should they ever need one in the future – though the features above are probably above its paygrade.

Initial set up requires you to hold the newly-implemented mode button down. This button is what is first used to sync the controller to the Switch. It’s important to note that a normal wired connection doesn’t connect the controller to the Switch, which can be confusing, especially as the controllers tend to disconnect after around four minutes idle – leading to a frustrating amount of time spent connecting and disconnecting. Don’t reach for that pack of crisps unless you still have one hand on that controller!

As they aren’t able to slide into the Switch either, things get even more annoying when the controller connects as one half of a set of Joy-Cons, requiring you to constantly be in the controller settings, reconnecting them.

The feeling of one of the Multi:Playcon in your hands is an upgrade to the official Nintendo Joy-Con. The controller is slightly bigger and is shaped to fit hands a little better, and makes holding such a small thing slightly more bearable. Gaming sessions last longer, especially if you have bigger hands and have previously had issues with prolonged gaming sessions on an original Joy-Con.

As someone who finds my bones stiffen and knuckles hurt after a few races on Mario Kart using the original single Joy-Con on its side, this controller doesn’t completely get rid of that feeling, but it definitely prolongs those first couple of races without any pain.

Compared to the official Nintendo Joy-Con’s buttons, which lick in a relatively sturdy way, the buttons on the Multi:Playcon controllers feel like a click on the top of a pen. It doesn’t feel robust or of quality at all, though we didn’t have any latency issues or delay with inputs.

Luckily the box comes with a Micro-USB type B cable, which allows for gaming whilst charging – highly helpful considering players will likely have four controllers to keep track of after purchase. However, battery life once fully charged is a mere 10 hours, which isn’t too bad until you compare that to the official Joy-Cons, which boast 20 hours of gameplay.

Affordability is definitely one of the Multi:Playcon controller’s strengths. For about half the price of an average pair of Joy-Cons, you get two working controllers – which is amazing if that’s all you need from them. These controllers will be able to get you through many a match of Super Smash Bros. Ultimate, Mario Kart 8 Deluxe, and other games.

However, if you are searching for a nice-looking, sturdy and sleek set of Joy-Con controllers to play a wider variety of games with – particularly those that make use of motion controls – then you’re better off keeping that smile on your face (and not your controller) by forking out a bit more money for an official set of Joy-Cons.