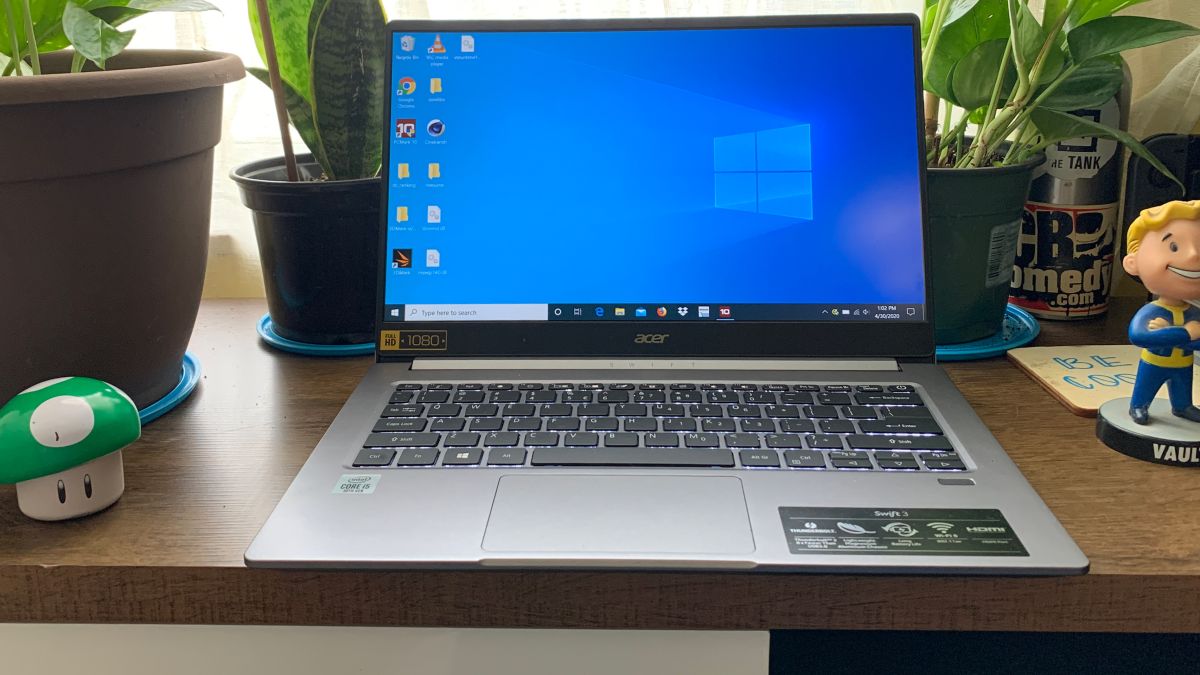 The Acer Swift 3 (2020) certainly exceeds expectations for a budget laptop. Cheaper laptops don’t usually come with big expectations, but the Swift line proves once again that a portable doesn’t have to have a lofty price tag to be competent enough to impress – let alone consistently ranked as among our favorite Ultrabooks.

Not that the Acer Swift 3 (2020) is the epitome of budget laptops. This 2020 update has inherited some of the previous models’ flaws, such as the tinny, downward-facing speakers. However, what it could improve upon without raising the price it has, prioritizing upgrades in  performance and battery life over the older models. The result is a solid device that can hold its own against the likes of the premium Dell XPS 13 in performance while offering better value for a much lower price of entry.

In other words, the Acer Swift 3 (2020) is a fantastic Ultrabook that won’t break the piggy bank. And, it’s a fantastic choice for those whose budget won’t quite stretch that far.

Here is the Acer Swift 3 (2020) configuration sent to TechRadar for review:

Acer continued its minimalist design aesthetic with this year’s Acer Swift 3. Definitely taking a cue from the Apple MacBook Air, the thin, lightweight aluminum chassis should feel familiar to anyone acquainted with earlier Acer Swift 3 models.

The matte-silver finish with polished Acer logo on the back is about as flashy as the laptop gets, and – for some – that’s exactly what they’re looking for. Needless to say, you will have to supply the personality yourself.

The Swift 3 measures in at 12.6 x 8.5 x 0.6 inches and weighs 2.7 pounds, making the device incredibly portable without feeling flimsy. In fact, once our cat got bored with the box and decided to investigate the power cable, she brought the open, running laptop down off a three and a half foot tall desk onto a hardwood floor and bolted, leaving no visible or noticeable damage to the exterior or the internals of the laptop.

While not in any way recommended as a test to run on your own machine, its good to know that there’s a chance that the Acer Swift 3 will survive in the real world.

Speaking of opening it up, the island-style keyboard features responsive, chicklet keys and a Windows Hello-enabled fingerprint scanner. While some might find the keyboard to be a bit cramped, the keys are spaced well for a laptop of its size and the black keys are backlit with soft white LEDs for better visibility.

The trackpad is a good size and responds well during everyday, general use. It also handled itself pretty well in a few PC gaming sessions of Stellaris and Civilization VI, but anything more than that will need a separate mouse or gamepad.

As for ports, Acer loaded up 2020’s Swift 3 with a USB 2.0, a USB 3.0, and a USB-C Thunderbolt 3 port to go along with an HDMI port and headphone/mic jack. There’s no SD card reader or optical drive, but that’s pretty typical of an Ultrabook nowadays.

The Swift 3 features a 14-inch Full HD (1920 x 1080) display that isn’t the crispest on the market, but which is more than enough for most purposes. Several hours of HD streaming movies looked excellent bright enough in all but the most direct sunlight.

The display’s color profile doesn’t stand out necessarily, but it feels like it at least meets the standard of a modern 1080p display. The bezels along the sides and top aren’t the thinnest available right now, but they aren’t the thickest either. The bottom bezel is the largest but it isn’t awful.

The total screen real estate feels appropriate for the overall size of the laptop so it never gets to feeling like things are more cramped than they should be for a 14-inch display. In fact, having two application windows open side-by-side on screen was absolutely doable with minimal horizontal-scroll on Chrome or Microsoft Word.

As for the webcam and built-in mic, both are functional, if modest. Neither are good enough for Twitch streaming, professional YouTube broadcasting, or anything along those lines but they are more than adequate for teleconferencing through Zoom or similar for work purposes.

Here’s how the Acer Swift 3 (2020) performed in our suite of benchmark tests:

After running the Acer Swift 3 through a suite of benchmark tests for its CPU, GPU, and battery, we’re pleased to say that there’s a measurable improvement over last years model.

When it comes to playing video and general use, there’s little to complain about with the Acer Swift 3. Running the notoriously resource-hogging Google Chrome with two dozen tabs open was handled smoothly by the Swift 3, even when one of those tabs was playing through a Udemy course and another had an active Slack channel going.

The system seemed to struggle a bit when trying to run several advertising-heavy tabs, but the same can be said of most systems and — really — that’s more of a societal problem than one limited to a single Acer laptop.

The Acer Swift 3 2020 also handled some light gaming through Steam without any trouble and kept a solid frame rate going through the mid-point of a game of Stellaris, but when that end-game crisis hits and the Intel UHD graphics GPU is trying to track 200+ corvettes and destroyers weaving between a couple of dozen capital ships shooting lasers and fusion torpedos, the fans are going to kick in and you will get a noticeable drop in responsiveness.

Meanwhile, the Swift 3 handled multimedia content creation pretty well for a system with 8GB of RAM. Loading up Photoshop and doing basic photo editing with a dozen or so open files was pretty smooth without any hang-ups.

The biggest improvement we saw over last year’s Acer Swift 3 came in the battery department. Our battery life test, where we loop a 1080p video, ran for 7 hours and 6 minutes, about the same as older models of the Swift 3, but on the PC Mark 10 battery test, the Swift 3 ran for 6 hours and 12 minutes on performance mode with a balanced power profile and made it a full eight hours on a modest battery saver mode and balanced power profile.

As far as thermal performance, the Swift 3 runs comfortably and never gets noticeably warm, even under duress, and the laptop’s fans are effective and whisper-quiet while actively cooling everything.

The hottest part of the laptop is on the bottom rear of the machine by the battery, so the most likely time you’ll notice any heat build-up will be if you’re gaming or video-editing a project while sitting up in bed with the laptop on your legs. Even then, it won’t get uncomfortably “hot” the way others might.

Where the Swift 3 comes up short is its speakers, unfortunately. The audio from the laptop is tinny with almost no low-end, so it all comes off sounding somewhat flat. It’s fine for listening to Spotify or YouTube while working on a project or typing up a report, but on max volume it’s barely audible a room or two away.

And that’s assuming the Swift 3 is sitting on a flat table with no obstruction or table cloth to muffle it. With the downward-facing speakers, sitting the Swift 3 on a bed  significantly muffles the sound. This has been a recurring problem with a lot of laptops over the years and the Acer Swift 3 is no different, but its something that should have been addressed by now.

You don’t want to take out a loan for an Ultrabook
Ultrabooks have always been a bit more of a premium laptop, but the Acer Swift 3 aims at bringing a quality Ultrabook to the wider, more budget-conscious consumer. It’s definitely succeeded in this respect.

You are looking for a highly-portable laptop
The compact dimensions and light weight of the Acer Swift 3 make it one of the most portable laptops out there right now, making it perfect for students running back and forth around campus or for freelance professionals on the go.

You’re looking for a minimalist design in your laptop
While not quite as refined as the MacBook Air, its not out of the question that the Acer Swift 3 could be mistaken for one if you don’t look too closely.

You want something that will game as hard as it works
We always want it all when it comes to our tech, but its important to know what the Acer Swift 3 isn’t. If you’re looking for a laptop for e-sports – this ain’t it, chief.

You’re an audiophile
There’s just no getting around the serviceable speakers. You will hear what you need to hear while actively working on the Swift 3, but if you’re going to spend the day cleaning around the house, this should be your last choice for a stereo unless the alternative is an alarm clock-radio.