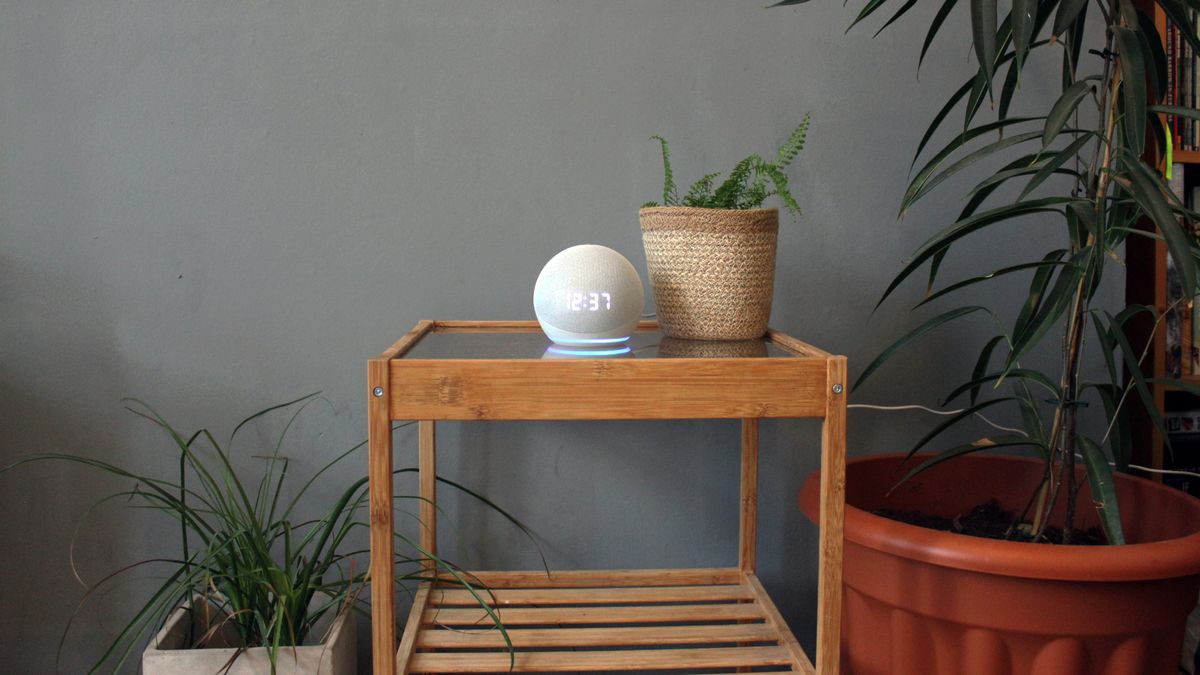 The new Amazon Echo Dot with Clock (2020) was announced alongside a host of other Echo speakers at the company’s hardware event in September, with the latest new Echo Dot coming with a smart LED timepiece.

Like its predecessor, the Echo Dot with Clock can double as a bedside alarm, albeit one that comes with all the smarts of Alexa on board alongside the ability to control your smart home devices (via a separate Zigbee-supporting speaker).

It has undergone a rather radical design overhaul over the previous Echo Dot with Clock, sporting a space age-esque spherical design that’s available in both gray and white color schemes. All the features of the previous Echo Dot with Clock remain, including a 3.5mm AUX-in port, and the blue Alexa light ring – although this is now located at the bottom of the smart speaker rather than the top.

Aside from the design change, there isn’t an awful lot that’s new about the 2020 Echo Dot with Clock. It houses the same 1.6-inch front-firing speakers inside, and despite what its spherical build might imply, there’s no 360-degree soundstage.

As a result, the Echo Dot with Clock (2020) doesn’t offer best-in-class audio, and it really won’t cut it as your main music-listening device. As a desk buddy, however, it works well enough to provide a little background music while you work or study.

It’s a shame then that Amazon hasn’t made greater improvements to the inner workings of its smallest smart speaker, because it’s hard to justify spending the extra money when the previous model can so frequently be found discounted, with prices set to drop even further over Black Friday.

Saying that, if you love the new look of the Echo Dot with Clock, then this could be reason enough to give this smart speaker / alarm clock-hybrid a go.

That price hasn’t changed since the first Echo Dot with Clock, which launched in 2019. Deals for the previous Echo Dot with Clock came fairly quickly after its launch, so you can expect the price of the newer version to be discounted in the coming weeks, particularly over Black Friday and Cyber Monday in November.

You may also be able to save if you buy two units; right now, you can purchase two Echo Dots with Clock and save $20 at checkout, although this deal seems to apply only in the US.

The low price of the Echo Dot with Clock puts it in direct competition with the Google Nest Mini, which cost $49.99 / £49 / AU$79. However, since this speaker is a little older now, it’s usually discounted, and you can expect prices to drop even further over Black Friday.

Amazon’s latest Echo smart speakers all come sporting a new spherical design, which gives them a rather futuristic look that our inner sci-fi nerd can’t help but love. It’s a bold move from the company; after all, the cylindrical build of the previous Echos became ubiquitous with the idea of a smart speaker. However, we’re sure this new look will be just as popular – and with Apple having recently followed suit with the new HomePod mini, it’s in good company.

The new Amazon Echo Dot with Clock is largely the same as the new Echo Dot, with the addition of an LED timepiece to the former allowing the device to double up as a bedside alarm clock or kitchen timer. According to Amazon, the most regularly made request of Amazon’s Alexa-enabled smart speaker in 2019 was “what’s the time?”, so it’s a smart addition.

It features a chic-looking wraparound fabric grille and plastic base, and is available in Glacier White and Twilight Blue.

Around the base of the compact smart speaker you’ll find the blue Alexa light ring, which lights up when you interact with the voice assistant. In addition, as with the 2020 Echo Dot, you’ll find a power port and 3.5mm AUX-in audio port around the back of the device, which means you can hook it up to a more powerful speaker via a cable.

Controls can be found on the top of the speaker and these include an Action button, volume up / down buttons, and a mic on / off button, which can be pressed to turn off the microphone if you have concerns about Alexa eavesdropping on your private conversations.

At 3.5 inches tall, the new Echo Dot with Clock is a little larger than its predecessor, but shares the same small footprint, so it won’t take up too much space on your bedside table. Which brings us to the only feature that distinguishes this speaker from the regular Echo Dot: the display.

The segmented LED display present the time, allowing the Echo Dot with Clock to work as an alarm clock in the bedroom, or a handy timer in the kitchen. That LED display automatically adjusts to the brightness of your room, so it won’t blind you in the darkness, and you can also see it easily in full sunlight. Best of all? You can tap the top of the smart speaker to snooze your alarm, so you don’t have to fumble around in the dark for a button.

Setting up the new Echo Dot with Clock is super-easy: simply download the Alexa app to your smartphone and add a new device. The smart speaker should go into setup mode, which will see the Alexa light ring turn orange. Next, you’ll be prompted to select the Echo Dot in your device’s Wi-Fi settings and connect it to your home’s network.

Once that’s done you can ‘train’ Alexa to recognize your voice so that everyone in your home can get personalized responses from the voice assistant.

Most of what you can do with the Echo Dot with Clock comes courtesy of the smart speaker’s onboard voice assistant, Alexa.

You can ask Alexa to carry out a multitude of tasks, which includes playing music, radio shows, or podcasts from supported streaming services, calling other Echo speakers and mobile phones, reading you the news, creating calendar events, and much more.

We found that the onboard microphones were fairly adept at picking up our voice – but if you’re listening to music, you’ll likely have to speak up a bit.

Aside from the things that Alexa can do, there are also third-party Alexa Skills, which are growing in number every day. They allow you to do things such as order pizza from your favorite restaurants using only your voice, play Alexa-powered board games, and even hear Alexa read out recipes as you cook.

You can also control your compatible smart home devices with Alexa, asking your Echo Dot with Clock to turn off your smart lights, for example, lock your door, or start recording on your security camera.

If you do decide to buy the Echo Dot with Clock as a secondary smart speaker, then you’ll be able to ‘drop in’ on other rooms in your home with Echo speakers (or vice versa) – handy, if you want to use the Echo Show in your kitchen to let the kids know that dinner is ready.

Parents thinking of buying an Echo Dot with Clock for their child’s room will welcome the new Alexa features designed to offer peace of mind. For example, Alexa Voice Profiles for Kids allows Alexa to automatically change its responses to be kid-friendly when it recognizes a child’s voice is instructing the speaker.

We do wish that Amazon had afforded as much attention to the audio quality of the Echo Dot with Clock as it has to its design. As it stands, the speaker’s sound performance remains pretty similar to its predecessor, not least because it’s packing the same 1.6-inch front-firing speaker.

While the Echo Dot with Clock’s new spherical design may have had you thinking that this speaker would offer 360-degree sound, this isn’t the case. Instead, that sonic ‘sweet spot’ can be found only with the speaker directly in front of you.

The volume is pretty good for the speaker’s size, reaching levels that belie the Echo Dot with Clock’s compact frame.

One of the first things you’ll notice about the Echo Dot with Clock is how geared it is towards mid-range frequencies. This means that vocals in particular sound great. However, low and treble frequencies suffer, which doesn’t bode well for bass-heads out there, nor those who crave a high level of detail in their music.

This was evident when listening to Robert by Jockstrap. While vocals sounded clear and well presented, the Echo Dot with Clock doesn’t have the dexterity to handle all the complex rhythmic changes, and the bass definitely fell flat.

In Love My Way by The Psychedelic Furs, presentation of vocals was again excellent, with every rasp of Richard Butler’s gentle voice and that iconic marimba melody clearly audible. There was a little richness missing from the low end of the synth chords, however, and a general lack of power behind the bass frequencies – they’re definitely present, but it was difficult to pick out each note. We found that more tightly controlled bass lines, of the type on Talk Talk’s It’s My Life, were communicated far more adeptly.

In short, the Echo Dot with Clock shouldn’t be your only speaker. As a desk buddy to play a little background music while you work, it’s great. For anything more analytical than that, the Dot with Clock won’t do your music justice.

Should I buy the Amazon Echo Dot with Clock?

You want to add an additional smart speaker to your home
The Echo Dot with Clock works well as a secondary smart speaker, thanks to its compact size and relatively low price.

You want a bedside alarm clock that can play your tunes
The addition of an LED timepiece makes the Echo Dot with Clock an ideal bedside companion, and its sound quality is decent enough to play some background music while you work or study.

You want a smart speaker for your kids
The Echo Dot with Clock comes with some cool Alexa features that make it suitable for children – and the ability to ‘drop in’ using another Echo speaker means it’s handy for checking up on your little ones without schlepping all the way to their room.

You’re building your smart home from scratch
There’s no Zigbee hub on board the Echo Dot with Clock, so you’ll need an additional Echo to hook up to your smart home devices if you want to make them part of an Alexa-controlled network.

You want best-in-class sound
The Echo Dot with Clock is most suited to being a desk buddy to play tunes in the background. For anything more intensive than casual listening, you’ll want to look elsewhere.

You can find the previous Echo Dot with Clock at a discount
Aside from the design, there isn’t a huge difference between this model and its predecessor. As such, if you can find the previous Dot with Clock on sale this Black Friday, we’d recommend opting for the cheaper smart speaker. Equally, if you don’t care about having a clock, you should go for the slightly cheaper Echo Dot (2020).