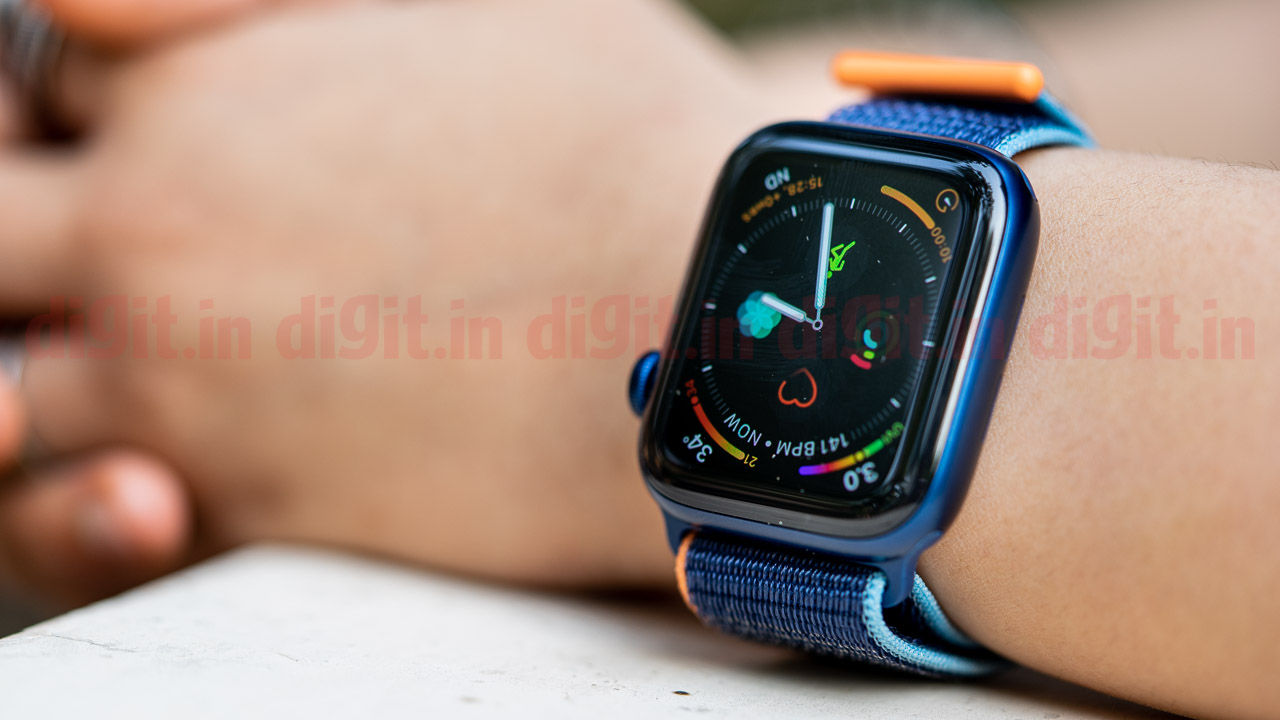 The Apple Watch is arguably the most popular smartwatch in the world. Last year, Apple sold more smartwatches than the entire Swiss watch industry combined, moving 31 million units in a year, according to Strategy Analytics. The Apple Watch, in its sixth iteration, is more than just a smartwatch and far surpasses the offerings of a fitness tracker. This review looks at just how well the watch performs its job. We received a 44mm, cellular version of the Apple Watch for review.

This year, the Apple Watch Series 6 offers a number of new options over and above its usual suite of features. In addition to the ECG, this year’s big addition is the SpO2 sensor, the ability to track more workouts including a host of dance forms, a crazy bright display and more. Being the cellular variant, the Apple Watch Series 6 works with both Airtel and Jio networks, and now, after a few years, with the Vodafone/Idea network too. This year, Apple is also offering two new colours; Product Red and Blue in the aluminium finish. While there are a few new features that come with the Apple Watch Series 6, a host of new capabilities are enabled thanks to WatchOS 7, such as sleep tracking, hand wash detection, app-based complications, and more. Perhaps the most important update to the Apple Watch Series 6 on the hardware front is the fast-charging that’s enabled thanks to S6 System in Package. 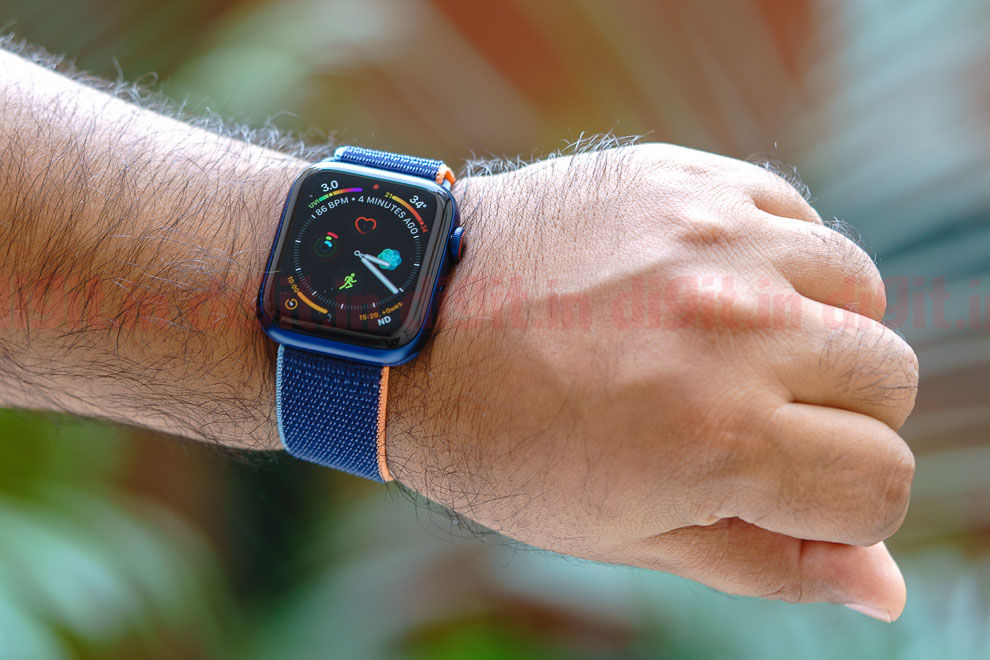 The Apple Watch Series 6 is one of the best devices you can get for yourself, if you’re at all interested in any kind of fitness goals. This applies to couch potatoes who’ve just discovered the drive to shed some weight, or even to seasoned athletes who want to monitor their training regime. One of the most important additions in that regard is the addition of the SpO2 sensor. While everyone obsesses over this piece of hardware for its importance with respect to COVID-19, its use for fitness is equally critical. The Apple Watch Series 6 finally offers the ability to track VO2 Max, a measure of how much oxygen your body can utilise during a workout. Over a period of time, this number should keep increasing, a sign that you’re improving with respect to your fitness. I used the Apple Watch Series 6 to track the number of my bike rides, evening walks and a few short runs, and here’s what I walked away with. 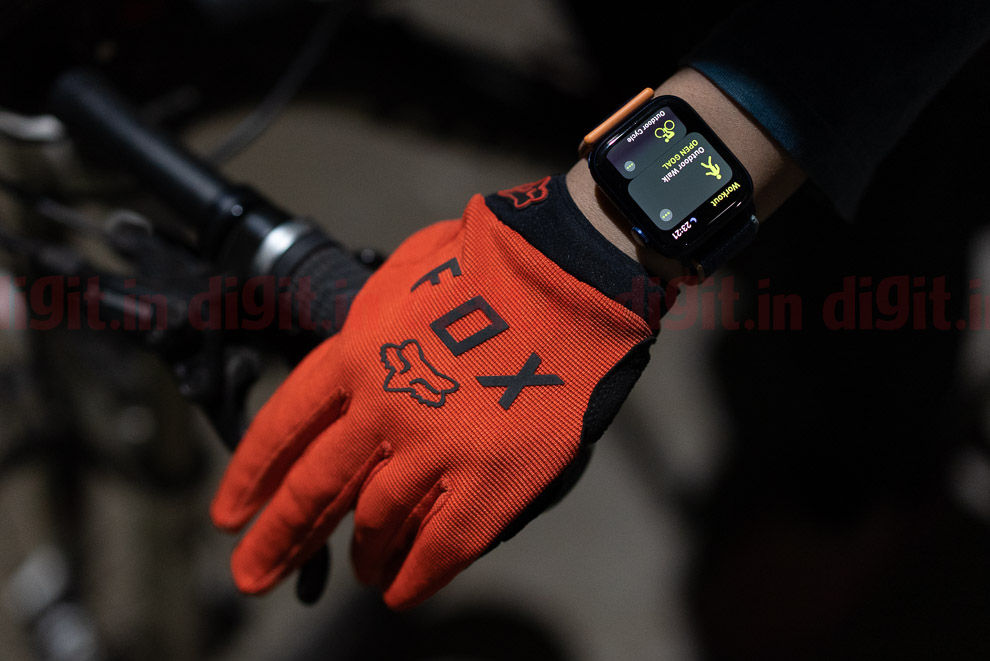 When it came to tracking my bike rides, baseline data was collected using a Garmin Edge 500 bike computer, paired with a Garmin HR chest strap and Garmin’s Speed and Cadence sensors. This combination allows for incredibly accurate tracking of bike speed, GPS, cadence and also heart-rate. Chest-strap based HR monitors are known to be more accurate than the wrist-worn ones. The data reported by the Apple Watch and the Garmin setup was near identical, with very minor variances that would fall well within the margin or error. The average and peak heart-rates reported by both the devices were the same, although the wrist-worn device did lag behind the chest-based HR sensor by a very minuscule margin. This is not so much a problem, but a result of the fact that the chest-based HR monitor is getting its data right from the heart, while the Apple Watch gets its data off the wrist, so a little time-lag is a given. 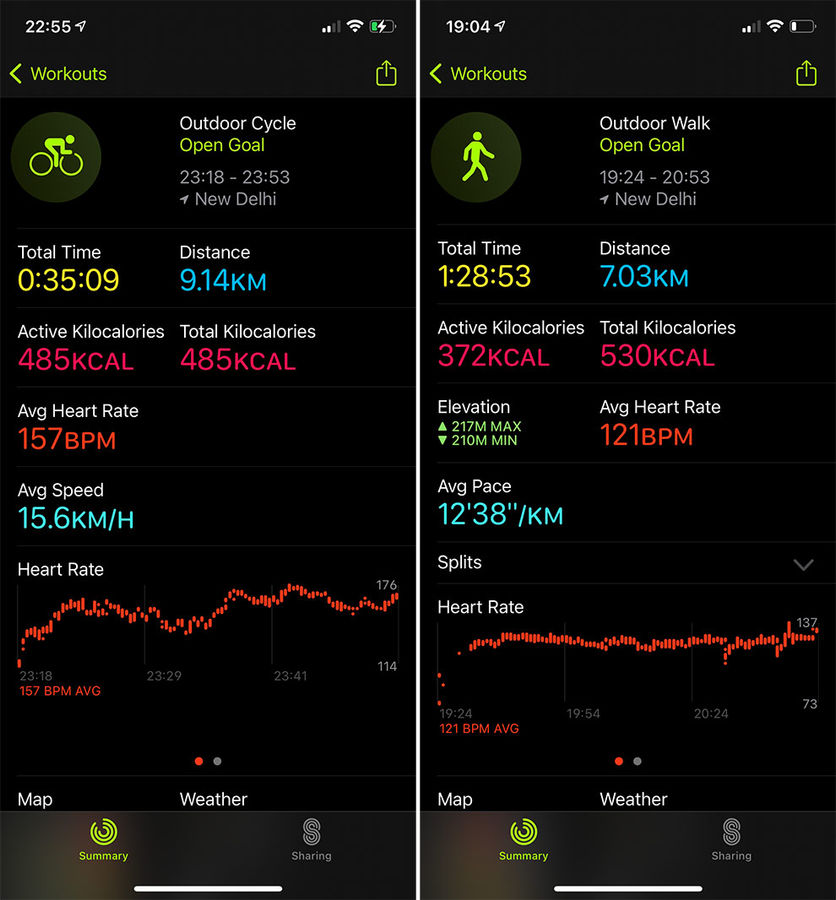 For long walks, the watch once again does an admirable job of tracking the number of steps and also your runs. For those of you who prefer to walk as a means of getting some physical activity in, Apple Watch keeps your regular walking separate from the “dedicated walk activity,” so that your activity rings aren’t populated by duplication.

While most trackers focus on heart rate and activities, the Apple Watch is able to deliver some very interesting metrics that make this a fitness device like no other. This includes metrics Double Support Time (time spent with both feet on the ground while walking), Walking Asymmetry (the percent of time when the step from one foot is faster than the other), Heart Rate Variability (variation in the time interval between heartbeats). All this is just a small part of the data that was generated based on my limited fitness use, which involved hiking, cycling, running and walking. If you use the Apple Watch Series 6 for any of the myriad of workouts it can track, the metrics generated could be different. Needless to say, if you’re a data nerd and like tracking your workouts based on numbers, the Apple Watch Series 6 offers a whole lot of it. 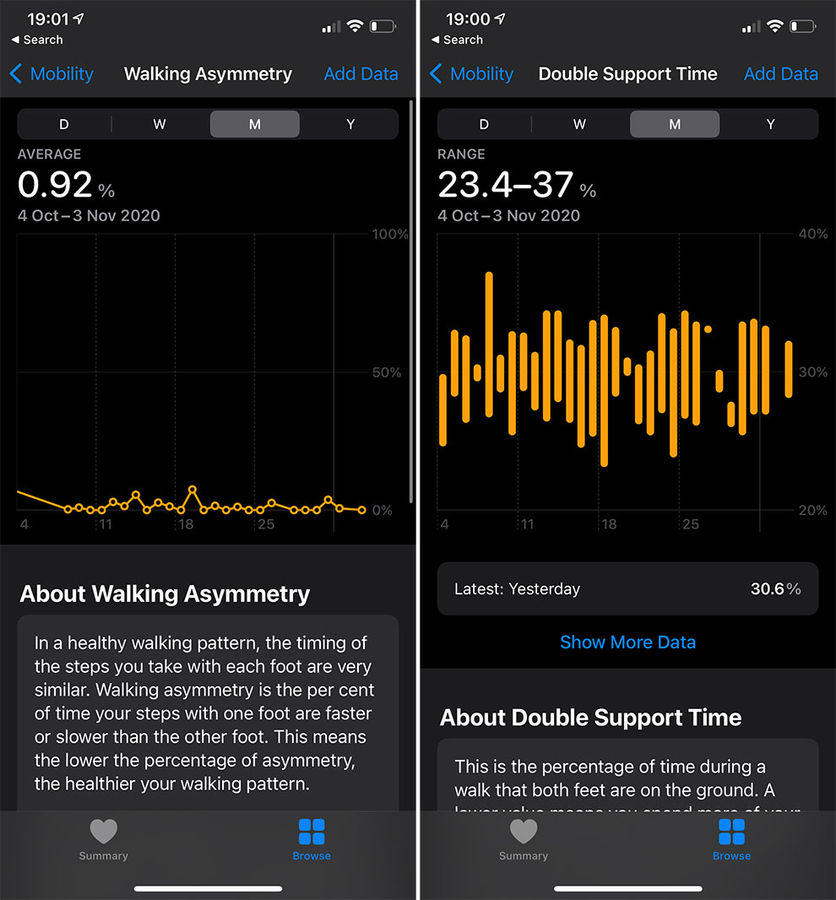 The Apple Watch Series 6, thanks to WatchOS 6, can now track your sleep as well. Surprisingly, the sleep tracking is rather rudimentary and not as detailed as you’d expect from, let’s say, the Samsung Galaxy Watch 3 or even the Garmin Instinct. However, if you were to use third-party apps like Pillow, they will be able to give you a stage-wise breakdown of your sleep. In terms of accuracy, the Apple Watch does manage to get the number of hours right when it comes to sleeping, but it would have been nicer for the watch to deliver deep-sleep-stats natively. Although, I fear that the biggest hurdle in the way of sleep tracking is the battery life, which we will discuss in a later section.

The best way to summarize the Apple Watch Series 6’s smart capabilities is by simply calling it a miniature iPhone on your wrist. With the cellular connectivity, you can legit leave your phone at home during your workouts, and still remain connected to the world. There’s still no WhatsApp for the Apple Watch, but besides that, you can get calls, messages and even emails on your wrist. Most popular fitness apps have an Apple Watch compatible app as well, so you’re not really going to be missing out anything essential. Additionally, the UI of the Apple Watch is perhaps the simplest of all the smartwatches out there. Navigating between apps and screens is done using swipes on the screen and there are no hiccups in the animation. The Raise to Speak feature makes Siri genuinely super helpful, especially if you have to shoot off an urgent text or email while your hands are pre-occupied, let’s say, while driving. The microphone built into the watch works decently well to take calls, but only if you lift the watch all the way to your face.

All the data collected by your Apple Watch Series 6 goes to the Health app, where its collated and organised into neat little silos. Going through the health app can be a little cumbersome, especially if you’re looking for metrics on a particular workout. For that, you need to head over to the Fitness App, which houses all the data specifically related to your workouts. Sadly, you get only the basic stuff. For my bike rides, I would have liked to see the VO2-Max stats, but sadly, the Fitness app only shows the pace, distance, heart rate and recovery heart-rate, but does not list out important metrics like peak heart-rate or the VO2 Max, which other fitness devices like Garmin’s do. This is a legit bummer for someone who is really trying to build upon their fitness and would like access to the metric. Hopefully, Apple could provide the numbers in a future update, because their devices clearly pick up the data corresponding to it. 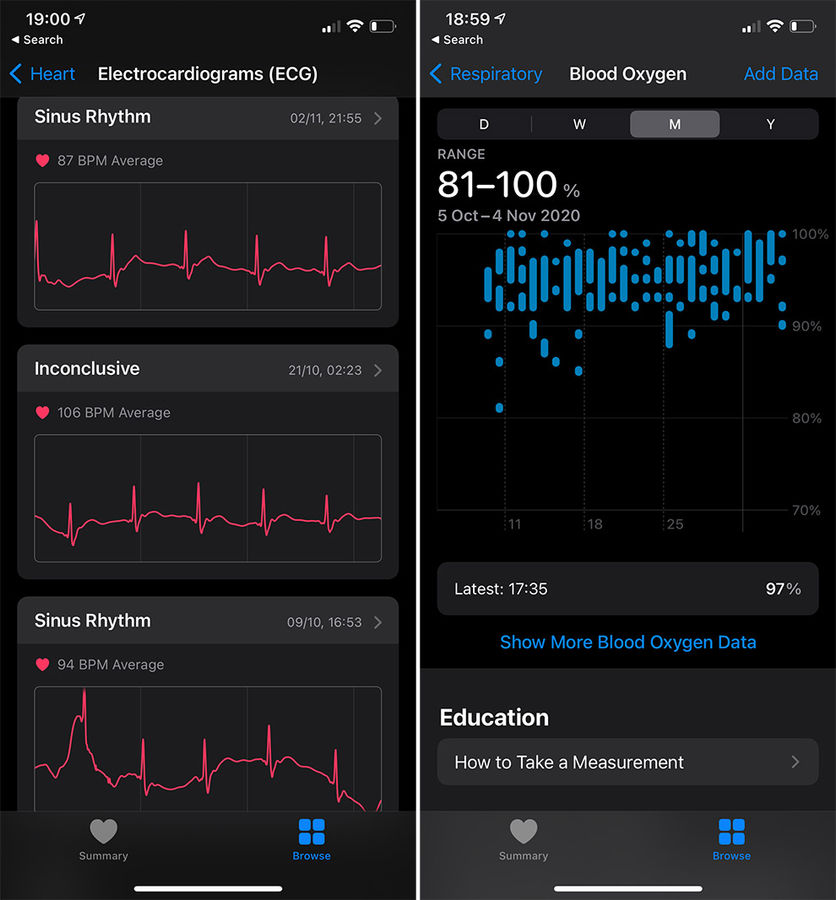 Apple has managed to squeeze a lot of sensors and features into the Apple Watch. All-day heart-rate tracking with intermittent SpO2 readings, an always-on display that’s incredibly bright and constantly being connected over Bluetooth to the iPhone can take a toll on the battery. In this regard, Apple has still managed to claim 18 hours of battery life, the same as the Series 5. On one hand, you’re happy about getting all these new features without a hit on battery life, but then again, you realise that Apple hasn’t managed to increase battery life. I was able to run the watch for about 18 hours easy before having to put it on charge. This, while annoying, has one serious drawback. You’re going to be missing health data from every day, for the duration that the watch is on charge. This could have an impact on the calculation of your “resting” metrics such as resting heart-rate, resting calorie burn etc. If you don’t care for those, it’s still a gap in your daily health data, and it’s not something that I personally like. The silver lining here is that instead of taking hours to charge back up, thanks to the new S6 SiP, the Apple Watch Series 6 goes from Zero to 100 in under 90 minutes.

Should you buy the Apple Watch Series 6

Anyone part of the Apple ecosystem looking for a new smartwatch needs to strongly consider the Apple Watch Series 6. First-time buyers or those looking to swap out their Series 4 (or older) can definitely consider the Series 6 as a very viable option. Those with the Series 5 could do with waiting for the next Apple Watch. If you’re someone who takes their fitness metrics very seriously, the Apple Watch does offer one of the best tracking capabilities across a vast range of metrics, with the downside being the health app, which refuses to divulge granular data. If you go with the LTE edition, then you have the added advantage of being untethered from your phone. The Apple Watch Series 6 continues to offer one of the best smartwatch experiences in the industry and honestly, there’s very little reason to not recommend it. Doesn’t hurt that it is the best looking smartwatch in the business as well.