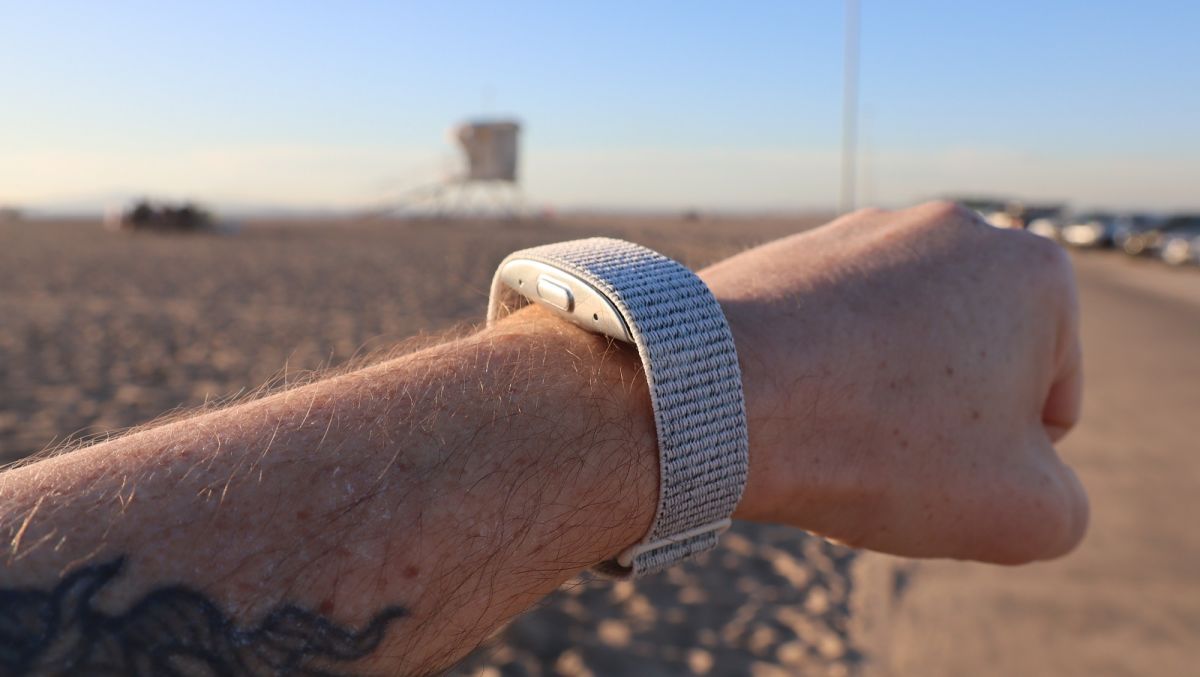 At the end of 2020, Amazon quietly released its fitness wearable, the Amazon Halo – but only in the US. Without a screen, it’s a pure activity tracker, but the partnered app has a few cool features that you won’t find on any other fitness device.

Surprisingly, these features don’t include the integration you’d expect with an Amazon device – there’s no Alexa assistance, no voice control, and no integration of your connected Amazon account.

Instead, Halo’s distinguishing features include monitoring your voice for signs of stress or strain as you talk throughout the day, and using the paired phone app to take photos of your body to calculate your body fat percentage. If you’re already thinking about privacy concerns at this point, you’ll be reassured to know that both features are opt-in (better still, Amazon explicitly laid out what data is and isn’t kept on the device).

If you just want the basics, the Halo can track your fitness activity and sleep, and you can view your stats on the connected app. There’s an optional subscription service available through the app (you get six months free with your Halo purchase, and it’s $4 a month thereafter) which provides workout classes as well as Labs, a patchwork collection of wellness and nutrition mini-courses that aim to improve your fitness and sleep scores (Halo’s two key health metrics – more on those below).

What’s most concerning is how many features you don’t get without a subscription: a limited selection of Labs and neither the Body-scanning or Tone features, but also none of the advanced fitness or sleep scores, the latter of which seem simple enough to not require a subscription. The Halo isn’t useless without subscribing, as it can still count steps, heart rate, calories, and time asleep/awake, per this Amazon FAQ page. Six months free with purchase is nice to try out the service…unless you bought or were given the Halo secondhand.

The Halo is a screen-less tracker – it’s basically an oblong pod on your wrist with a single physical button, an LED light, and a microphone, with a fabric wrist strap wrapped over it. Given that there’s no display, the button is only used for muting your mic for privacy while using the optional Tone feature, which periodically listens to your vocal intensity and nudges you when it detects you’re in a mood.

The Halo costs $99 (around £75 / AU$130) and is only available in the US right now, although Amazon says it will be available in other regions later. It comes in three color combinations, split between the fabric band and paired sensor capsule: black/onyx, a pinkish ‘blush’/rose gold, and light gray ‘winter’/silver.

The Halo is comfortable enough to wear, though it’s a bit wide and can rub up against the wrist joint, and can require a little adjustment before it sits right. After that, you’re likely to forget it’s there, given that you won’t be looking at its screen for insights – instead, you’ll have to pull out your phone and switch to the Halo app for those.

Rather than a shortcoming, this is intended to be key to the Halo’s appeal. Like other basic trackers the Halo lacks vibration, so it can’t be used for reminders, notifications, or wake-up alarms. It’s sort of pure that way.

The Halo: passive, not pushy

The Halo has the least-active engagement loop we’ve seen since the Jawbone days, and it certainly demands less attention than modern fitness trackers and smartwatches – which means it takes a little personal adjustment if you’re one of those people who habitually peeks at the device on your wrist for reassurance that you are, indeed, being a fit person today.

That kind of passivity extends to the fitness tracked, too: unlike most fitness trackers, Halo sets weekly goals, not daily ones, by way of a total score (set to 150 points by default, which equals 150 minutes of earnest exercise).

This makes it easier for folks to let themselves off the hook and take a day off workouts here and there, as Amazon’s logic goes. The app won’t nudge you unless you’ve been sitting down for longer than eight hours, and even then there’s no vibrating motor on the Halo to bug you into action – you’ll just have points docked from your weekly score (one point per sedentary hour).

Likewise, the sleep tracking has a score out of 100, with a goal of hitting 85 or better for quality rest. A daily graph shows time spent moving through sleep stages overnight, and you’ll get recommendations for improving your sleep if your scores are lower.

So, in theory, you could just let the Halo do its thing on your wrist and check in here and there until it runs out of juice – the battery lasts around seven days. If you turn on the constantly-listening Tone feature, however, that battery life is reduced to two days.

While we haven’t spent much time with either feature – we’ll dive deeper in our full review – both Body and Tone are fascinating, although we’ll have to wait and see if their utility justifies their inclusion.

Body prompts the user to take four camera shots of themselves in skintight clothing (front, back, and both sides) using their phone’s camera, and combines those photos with algorithmic analysis to calculate body fat percentage – according to Amazon’s research, body fat is a better metric of health than body mass index (BMI). While Amazon processes this data on the cloud, the updated results are immediately sent back to the device and deleted thereafter.

Once calculated, the user is presented with a 3D image of their body in the app, with a slider at the bottom set to their current body fat percentage, which they can slide back and forth to see a visualization of their body’s shape changing if the percentage rises or drops. It is, from this reviewer’s experience, a rude wake-up call – but it’s a more accurate visualization of how the body can change than is usually available outside the doctor’s office (Amazon states it’s twice as accurate as smart scale measurements).

Nearly every modern smartphone has cameras able to take Body images, though Amazon is working through which much older phones have limited functionality (the LG K20 Plus, LG X Power 3, and LG Stylo 3, for instance, show a percentage but no body fat-estimating image). Bizarrely, the Asus ROG II cameras don’t work either, Amazon told us, but the Halo team plans to continue improving the Body feature, suggesting more compatibility will come.

Tone is an odder feature for Amazon to include: to our knowledge, ‘how you sound to others’ has never been included as a health metric in other trackers, let alone a factor we’ve paid attention to for physical wellbeing. Thus, Amazon pitches this as something to help your communication and relationships, and tracks your voice tone throughout the day for vocal patterns that correspond to positivity, negativity and energy.

You can use Tone’s data tracking passively (match it against your Sleep and Activity scores, then draw conclusions), or actively (check how your prepared speech might sound). Both could be helpful, and when we’ve had more time to test the feature we’ll weigh in on how these results make us consider or alter our habits – although it could be a solution (Amazon’s microphone and vocal analytics expertise) in search of a problem that, ultimately, burns more battery than it’s worth.

The Labs: you are the subject

The Labs, as pitched, are odd ducks – but as an attempt to change your habits, they’re not a bad approach, so long as you understand that, workouts aside, they’re sponsored by brands  that get your anonymized participation (but not health) data.

Tap the Labs icon at the bottom of the app and you’ll have a slew of options thrown your way. The first is a choice between Programs and Workouts; the latter is self-explanatory, but the former is where all the experimental fun begins. There are bubbled options for what issue you’re trying to address (like Activity, Sleep, Nutrition, and Mindfulness), though you can tap ‘Filters’ to show more based on interest areas, brands, duration, and more.

From what we can tell, most of these follow simple suggestions: “Try this thing during your day/while eating/before bed, and track any changes to sleep/activity score”, which is fine, given how little the Halo can actually track. Again, we’ll reserve judgment on how useful these are in terms of getting us to change our habits, and whether the suggestions are helpful after all.

Labs might be the most unique feature of the Amazon Halo, but it’s far from the most essential: the device operates just fine as a fitness tracker, and there’s more than enough to play around with and pay attention to besides the things that require a Halo service subscription. This may all change, too: Amazon reps let us know that this is really the first stages of both this wearable and the paired app.

For now, the Amazon Halo seems like a more affordable fitness-tracking solution for folks who don’t mind getting all their info from an app rather than from a wearable’s screen – with a few inessential yet intriguing extras to sweeten the pot.