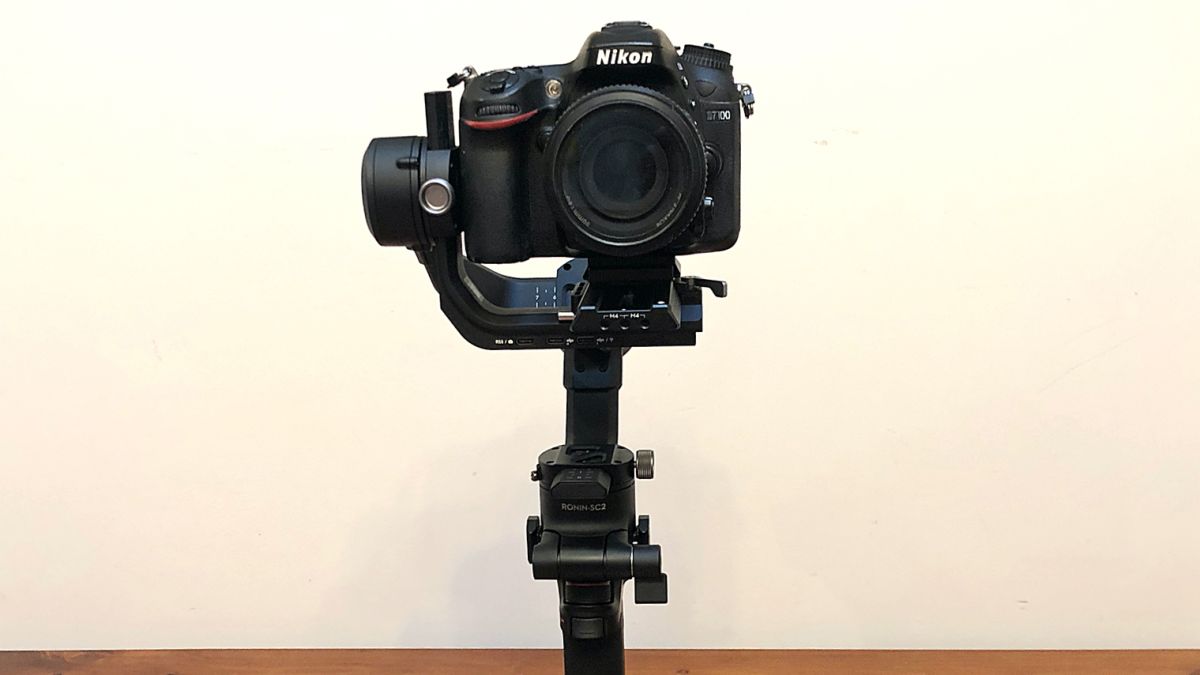 You can leave your dolly at the door: the arrival of the DJI RSC 2 means Hollywood-worthy tracking shots are more accessible than ever. Like the DJI Ronin-SC before it, the DJI RSC 2 is a three-axis camera gimbal which helps vloggers and videographers shoot super steady footage single-handedly.

But while the RSC 2 retains the same core skills as the Ronin-SC – including advanced smartphone connectivity – it also promises a range of upgrades, including a bigger battery, an OLED info screen and a new folding design for enhanced portability. It’s stronger, too, which means it can support mid-range DSLR cameras, as well as compact and mirrorless models.

So how does the RSC 2 perform in practice? We got hands-on with the gimbal before its launch and our first impressions indicate it’s every bit as good as the improved specs suggest. If you’re looking for a versatile yet backpack-friendly solution to smart, stabilized footage, this could well be the tool for you.

The DJI RSC 2 will be available to order from October 31. Released alongside the more powerful DJI RS 2, the base variant of the RSC 2 will cost $499 / £389 (approximately AU$700). That’s $60 more than the Ronin-SC cost at launch in 2018, but its pricing still puts the RSC 2 broadly in line with other mirrorless gimbals in the market.

An RSC 2 Pro Combo bundle will also be available. This pack adds all of the accessories you’ll need to take your gimbal game to the next level, including a smartphone holder, Focus Motor, RavenEye Image Transmitter, carry case and more. Pricing for the kit is confirmed at $739 / £569 (approximately AU$1000).

You’ll also be able to pick up several new accessories for the RSC 2 in the near future, including a Twist Grip Dual Handle and 3D Focus System, though pricing for those is yet to be confirmed.

Chief among them is the new folding neck design. Where the Ronin-SC’s grip and gimbal were two separate parts, the RSC 2 is a single unit which hinges at the neck. This might sound like a simple change, but it’s a more convenient solution that also makes the RSC 2 more portable. You’re still likely to transport it in the carry case, but the folded gimbal occupies just the same area as a sheet of A5 paper. Which is pretty compact.

As the hinge is used for the new ‘Sling’ shooting mode, it’s also reassuringly sturdy, firmly locking in place with a lever. And that goes for the rest of the RSC 2: from our hands-on time with it, the whole gimbal feels well-built, with materials such as aluminum contributing to a solid, premium finish.

At 1.1kg, the DJI RSC 2 is essentially the same weight as the Ronin-SC, yet the new model can support cameras which hit the scales at up to 3kg. Backed up by stronger axis motors, the RSC 2 is therefore compatible with a whole range of DSLR cameras. But it’s worth noting that, in practice, with a 2.5kg camera and lens attached, you’ll need strong wrists to use the RSC 2 single-handedly for extended periods.

Other physical changes include a trio of USB-C communications ports beneath the camera mounting plate, as well as redesigned axis knobs which – along with the existing axis locks – make balancing the gimbal that much easier. You’ll also find a re-shaped trigger on the front, below a new focus wheel, while the joystick, mode and camera control button have all been repositioned to make space for a 1-inch OLED info display.

Based on our hands-on time with the DJI RSC 2, it’s both effective and accessible as a standalone gimbal. Once you’ve balanced the axes and mounted your camera, controlling pan and tilt with the joystick feels perfectly fluid and intuitive. The front focus wheel and trigger are equally well-placed for your index finger, while the back buttons and scroll wheel sit within easy reach of your thumb.

You’re now even more likely to find a physical setup that suits your creative requirements: in addition to the upright, underslung and flashlight options, the new ‘Sling’ mode uses the hinged neck to mimic a handheld rig with the camera slung forward.

The result of this additional versatility is, unsurprisingly, that the RSC 2 is even more capable when it comes to delivering a stable platform for your camera. According to DJI, there’s a newly optimized Titan algorithm which “smooths out the fine details” – and that certainly appears to bear out in practice. In our limited hands-on time, we were able to capture shake-free handheld footage, complimented by buttery smooth panning and tilting.

And we could do so for longer, courtesy of the beefed up battery. On paper, the DJI RSC 2 can go for a full 12 hours on a single charge, one longer than the Ronin-SC. That will naturally vary depending on how hard the axis motors are working to smooth and track motion, but the bigger boon is USB-C quick charging, which adds approximately two hours of battery life in just 15 minutes – ideal if you need some extra juice to finish a shoot.

As for the new OLED screen, it’s a simple but transformative addition. Where the Ronin-SC’s trio of LED indicators required you to remember how you’d programmed each mode, the RSC 2 uses its 1-inch OLED to display which mode you’re in, what that mode does, the panning speed and the available battery life. The readout strikes an ideal balance, serving up just enough useful info to add clarity, without cluttering the simple interface. And it doesn’t try to be too smart: if you want to adjust modes or settings, you’ll need to dive into the Ronin app.

As with the Ronin-SC, the app is a pretty comprehensive partner to the RSC 2. First and foremost, it allows you to configure the function of the three available modes on the RSC 2, enabling or disabling individual axis motors and customizing parameters such as follow speed.

It’s also where you can access the various creative presets, including time-lapse and panorama. With the RSC 2 connected to a compatible camera, the gimbal will control both the panning and the shutter release, resulting in effortless yet remarkable results. Fans of these presets will also welcome news that a new one is due shortly after launch: Time Tunnel will see the gimbal perform a 360-degree roll while capturing a hyper lapse.

Besides the Virtual Joystick and the option to control the DJI RSC 2 with a PS4 or Xbox controller, the app is also where you’ll find the returning Force Mobile mode – and it’s just as effective as before. Simply put, Force Mobile sees the RSC 2 copying the orientation of your wirelessly connected smartphone, panning and tilting to match your handset. It’s seamless and makes remote control feel more than a little bit magic.

DJI has also promised an “updated ActiveTrack”. On the Ronin-SC, ActiveTrack 3.0 used deep learning algorithms to automatically track subjects with the camera of your smartphone. It was a smart trick, deploying tech perfected on DJI’s drones to accurately pair digital tracking with the mechanical movements of the gimbal. According to DJI, ActiveTrack 3.0 will only be available on the RSC 2 when the new RavenEye Image Transmission System is connected. This additional module should allow you to stream a 1080/30p low-latency feed to your phone from up to 100m away, but it wasn’t available to test for our hands-on review.

Even in its absence, RavenEye highlights an important point about the RSC 2: many of its best features require sold-separately accessories. The base model does come bundled with the folding tripod base, but you’ll need a Focus Motor to unlock the functionality of the front focus/zoom wheel, while the Phone Holder is required to side-mount your smartphone as a settings screen or use it as a second monitor. For this reason, the more expensive but comprehensive Pro Combo will probably be the most appealing option for videographers.

It’s also worth checking that your camera has a compatible USB port. The RSC 2 is shipped with a handful of control cables, with connections including Micro and Mini USB, as well as USB-C. The degree of camera control supported will vary from model to model, but if your camera doesn’t have a compatible port at all – such as the UC-E6 port found on older Nikon cameras – it simply won’t be able to connect to the RSC 2.

After a full day of playing with the DJI RSC 2, it’s clear that the gimbal builds on the Ronin-SC in all the right ways. Steady shots and smooth controls were pretty much a given, but it’s the subtle design changes that make the RSC 2 a much improved stabilizing option for vloggers and videographers.

The folding neck makes the RSC2 more portable and unlocks novel shooting possibilities, while the increased payload means it now works with a range of DSLR cameras. Add a new OLED info display, a redesigned control layout – including a front focus wheel at finger’s reach – and a sturdy, premium finish, and the RSC 2 shapes up as an appealing package.

We’ll need more time with the DJI RSC 2 to accurately test how its 12-hour battery life stacks up in practice. Feedback on the new Time Tunnel preset will likewise have to wait until the full app release, while testing the updated ActiveTrack functionality won’t be possible until we’ve got our hands on a RavenEye module. And it’s worth remembering that the Pro Combo will be key to unlocking the gimbal’s full potential. Still, from what we’ve seen so far, the DJI RSC 2 looks like it has plenty to offer.