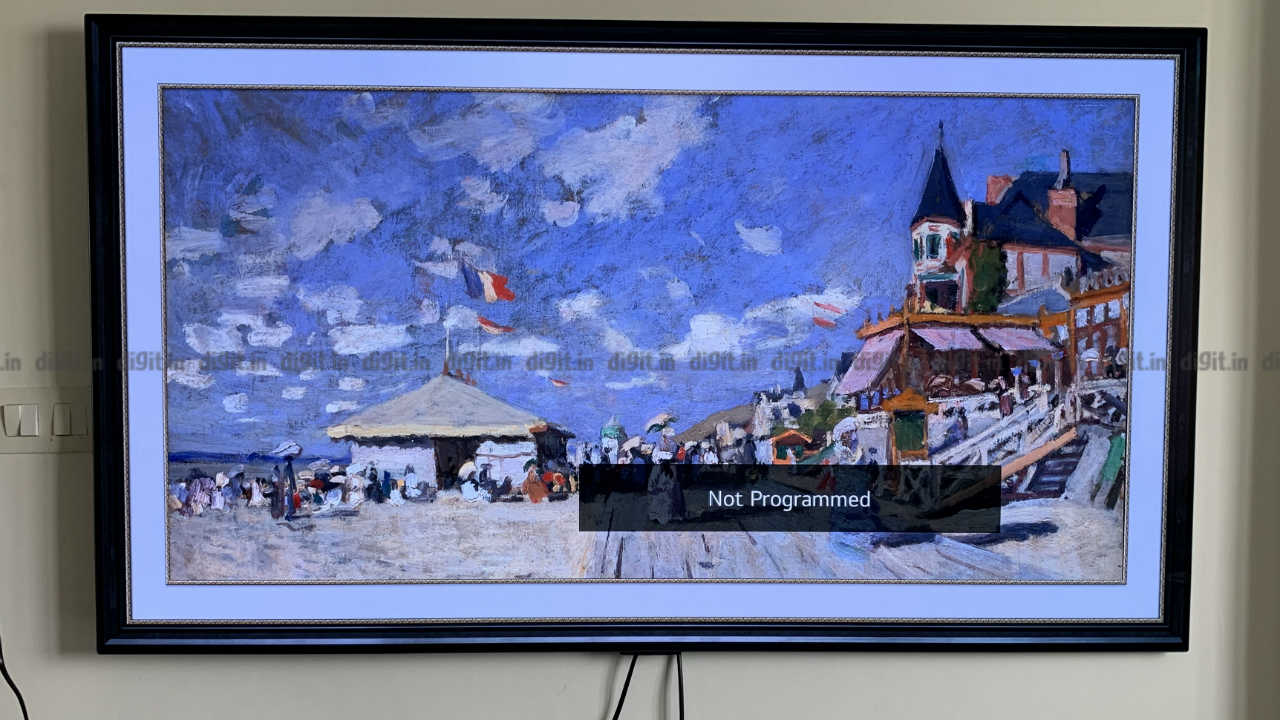 LG has been at the forefront of OLED TVs. In the past few years, not only has the brand launched multiple OLED TVs but also been helming new TV technologies like HDMI 2.1 and even brought support for G-SYNC and FreeSync to their TVs.

LG’s OLEDs have had a sleek design bringing thin OLED panels, angular tabletop stands and a slight bulge at the back to house the components and connectivity options. However, this year LG has the LG GX. The TV is super thin, the thinnest we’ve seen and when mounted on a wall, it sticks to the wall and looks like a piece of art more than a TV. Is this the best premium TV for your living room?

Specs at a glance

LG’s OLED TVs have some new tricks up their sleeves in 2020. The TVs are powered by the new Alpha 9 Gen 3 chips which LG showed off at CES 2020 and also come with a Filmmaker Mode that changes the settings of the content to represent the picture the way it was intended by the filmmaker. The TV also supports Dolby Vision and Dolby Atmos and has LG AI picture engine we saw on the 2019 OLEDs as well. Needless to say, LG has done the work to ensure that their 2020 OLEDs stand out when compared to the outgoing models. 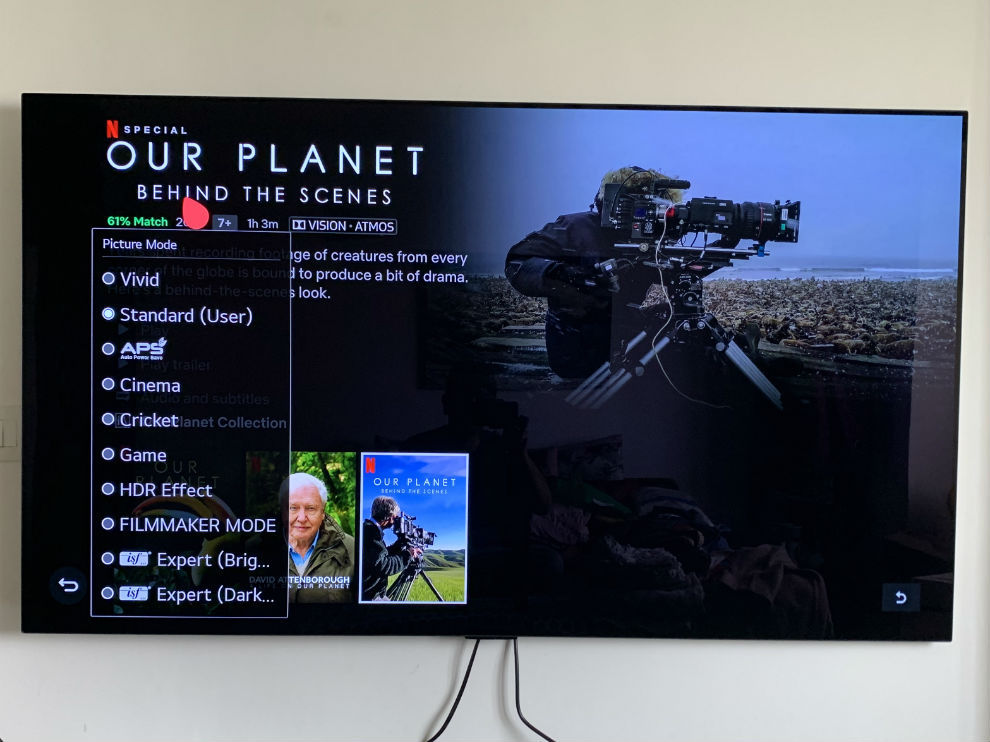 LG OLED TVs have generally done well in our 4K HDR tests and the same holds true for the GX as well. Since this is an OLED TV, the peak brightness isn’t as much as some LED TVs we’ve seen but it gets bright enough to enjoy HDR content.

Since this is an OLED TV, we can expect it to have a great contrast ratio when both bright and dark sequences occupy space on the screen. The finale of Wonder Woman is a great example of this. We have the protagonist and antagonist battling out at night with lightning and fire illuminating parts of the screen. Watch this movie in a pitch-dark room and this TV and you will get a true cinematic experience. When lightning illuminates a part of the screen, the passive illumination of trees in the background is easily visible without any blooming. 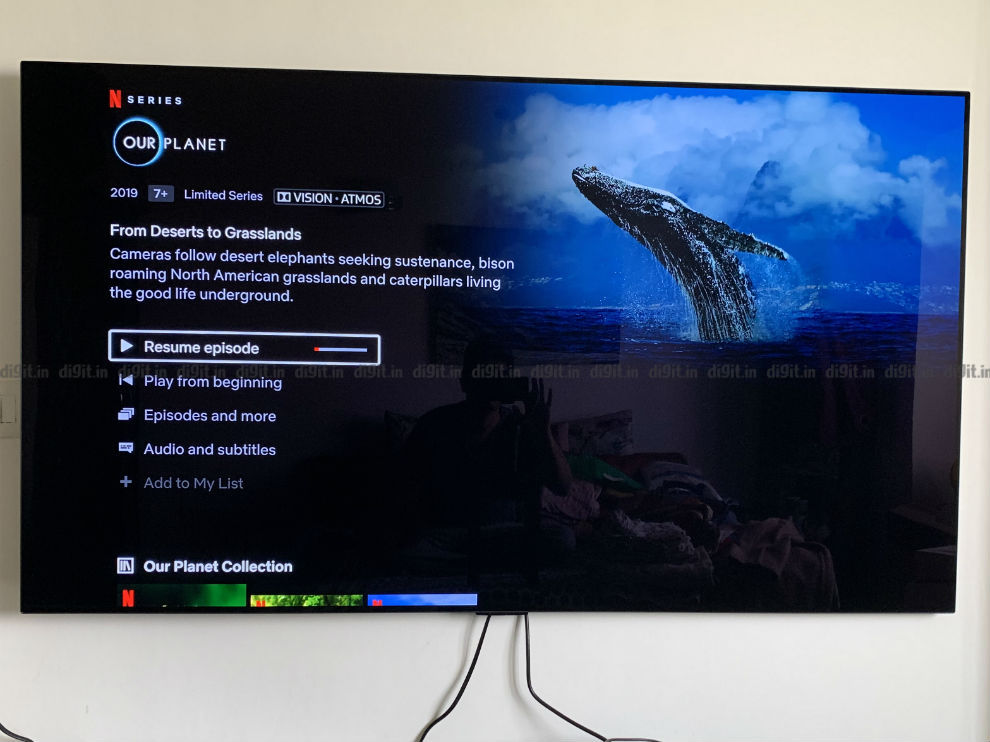 On streaming services like Netflix and Prime Video, we have shows like Our Planet, Grand Tour and more flexing their HDR prowess and it is a treat consuming such content on this TV. In our Planet S1E1, the day-night transition feels natural and the starry sky looks sublime.

Just like every other OLED we’ve seen this year and last year, the only downside is consuming content in the day time or a very bright room as the panel can get reflective. This isn’t an issue with this TV, but with all OLEDs in general.

This is where things get interesting. We watched a lot of content available in FHD and SDR on this TV, and we start to play with some picture presets the TV has to offer. In a standard mode sometimes, the picture was a little bleak and in the Vivid mode a little too vivid. This isn’t bad, just that you need to tinker with the settings a bit to get the colours just right. Even movies like Spider-Man: Homecoming looks vibrant. But a movie like Mission: Impossible Rogue Nation had more muted colours than I’d like and switching to vivid made things better. 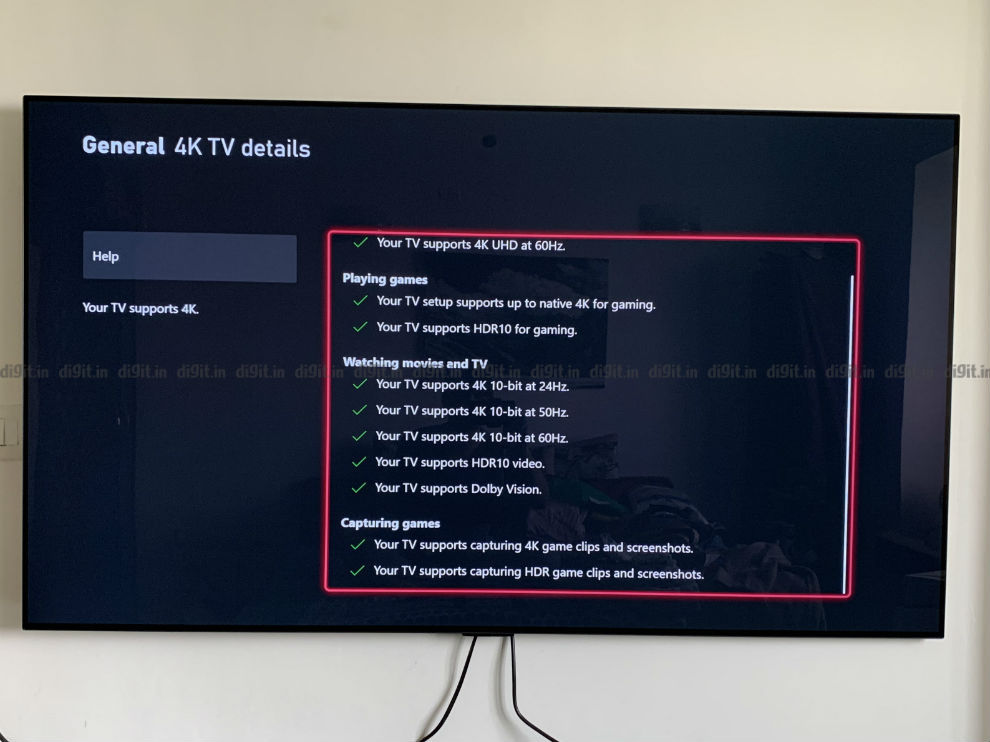 The LG GX has all four HDMI ports as HDMI 2.1 which means that when you connect it to the Xbox Series X, PS5 or the new NVIDIA 30 series GPUs you will be able to take advantage of features like ALLM and VRR along with gaming at 120fps. But for this test, we have stuck to the PS4 Pro and Xbox One X. 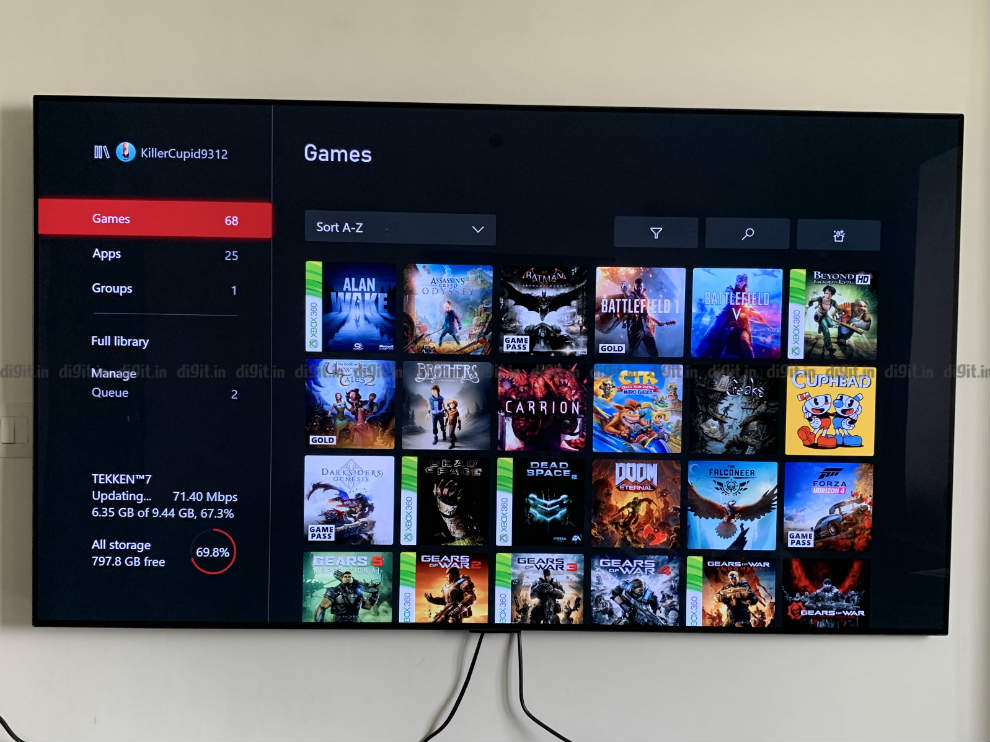 On the PS4 Pro, we played Marvel’s Spider-Man: Miles Morales (review) and Dirt 5, both of which are slated to get a free next-gen upgrade. The games looked vivid and bright in HDR and keeping the games in the quality mode (for Dirt 5) we got the best visual experience. The cars in the game looked detailed and the environments lush. Even in Spider-Man, the game looked vibrant and beautiful in HDR.

Gears 5 (review) on the Xbox One X has a very vibrant colour pallet and the “instant game response mode” kicks in when the console is detected. Assassin’s Creed Odyssey is one game that’s beautifully mastered in HDR and it shows, especially when cycling through the day-night cycle in the game. Needless to say, if gaming on a large screen is a priority for you, nothing beats the LG GX. 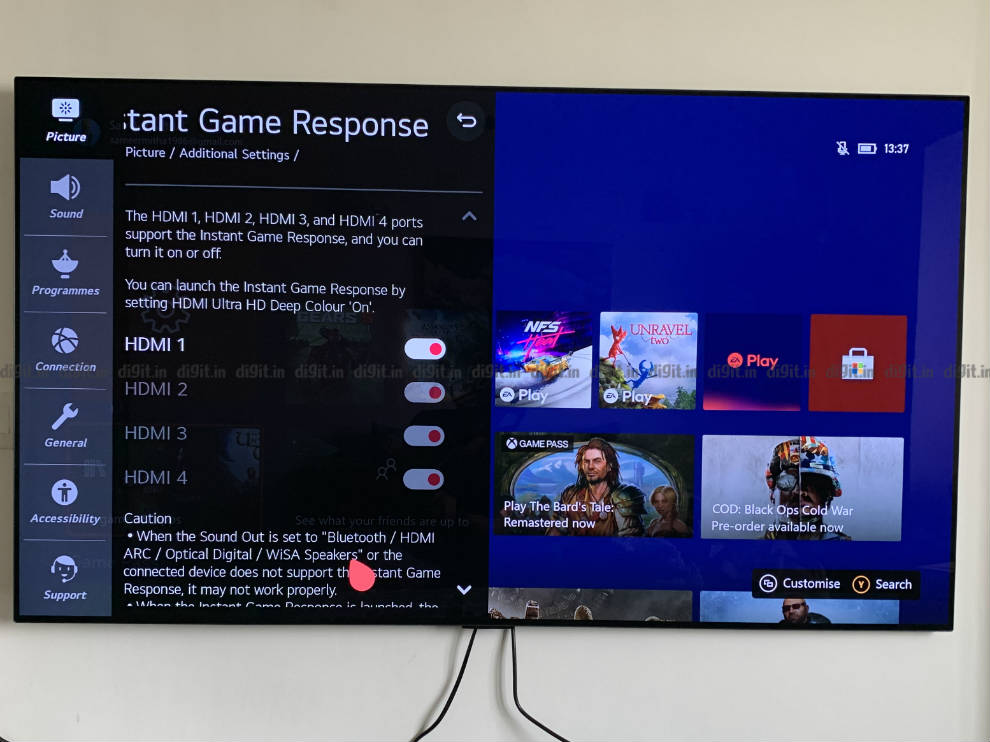 The LG GX has a total of 60W of sound output and has a 4.2 channel setup. The TV can get really loud, that’s for sure. Ready Player One is one of our benchmarks for audio performance and the race at the 13-minute mark has cars whizzing past the screen. While the TV can get loud during this sequence and retains the details we expect from a TV speaker, what it lacks is channel separation. Unlike the Sony A8H (review), which gave us a clear movement from left to right during the sequence, with the LG the sound was coming straight from the TV. The TV speakers also have bass but lack the thump one expects. Considering how slim this TV is, the audio from the TV is loud and clear, but lack the separation needed for an immersive experience. 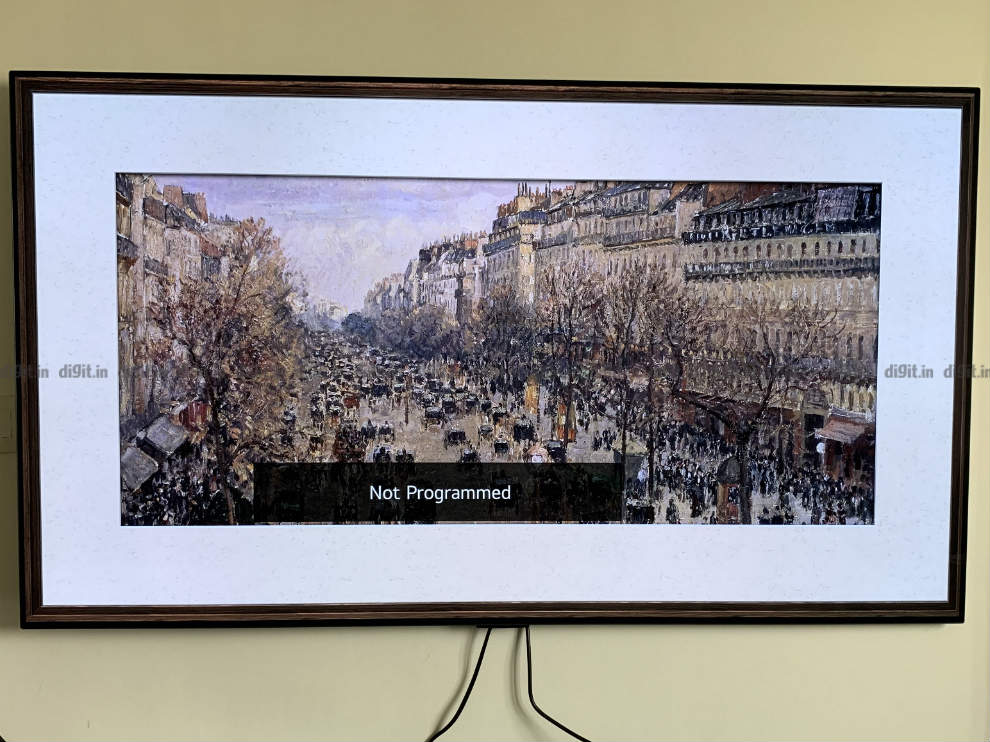 The LG GX runs on the company’s WebOS platform and it is my favourite TV UI out there simply because of the ease of navigation and the way things are laid out. Some of the settings have changed for the better, and we have a new loading circle and icon for the LG App Store on the TV. These are small aesthetic changes, but nice. The main Settings menu has also seen a small shuffle in where some of the settings are kept and while we won’t get into which setting has gone where know that navigation is a lot easier in the settings than the C9 (review) we reviewed last year. 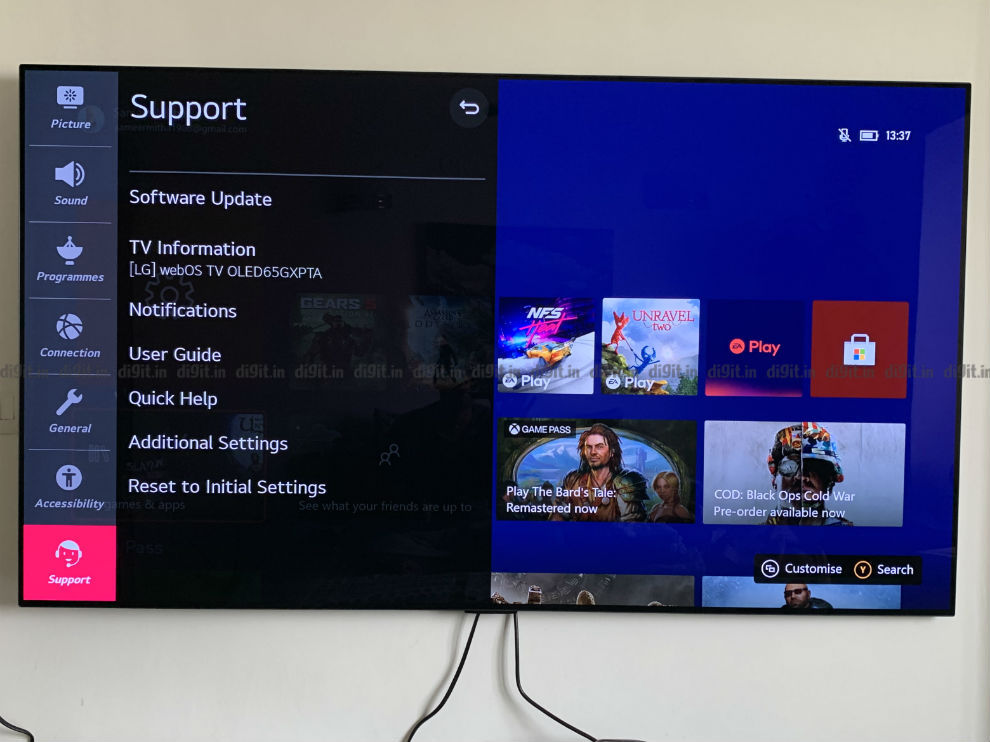 The highlight of the LG UI is its magic remote which lets you control the cursor like a mouse on the TV. From typing passwords to navigating apps and settings and even changing inputs, it all feels like second nature once you get used to it. Going back to navigating with a remotes D-pad just feels sad after this experience. 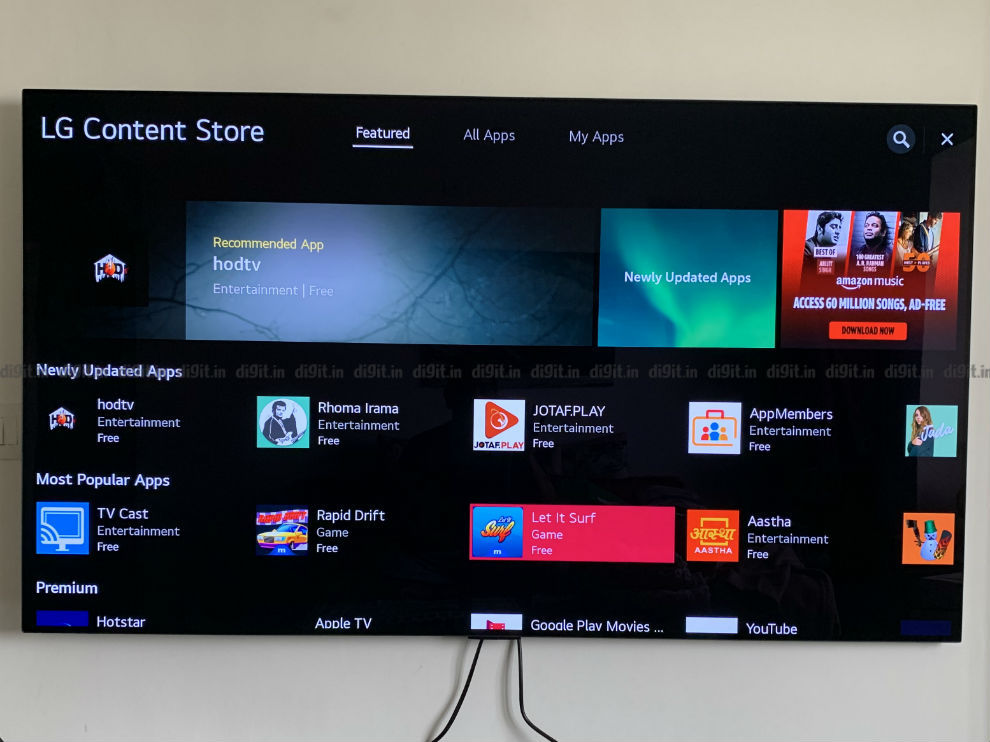 The apps pop up at the bottom of the display in a nice card like the layout and hovering over one of the apps leads to the second row of cards with content specific to the app. 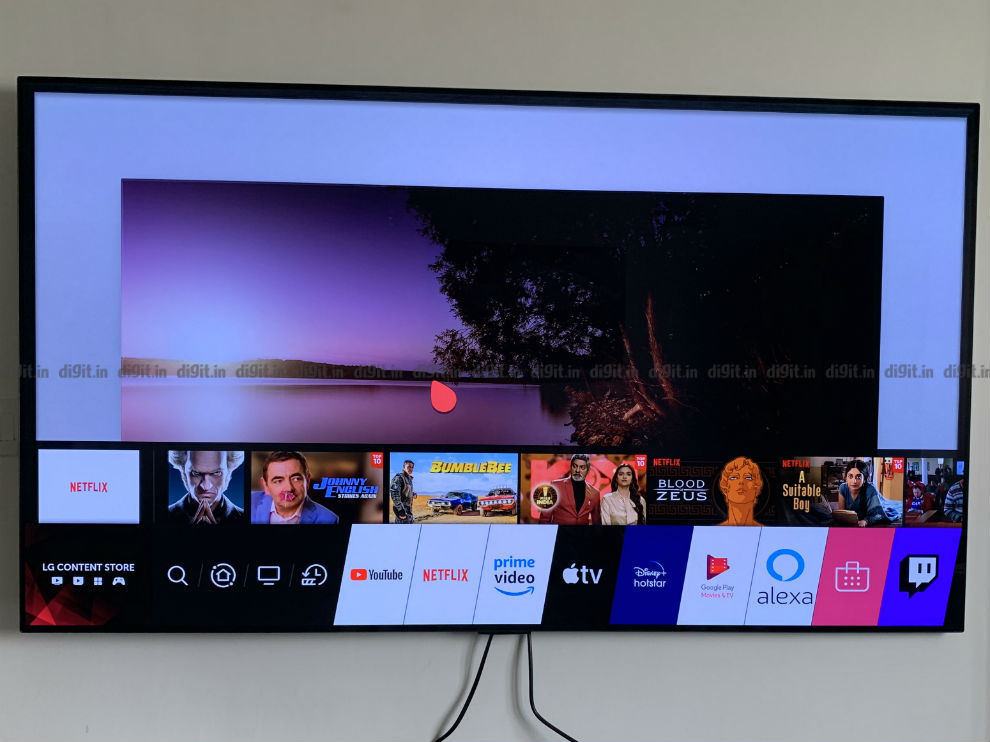 When changing picture settings also, each setting has a small box that explains what the setting does so it’s easy to know what you are tinkering with.

There is also a home dashboard where you can customise input names, and you can also add your home IoT devices to control from the comfort of the TV. This time around, the LG TV also has far-field mics so you can simply say “Hey LG” control the TV using your voice. It supports Google Assistant and Alexa from the get-go, which is nice. 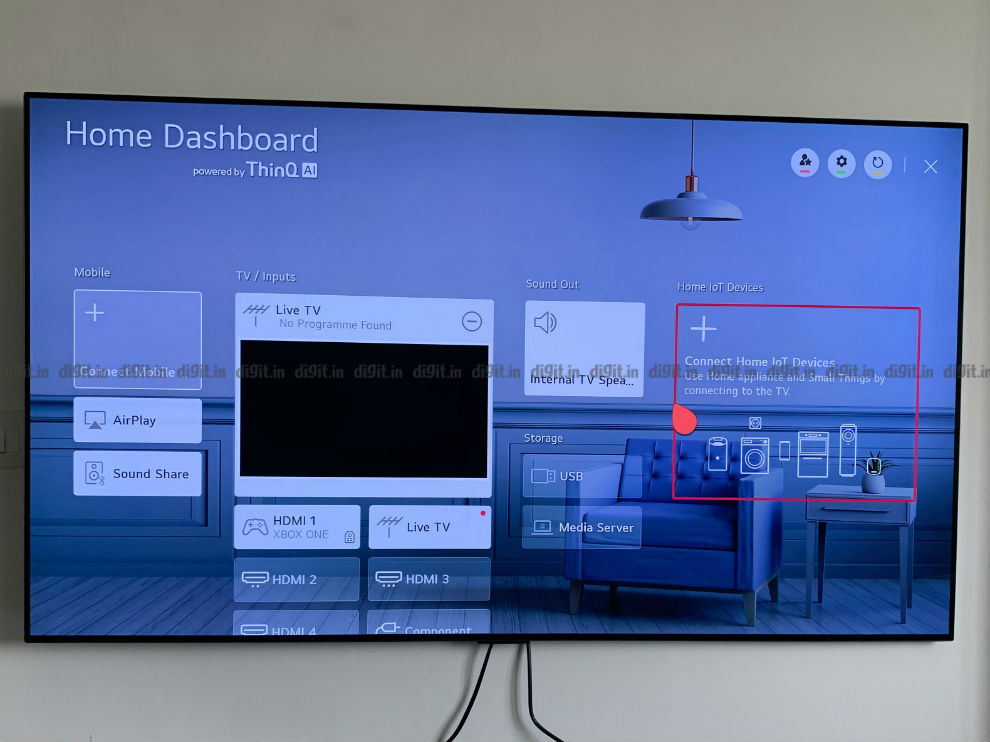 Overall, the LG UI has changed slightly from last year, and the changes are in the right direction. The apps library may not be as robust as the Play Store on Android TV, but it has all the popular and important apps. The only downside is that Hotstar needs to update the app to support Dolby Vision and surround sound like it has on the Fire TV Stick and Android TVs.

We have the same magic remote from last year and nothing has changed. The remote control has good construction and a slightly curved design. The remote is heavier at the back lending to its ergonomics. It feels hefty in one’s hands without feeling heavy. It is designed so that you can easily move it around to use the cursor on the screen. As for the buttons you have basic playback controls at the bottom (play and pause only) and dedicated hotkeys for Google Play Movies, Netflix and Prime Videos. Long pressing the Prime Videos button to bring up Alexa. 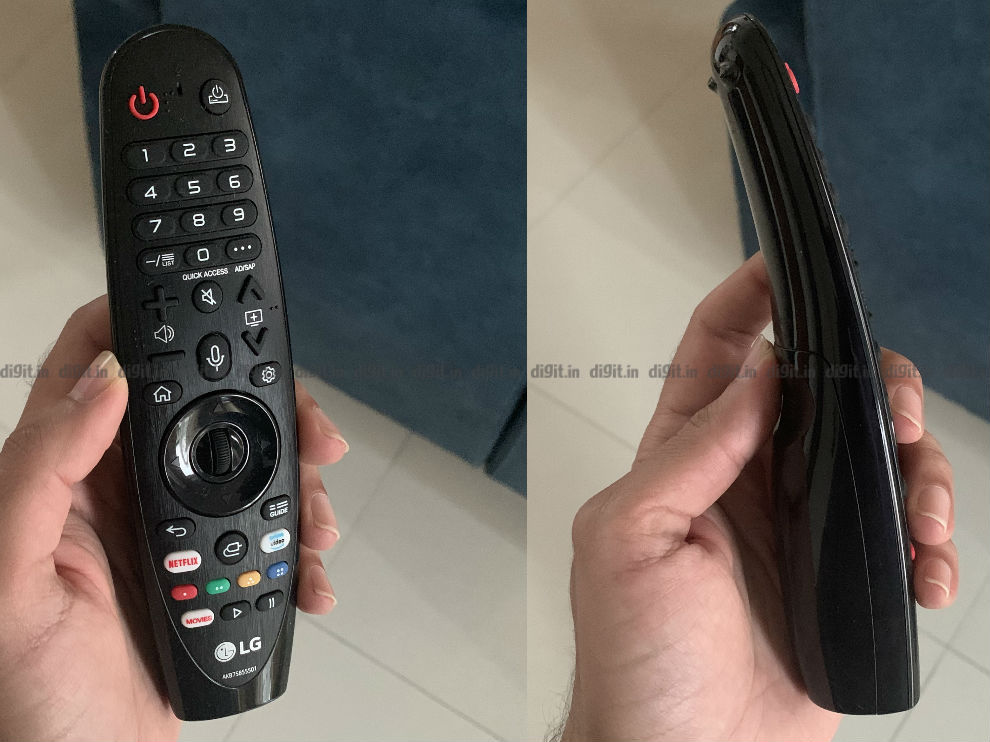 Most OLED TVs we’ve seen till now have a thin panel with a slight bulge at the back where the components and connectivity options are housed. That isn’t the case here. The thickness of the TV or rather slimness is uniform and it sits flush with the wall looking like a picture frame. When it comes to the design this makes the TV looks aesthetically pleasing in whichever room you place it. Add to it the fact that you can put pictures on the TV as a wallpaper, and you have a massive picture frame in your room. 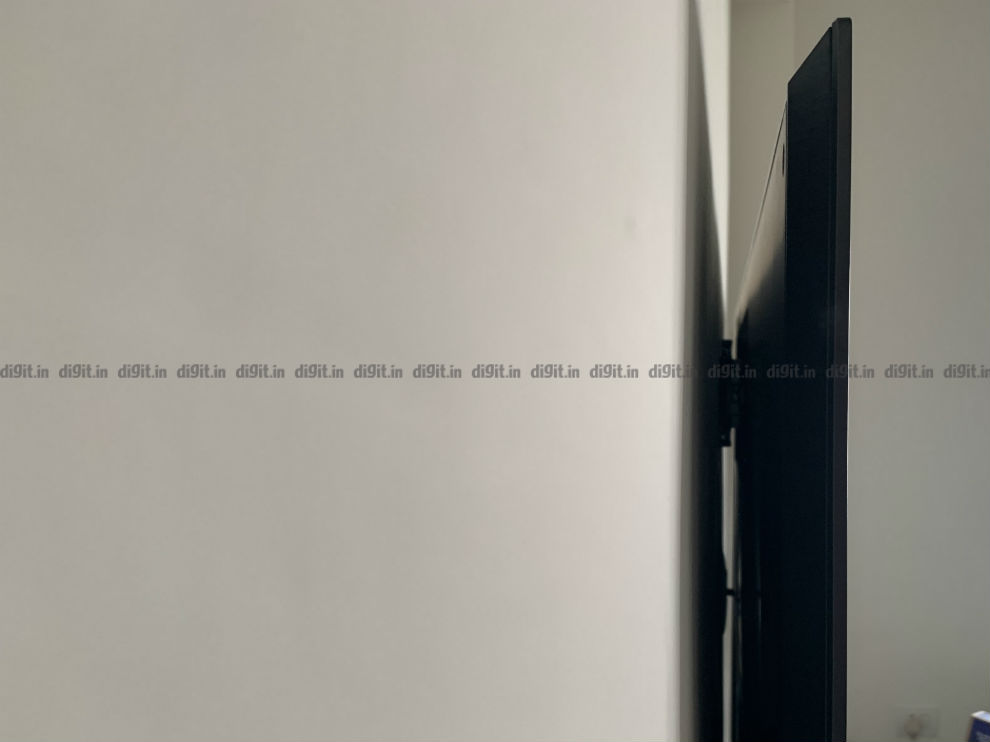 Even though the TV sits flush with the wall, you can extend it by pulling the TV in the front a bit. But it isn’t enough to let you comfortably reach the connectivity ports which is a bummer. You should most definitely connect all the cables you want to the TV before wall mounting it. The unergonomic nature of plugging in cables post wall mounting reminds of Samsung’s One Connect box. Maybe a similar solution would have been ideal here as well. 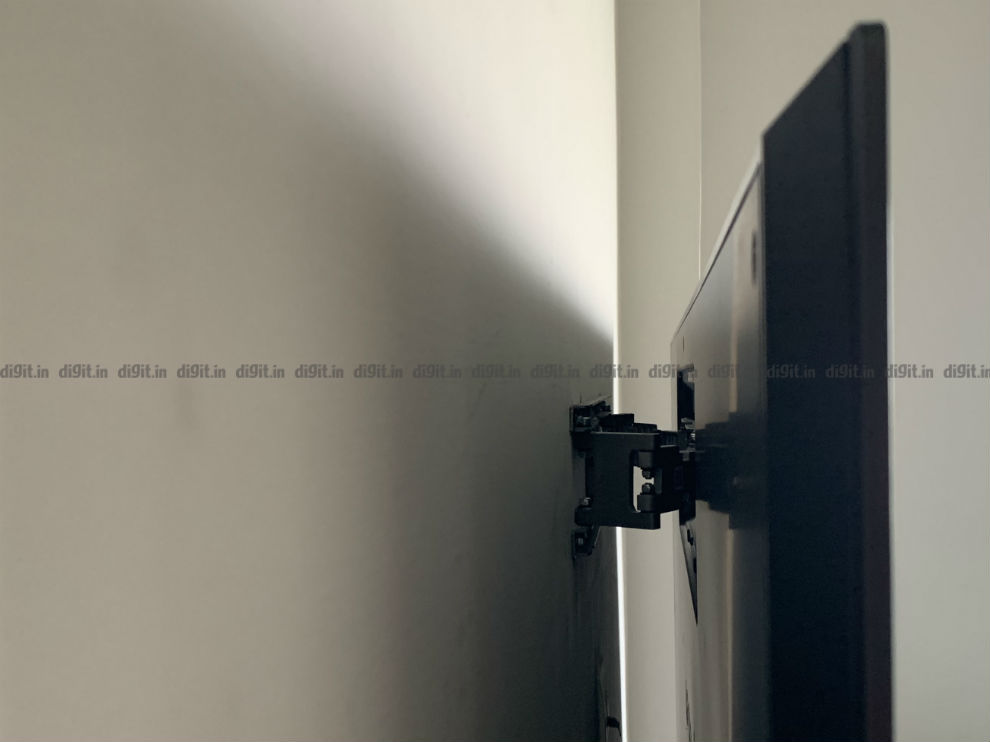 For connectivity, the LG GX has four HDMI port all of which are HDMI 2.1 enabled and three USB ports. It also has a LAN port, headphones out, RF input and optical port. 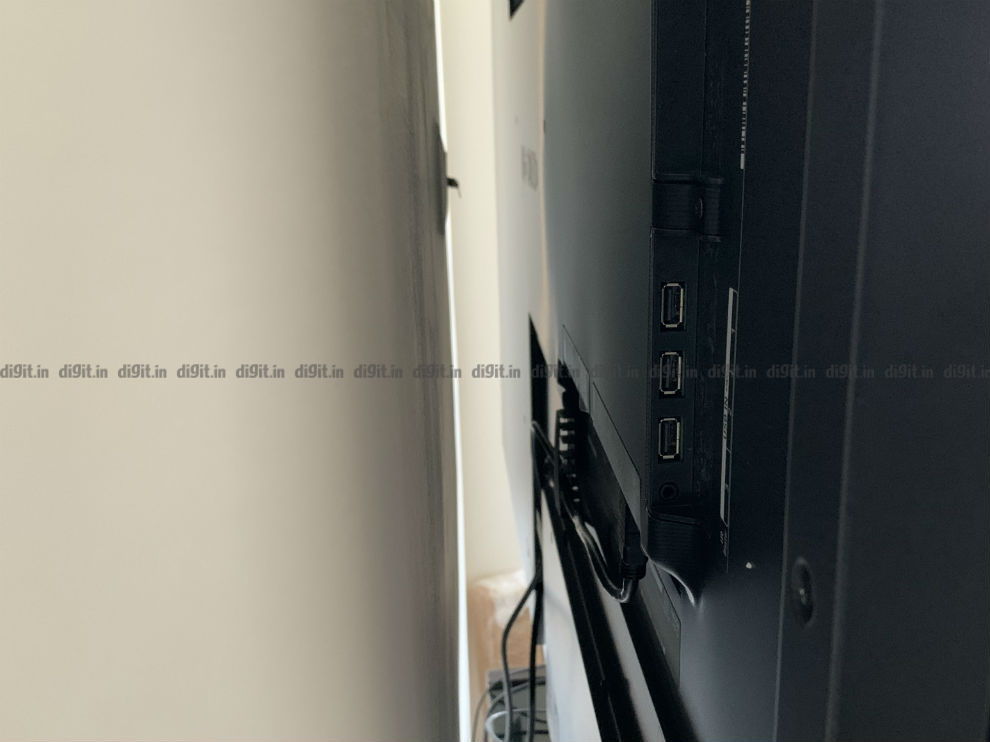 If gaming, along with content consumption is a priority for you, then it doesn’t get better than the LG GX. All of LG’s 2020 OLED models, the GX, CX and BX have HDMI 2.1 which makes the TVs ready for the Xbox Series X and PS5. The GX, in particular, has a sleek and stellar design, fantastic picture output for HDR content consumption and decent audio considering its slim profile. The UI is as good as ever, with the improvements to WebOS in all the right places. The only downside to the TV is that once you mount it on the wall changing cables and cable management can become a hassle.