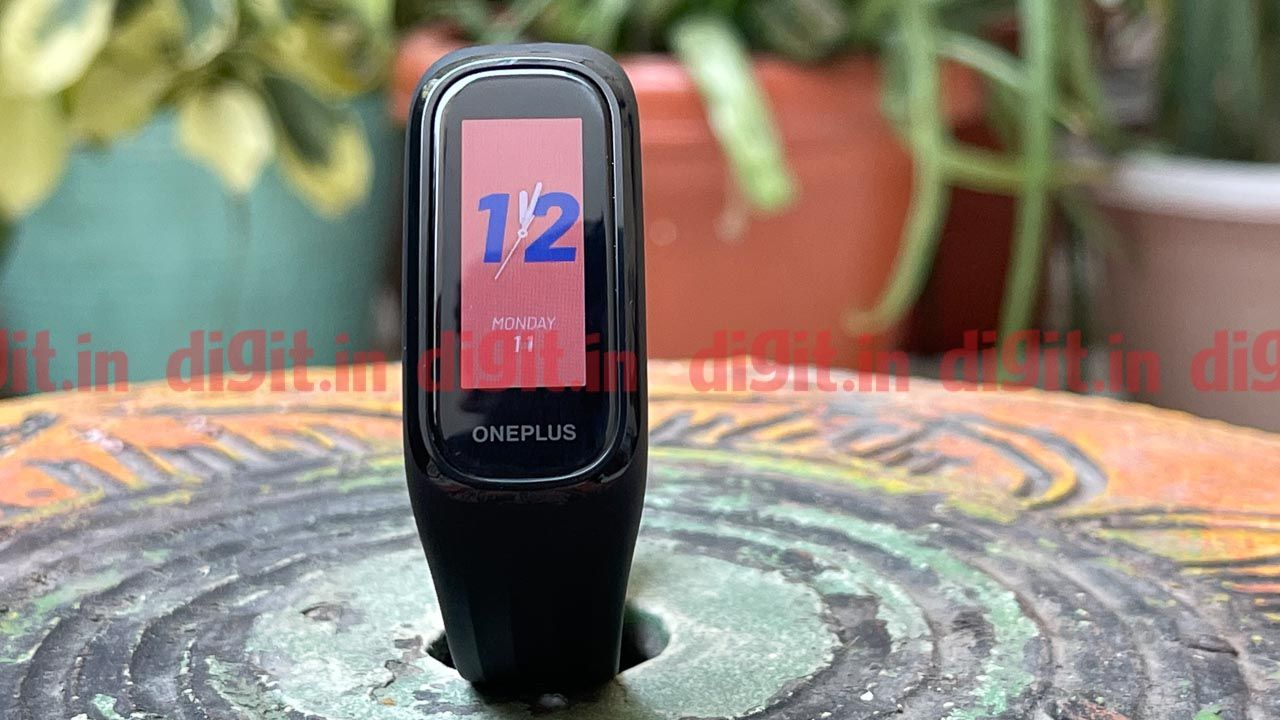 It was rumoured for quite some time that OnePlus was working on releasing a smartwatch. This is a rumour that dominated a good part of 2020, finally being put to rest when it was leaked that the watch would be delayed. We’re now in 2021, and we have the OnePlus Band being launched. Not quite the watch we expected, but definitely an interesting product. Why do we call it interesting? Read on to find out.

When you get yourself the OnePlus Band, there’s a sense of familiarity to it, and then there’s something that sets it apart from the likes of the Mi Smart Band 5 and others. The actual silicon band on the OnePlus Band has a nice ribbed finish to it and has a dual-tone colour treatment. It’s grey on the bottom side and black on the top. You could get yours in a grey-orange colour or the simple blue colour. There are no physical buttons on the band for navigation and such, but the 1.1” AMOLED panel offers a fully touch-sensitive area, allowing you to navigate through the band and its functions with swipes and taps. Charging is done by removing the core from the silicon strap and placing it on its dedicated charger. Honestly, for bands, there really isn’t a perfect charging solution. A built-in USB port wouldn’t make a lot of sense due to water and dust resistance concerns, so we’re stuck with an imperfect charging solution for now. What I also found a little annoying is the clasp. In order to get the right fit around the wrist, you’re going to need someone to hold the band in place, so that it doesn’t move while you pull the strap in order to fasten it. It’s not a perfect mechanism, but it is neat. 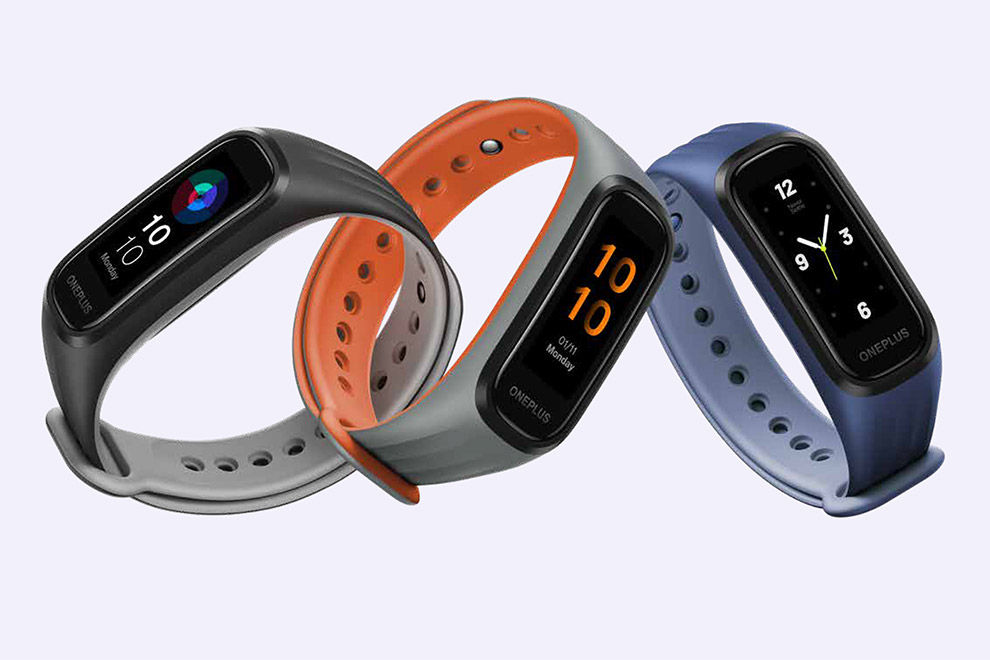 The OnePlus Band offers 13 activities that it can track which include the usual suspects like running, cycling, swimming, yoga and more. The built-in SpO2 sensor is there to offer more detailed statistics on the workout you perform while the heart-rate monitor picks up the rhythm of your heart while you sweat it out. I used the band to track a few evening walks and cycling sessions and concluded that for walks, the step count was reasonably accurate, and the heart rate data was in line with what was being picked up by the Apple Watch Series 6. While cycling, the band delivers your heart-rate data and if you take your phone with you, you also get GPS data. The net result is that the Health app gives you your calories burned, and the heart-rate metrics. If you go for a ride without your smartphone, however, you lose the GPS-based information since the OnePlus Band doesn’t come with GPS sensors on-board. 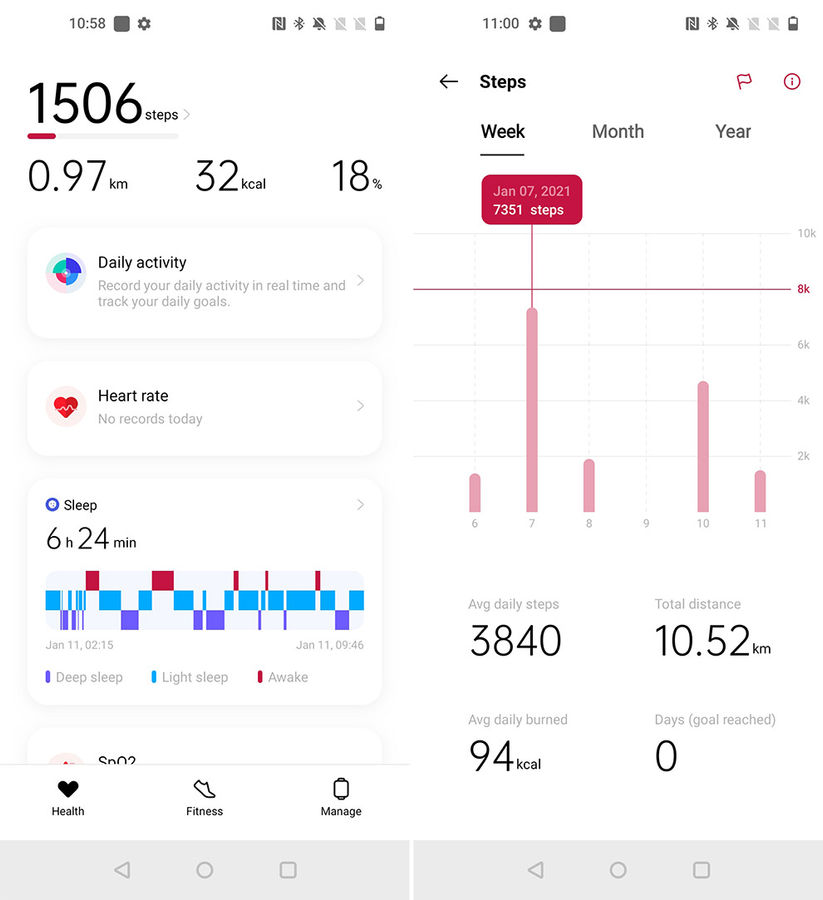 While the OnePlus Band doesn’t require a OnePlus smartphone, it does require the OnePlus Health App to pair and function. Pairing  and setting up the band is extremely easy and swift, and we faced no issues there. The Health App, however, is not the most intuitive app for managing health data that we’ve seen out there. The logic to see detailed stats is applied different to different sections (sleep vs. daily steps or daily steps vs. workouts). The “Daily Acitvity” tab shows you a 7-day calendar which starts with Monday, with the remaining 6 days being the 6 days of the future. This is completely wasted real estate, and should have ideally followed the login of showing today and the previous 6 days instead. This way, you’d have a week’s worth of fitness data available at a single glance. We do not see the point of having so much of a single tab dedicated to showing no data. It makes no sense. Additionally, you don’t get to see a detailed breakdown of your past workouts in the daily activity tab. There’s also no associated heart-rate data available in this part of the app. Step count is available through a different part of the main screen, but will only show you the total number of steps you’ve taken in the week/month/year, with the daily breakdown only showing up as a graph. 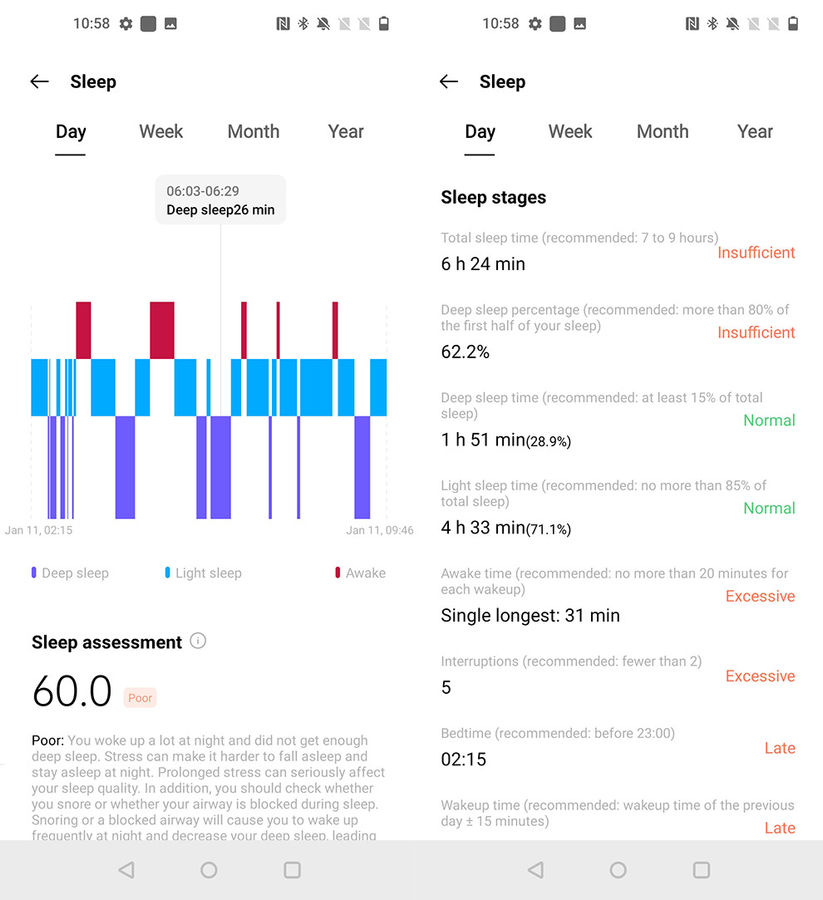 The OnePlus Health app is clean for sure, but it still needs a lot of refinement. Ideally, all data for a particular workout should be available in a detailed manner in one spot and not be fragmented over three different sections.

Now OnePlus claims 14-day battery life on the Band, which would be expected seeing how it offers very bare-bones sensors and limited smart capabilities. You will get notifications on the band, but you can’t do much with them. With no GPS on board, you won’t suddenly find the band’s battery drained by a significant amount, something that tends to happen with other wearable devices that come with onboard GPS. It’s been 4 days since I last charged the band to 100 percent, and it’s already at 45 percent.  I’m not so sure the band will make it to 14 days at this rate to be honest, but thankfully, charging the band back up hardly takes anytime. 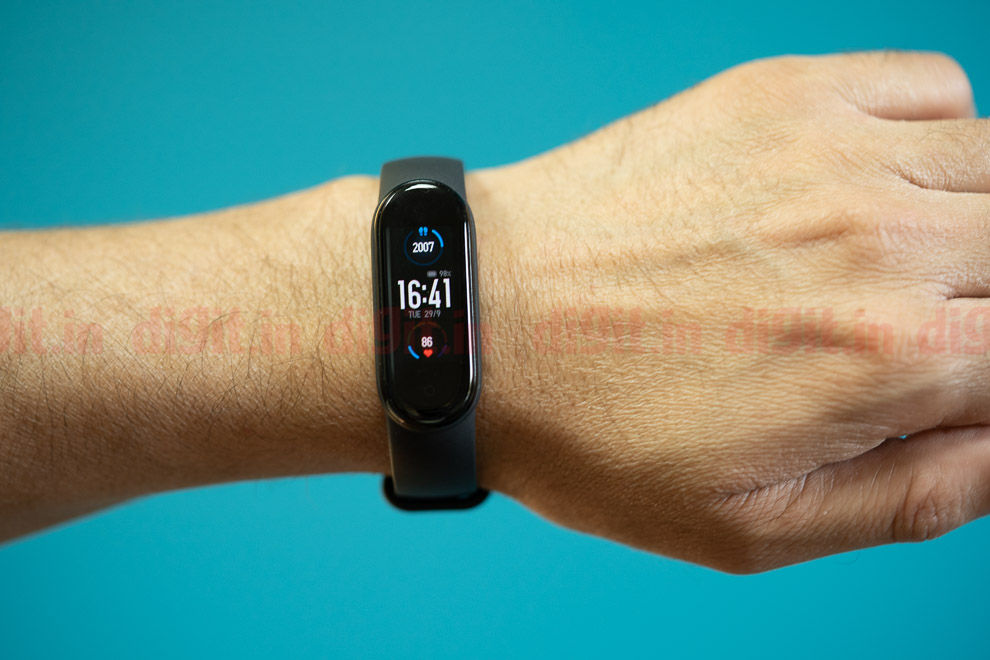 Should you buy the OnePlus Band

The OnePlus Band definitely looks better than most others in this segment. This is also a band that offers a minimal but well-thought-out feature set. It is, however, lacking in some regards. The OnePlus Health App isn’t as polished as, say, the Mi Fit app or the Xiaomi Wear app. The OnePlus Band is also missing the stress tracking feature, which is weird since it has all the right sensors. I do believe that OnePlus has the engineering chops to refine the app and the software of the Band further. While the experience isn’t poor out of the box, the OnePlus Band does feel like a first-generation device that needs some time to get better.