Skip to content
When it was launched in late 2015, began by hiring several senior executives from TCS. Six years and a pandemic later, the company is finally thinking like a . It now plans to offer stock options to prospective employees and revamp its organisational structure to attract the best talent around.

Also in this letter: 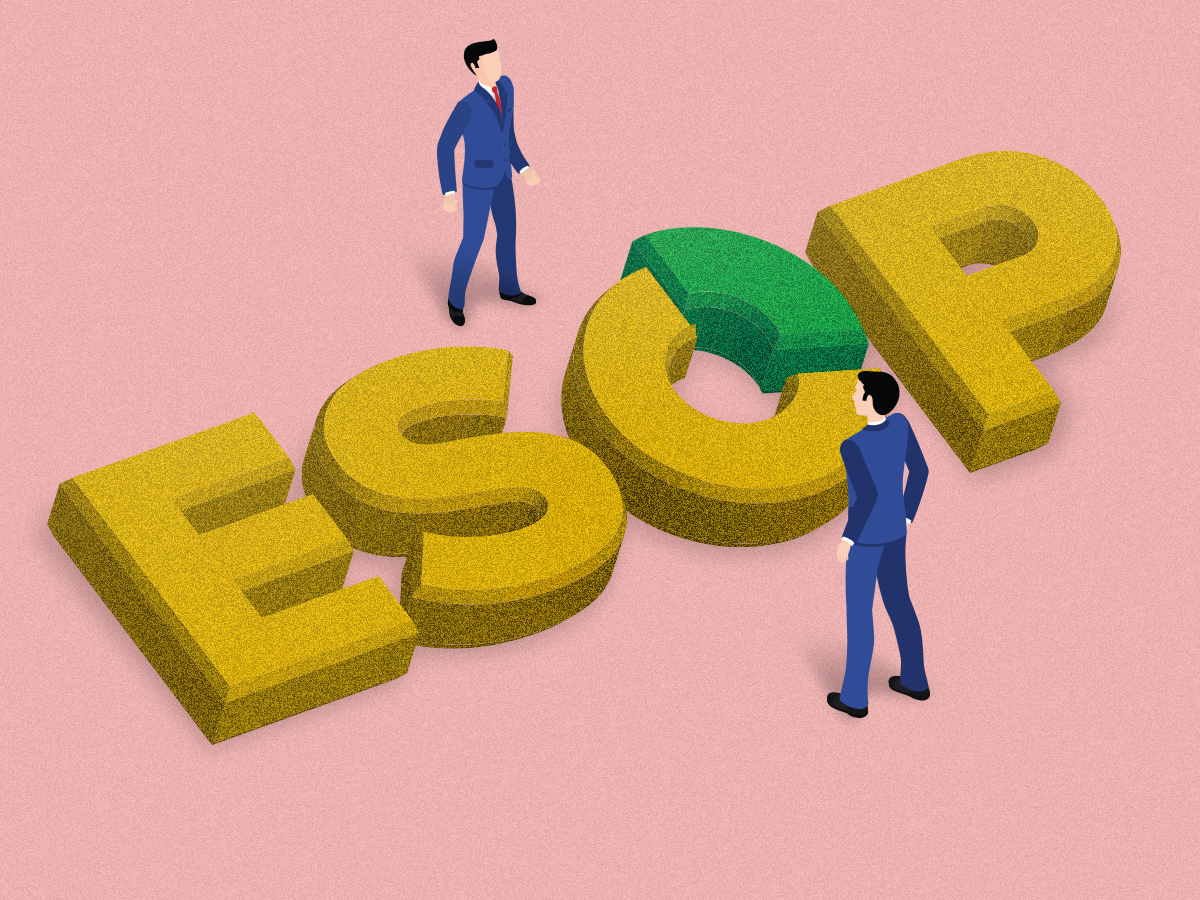 Tata Digital may offer stock options to all its employees to attract and retain the top talent from the startup community, sources told us.

The company houses Tata Group’s consumer-centric digital businesses and competes with startups. It had first offered management stock options to the founders of BigBasket, in which it picked up a 64% stake in May, based on the startup’s past performance and the future potential of eligible employees.

It may now extend similar offers to other employees as well because many candidates it has interviewed have asked for them, the sources said.

What’s the issue? In its early days, Tata Digital hired senior talent from Tata Consultancy services, the world’s largest IT services provider. This caused some experts to question whether it could create a startup-like culture and empower younger talent to take on unicorns and other fast-growing Indian startups.

“It is all about building unicorns and encashing stock options within a short period of time compared to established older conglomerates, who are into institution building,” said G C Jayaprakash, founder director of boutique executive search firm Accrete Executive Search.

What it needs to do: Jayaprakash said Tata Digital would have to offer pay packets on par with those offered by startups. It will also need to rework its organisational structure — a challenging task but one that’s already underway.

In June, the company had named Mukesh Bansal, founder and CEO of fitness startup CureFit, as its president. While it has appointed Modan Saha, a senior TCS talent, as CEO of its financial services vertical, it is not clear if heads of other verticals will also be made CEOs.

Plans to raise $5B: Tata Digital is also seeking to attract early investors to raise an estimated $5 billion for its TataNeu, its ‘super app’.

‘The last couple of years have been great for women leaders’

Chapman, winner of the Woman Ahead award at the Economic Times Startup Awards 2021, told us in an interview that such firms will generate more market capitalisation here than anywhere else in the world.

Here are some excerpts from the interview:

Financial services have unfortunately been male-dominated in India. Was it a challenge to crack this space?
It is much better than three years ago. The last couple of years have been great for women leaders. There is definitely more awareness. In fintech, there are actually some very strong female founders – there is Upasana Taku who is leading Mobikwik’s IPO charge. Mabel Chacko and Dina Jacob of Bank Open are strong founders. We definitely could do better, and we do need more female VCs – but it takes time.

When you cofounded ZestMoney in 2015, the Indian fintech ecosystem was far smaller compared to now. What made you bet on Indian fintech?
[As an equity researcher at Goldman Sachs], I happened to spend a month in Kochi, understanding the gold lending space, visiting small gold shops and dealers on the streets of Kerala. It was just so obvious then that India was about to explode, both from a consumer finance perspective and economically as well.

Many people in India understand credit cards and zero-cost EMIs but not BNPL, which is still nascent. How is ZestMoney introducing BNPL to customers?
In India, we found that EMI is understood very well. People in India also understand the difference between credit and EMI. With credit there is a slightly negative connotation, but EMI doesn’t have that. In our outreach, we use the concept of EMIs to explain our product proposition. There is just so much overlap that frankly it’s all jargon. What is important is that customers and retailers understand the product.

Why is it significant for Indian startups? Andreessen Horowitz’s entry into the Indian startup ecosystem comes amid frenetic funding from investors that have birthed 30 unicorns this year. According to industry tracker Venture Intelligence, Indian startups had raised $24.3 billion in total as of September 30, already surpassing last year’s amount by 2.2 times.

Regulatory flux: The meteoric growth of India’s crypto exchanges comes against the backdrop of regulatory flux, with little to no clarity from the government on whether crypto assets will be banned or not.

Read the full story for more.

Also read: India’s top 5 crypto platforms and what they offer 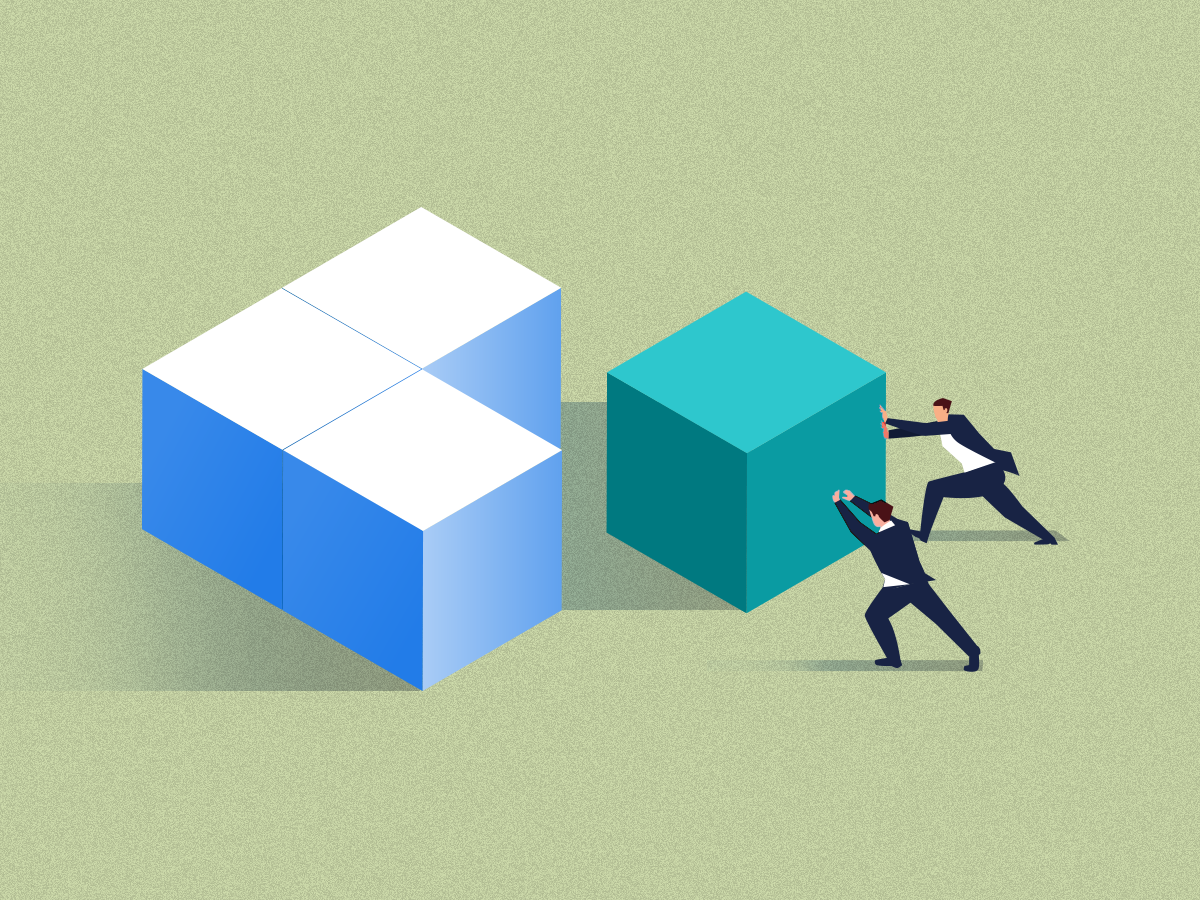 Though the companies declined to provide details of the deal, sources said the transaction — a mix of cash and equity — would amount to Rs 500 crore (about $66.7 million).

This is the largest M&A deal in the D2C beauty and personal care segment, which has attracted huge interest from investors in the past year. The Good Glamm Group acquired Baby Chakra earlier this year and content and commerce platform PoPXo in 2020. 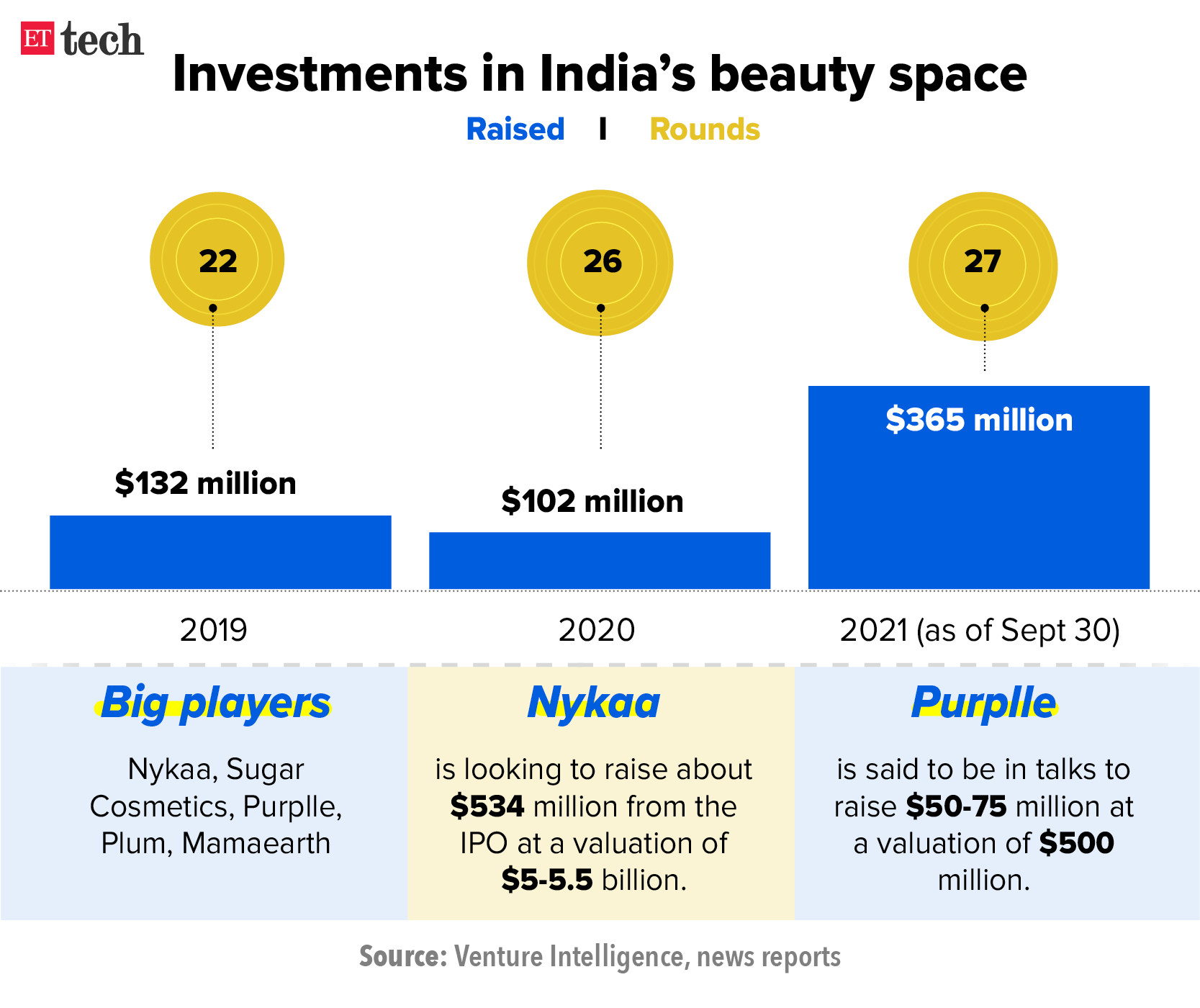 Experts suggest that the Indian beauty e-commerce industry could see a slew of acquisitions over the next 3 to 4 years as smaller, direct-to-consumer (D2C) brands reach scale, following a pattern established in the US.

Quote: “This acquisition gives us an entry into the skincare category and plays into the mom and baby category better,” Darpan Sanghvi, cofounder and CEO of Good Glamm Group, told us. “We are looking at growing The Moms Co. to a Rs 500 crore revenue run rate over the next 24 months,” he added.

■ Just five months after it was founded, Thrasio-style firm Mensa Brands has acquired 10 new-age brands in categories such as fashion, beauty and personal care, and home. Mensa, founded by former Myntra CEO Ananth Narayanan, has acquired anywhere between 51% and 75% stake in these brands and will grow them along with their original founders, Narayanan said. Karagiri, Priyaasi, Dennis Lingo, Ishin, Hubberholme, Anubhutee, Helea, Villain are among the brands in which Mensa Brands has picked up a majority stake. Each has an average revenue of $3-4 million.

■ Nazara Technologies, India’s first listed gaming company that is backed by billionaire investor Rakesh Jhunjhunwala, has raised Rs 315 crore from marquee investors by issuing fresh equity to them. The capital will be used for growth initiatives as well as to pursue strategic acquisitions across verticals to expand the company’s “Friends of Nazara” ecosystem, it said.

■ Qapita, an equity management platform, has raised $15 million in a Series A funding round led by East Ventures and Vulcan Capital to build an “operating system” for private markets in the Southeast Asia region. VC fund NYCA Partners participated in the fundraising, as did existing investors MassMutual Ventures and Endiya Partners and angels such as Anjali Bansal of Avaana Capital and Udaan cofounder Sujeet Kumar.

■ Tata Consultancy Services said that State Bank of India (SBI), India’s largest bank, has extended its contract for another five years as the bank embarks on its next leg of growth based on the three pillars of technology, resilience and people. 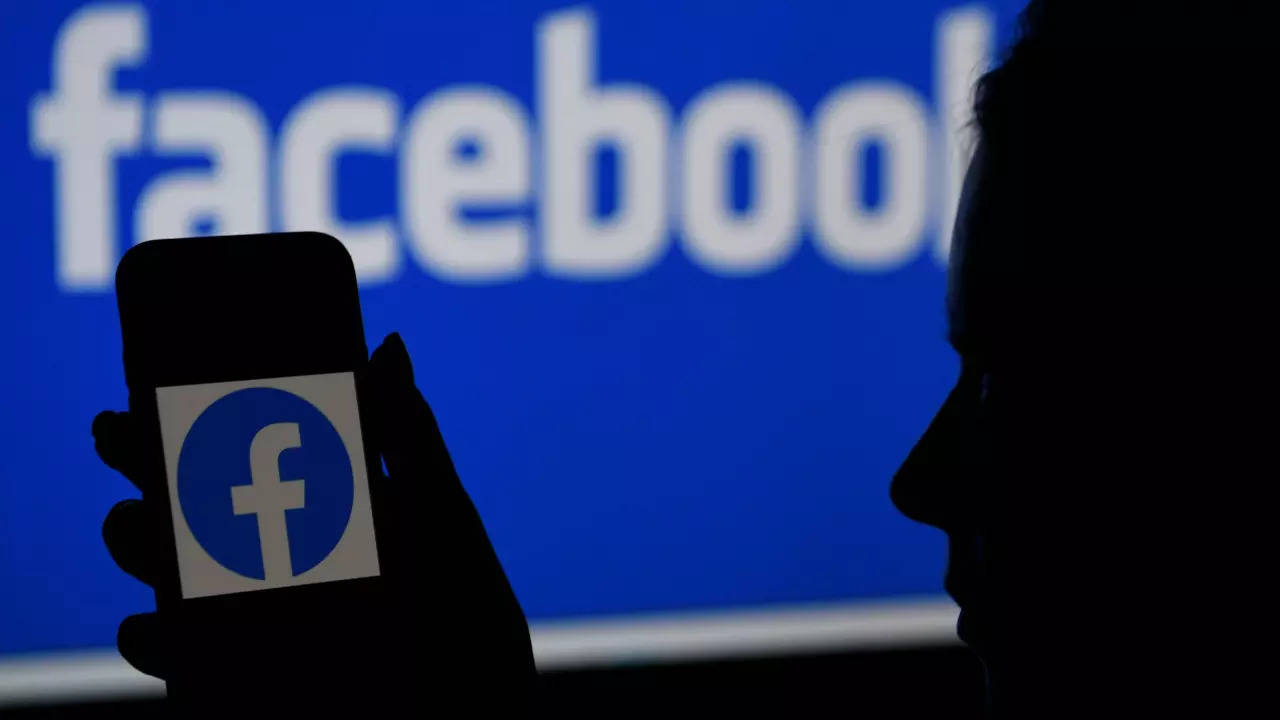 Facebook said it uses technology to proactively detect hate speech in Hindi and Bengali, and has reviewers flagging such content in 20 Indian languages.

What prompted that? The statement comes after former employee and whistleblower Frances Haugen filed a complaint with the US Securities and Exchange Commission (SEC) using internal company documents that cited “fear-mongering” content promoted by “Rashtriya Swayamsevak Sangh users, groups and pages”. The documents also said: “Our lack of Hindi and Bengali classifiers means much of this content is never flagged or actioned.”

Under-funded: Facebook allocated just 13% of its budget to counter misinformation and hate speech during the financial year 2020 to markets outside the United States, including India, according to the internal company documents. Facebook has 434 million monthly active users in India, more than twice as many as in the US.

Online retailers have roped in a record number of regional actors, celebrities, influencers and social media content creators to push their festive sales along with national celebrities as the online retail battle enters tier 3, 4 and 5 towns.

get off to a flying start: Smartphones, electronic items and fashion and lifestyle products have flown off the shelves in record numbers during the first three days of the ongoing festive sales at and Flipkart despite the inauspicious shraadh period, with business growing by 40-90% over the same period last year.

With demand likely to rise further during Navratri, several brands and sellers have reduced discounts for the rest of the sale period as supplies remain a challenge, multiple industry executives said. Prices of several products across fast-selling categories such as smartphone, television, appliance and fashion are up 5-18% compared with the first two-three days of the sale.

Forrester Research previously said that the e-tailers could clock a record $9.2 billion in gross sales during the festive month starting October 3 and that 70% of this would come in the first week.

Other Top Stories We Are Covering

Swiggy announces $35-40 million liquidity programme: Food delivery platform Swiggy said it will allow employees to cash in stock options worth $35-40 million over the next two years — in July 2022 and 2023. The programme is pegged at $35-40 million at Swiggy’s $5.5 billion valuation following its $1.25 billion funding round in July.

Global Picks We Are Reading