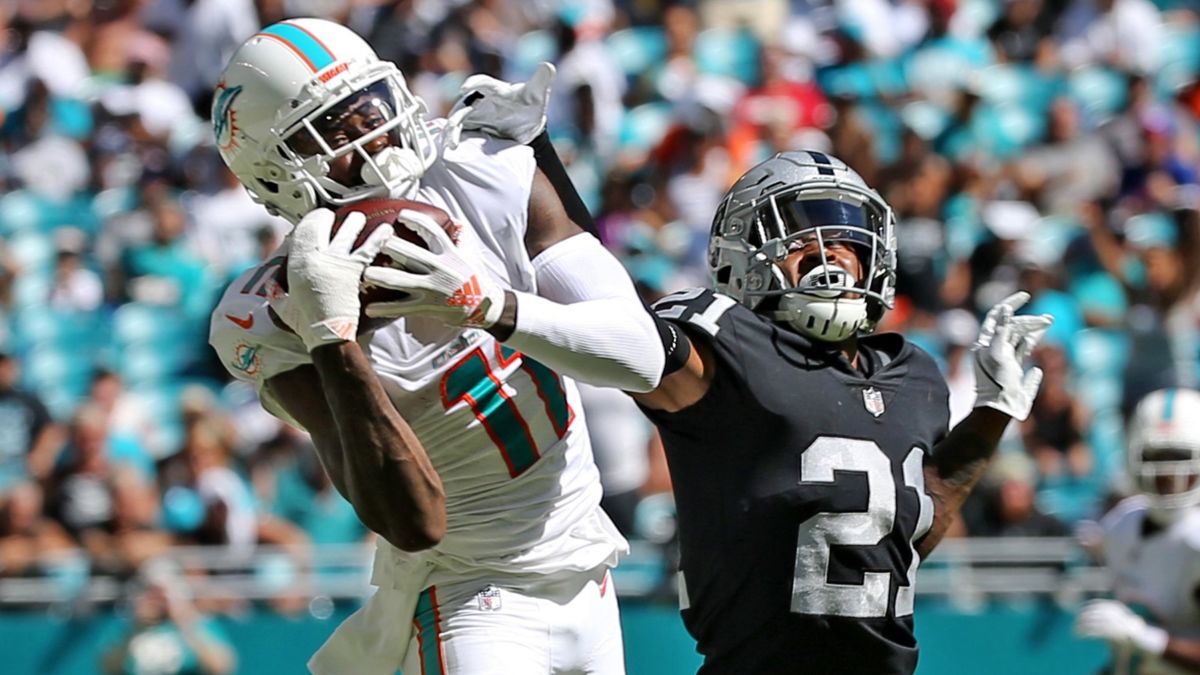 What a playoff race this is shaping up to be. Miami have the AFC’s seventh and final playoff spot in their grasp, but their fingers are greasy and Baltimore and Las Vegas are clambering all over them. The Dolphins have the toughest remaining schedule of all three franchises, and it’s going to be fascinating to see how this plays out. Read on as our guide explains how to get a Dolphins vs Raiders live stream today and watch NFL football online, no matter where you are in the world right now.

After a promising first half of the season, the Raiders have collapsed and now their only hope of making the playoffs is by winning out, hoping the Dolphins lose two in a row, and praying for the Ravens to slip up too.

The Dolphins vs Raiders game kicks off on Saturday, December 26 at 8.15pm ET / 5.15pm PT (1.15am GMT) at Allegiant Stadium in Paradise, Nevada. Full NFL football live streaming and TV channel details are below – and you can watch your preferred coverage from anywhere with the aid of a good VPN.

Miami are undoubtedly in the better position right now, but Week 17 brings a face-off with the seemingly unstoppable Bills, while Baltimore – who are only behind Miami because of their inferior conference win percentage – play their two remaining fixtures against the Giants and Bengals, who have eight wins between them this season.

Tua Tagovailoa’s triumph over Bill Belichick’s Pats last weekend, however, felt like a massive step. It was the first time in seven years that a rookie QB managed to get the better of Belichick in their first start against the wily old fox, and Tua did it the hard way, New England having shut out Miami in the first half.

He led by example, rushing for two fourth-quarter touchdowns as Miami racked up 250 yards on the ground. Belichick’s Pats have surrendered more rushing yards on only three occasions.

It’s a huge game, so follow our guide below as we explain how to watch the Dolphins vs Raiders online and get an NFL live stream wherever you are for this Boxing Day Football game.

How to watch the Dolphins vs Raiders from outside your country

If you’ve mismatched a holiday or you’re away on business and you want to watch your country’s coverage from abroad, then you’ll need to use a VPN. This will help you dial in to a location back in your home country to avoid geo-blocks and regain access to the content and services you already pay for back home.

Use a VPN to watch NFL football from anywhere

Sign up for an annual plan now and get an extra 3 months absolutely FREE. And if you change your mind within the first 30 days, let them know and they’ll give you your money back without a quibble.

Once you’ve chosen and installed your VPN of choice, simply open the service’s corresponding app, hit ‘choose location’, select the appropriate country, and you’ll be able to watch the broadcast as if you were back at home.

Today’s Dolphins vs Raiders game is being shown on NFL Network, with kick-off scheduled for 8.15pm ET/5.15pm PT.

How to watch Dolphins vs Raiders FREE without cable

In general though, we recommend fuboTV as the best to watch NFL games without cable this season.

That’s because for complete coverage of all nationally televised NFL games in the 2020/21 regular season without cable, you need access to Fox, CBS, NBC, ESPN and NFL Network – and only fuboTV currently offers them all to the best of our knowledge.

Pricing starts from $64.99 a month, which is a darn sight cheaper than cable, and there’s even a FREE 7-day fuboTV trial you can take advantage of. That means you can watch tonight’s game without paying a penny.

One of the things we love about fuboTV is that it makes canceling easy if you decide it’s not for you – and it’s easy to get started, too, thanks to a slick payment system that accepts internationally recognized payment platform PayPal as well as major credit and debit cards.

Not interested in signing up for cable or for a streaming service? Yahoo is showing every NFL game that’s being broadcast in your local TV market for free through its Yahoo Sports app, including the Miami Dolphins vs Las Vegas Raiders game.

Today’s Dolphins vs Raiders clash kicks off at 8.15pm ET/5.15pm PT in Canada, and TSN, CTV and RDS are providing linear TV coverage.

When it comes to streaming though, Canadian NFL fans are some of the luckiest in the world, as DAZN includes coverage of every single 2020/21 regular season game.

That obviously means the Dolphins vs Raiders game is covered, and it’s an absolute steal as DAZN costs just CA$20 a month or $150 a year – there’s even a free DAZN trial deal currently running that will get you access for nothing! Not only do you get every single NFL game, including NFL Game Pass and RedZone access, but DAZN’s also the exclusive Canadian streaming home of Premier League and Champions League soccer!

Raiders vs Dolphins live stream UK: how to watch the NFL online tonight

You can watch the Las Vegas Raiders vs Miami Dolphins in the UK on Sky Sports. Kick-off is set for 1.15am GMT on Saturday night/Sunday morning, and the game is being shown on both Sky Sports NFL and Sky Sports Main Event. The build-up gets underway at 1am on both channels.

If you don’t have a Sky package, fear not – there are plenty of options available that will allow you to get a Raiders vs Dolphins UK live stream. The first is Sky’s own streaming service, Now TV.

Alternatively, you could consider NFL Game Pass Pro, where £49.99 gets you every single game remaining in the 2020/21 season (subject to blackouts) including the playoffs, Super Bowl, RedZone and more!

Alternatively, you can pay a mere £1.99 for a 7-day Game Pass subscription and stream all this weekend’s biggest NFL games – including the Raiders vs Dolphins, which kicks off at 1.15am in the UK.

Not in the UK but still want to catch the action on Game Pass? Grabbing a VPN will let you log into a UK IP address so you can live stream NFL as if you were at home.

How to watch Raiders vs Dolphins: live stream the NFL in Australia

If you live in Australia and want to watch the NFL this season, you have several options to do so and are well covered for the Raiders vs Dolphins game, which is scheduled to start at 12.15pm AEDT on Sunday afternoon.

ESPN, available through Foxtel, is broadcasting the game, and you can also stream it to your laptop or mobile device using the Foxtel Go app, but you’ll need your Foxtel ID to access the app.

Kayo Sports is showing the Raiders vs Dolphins game too, and is the ideal option for those who don’t want the commitment of a lengthy (and pricey) contract.

However, for the proper, live-for-it NFL fans, we highly recommend you sign up for an NFL Game Pass as it is also available in Australia, and even though it is marginally more expensive you have a much wider range of features.

It’s really geared towards international fans and that’s where it’s a great option. In most of the NFL’s main international markets, a Game Pass Pro subscription will get you access to every single regular season and playoff game live, plus the Super Bowl, and you also get the league’s live highlights show, RedZone. It costs £1.99 a week on deal right now for complete access – or £50 to see you through July 2021. If you’re a big fan who watches multiple games every week, it breaks down quite favourably.

The only caveat for non-domestic markets (e.g. the UK) are that some games are subject to blackout restrictions due to deals with local pay TV providers (such as Sky).

The Raiders, meanwhile, have had a long week to recover from their hugely damaging Overtime defeat to the Chargers. Marcus Mariota could once again fill in for Derek Carr, who’s touch and go after picking up a groin injury early on in that game.

Mariota brought some much-needed new energy to the Raiders’ offense after coming on, and always looked capable of making something out of nothing, but until Vegas’ defense gets a grip they’re never going to stand a chance.