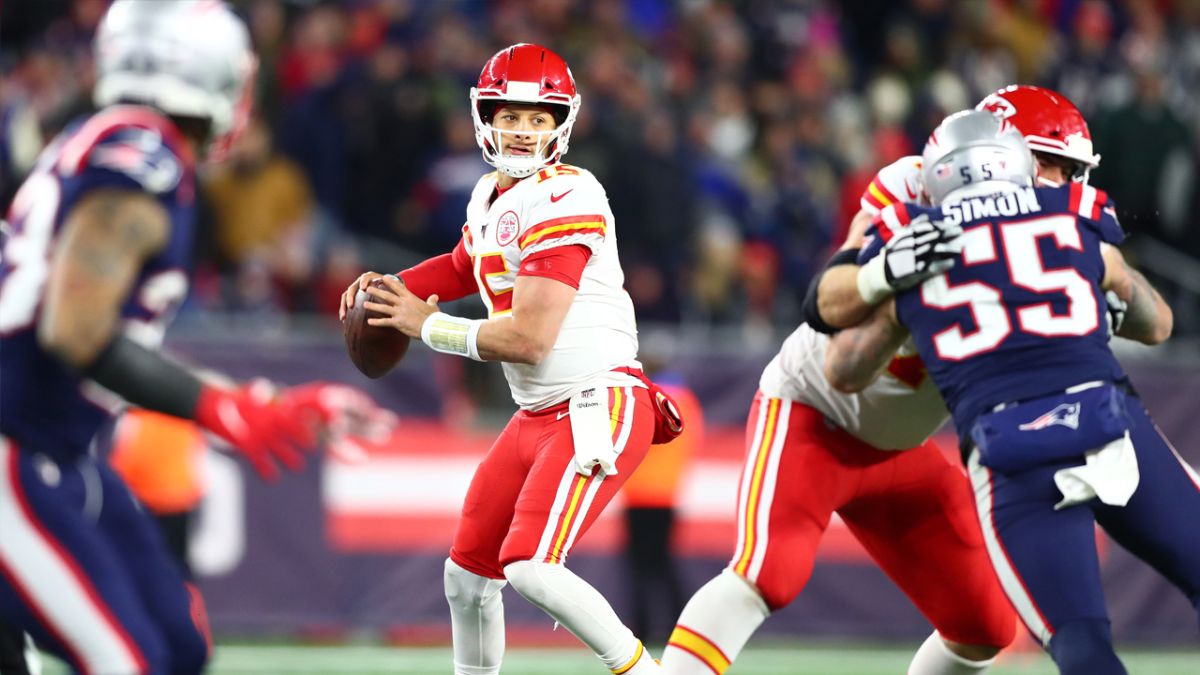 For a while there, it looked like this game week 4 match-up might not happen following the positive Covid tests of Cam Newton and other players. Instead, it has merely been shoved back by a day and given us a massive Monday Night Football double header! Read on as we explain how to watch the NFL online and get a Patriots vs Chiefs live stream wherever you are right now.

Wow. Patrick Mahomes and the Chiefs made light work of the side many see as the reigning champions’ biggest rivals for the Super Bowl in week 3, a huge statement that precisely nobody outside of Kansas wanted to hear.

Kick-off time for today’s rearranged Patriots vs Chiefs game is 7.05pm ET/4.05pm PT, which is 12.05am BST in the UK. A number of TV and streaming options are available for the game, and you can always enjoy your favorite NFL coverage wherever you are by using a reliable VPN – try our No. 1 pick ExpressVPN risk-free for 30-days.

Mahomes threw for four touchdowns as KC romped their way to a 34-20 victory over the Ravens on MNF, and it’s hard to see how the Patriots – how anyone – could possibly resist them today or any other day.

If there’s any coach capable of cooking up a plan to foil the Chiefs, it’s Bill Belichick. The Pats’ 36-20 win over the Raiders was the 275th regular season victory of his NFL coaching career – something only two other coaches have achieved – and his side has a good 2-1 record against Mahomes.

Sony Michel had a terrific Week 3 for New England, carrying the ball 117 yards against Las Vegas.

Fancying a flutter? Our NFL Win Probability widget lets you see the latest percentage chances on a win, lose or draw – as well as the very latest betting odds.

The Patriots’ defense has been looking awful shaky though, and even in their win over the Raiders they surrendered 375 yards of offense. On another day they could have easily have been punished. A week earlier they gave 429 yards to Seattle and paid the price, conceding 35 points on their way to a 35-30 defeat.

With their opponents in red-hot form, New England can’t be doing them any favors. Follow our guide below to watch the Patriots vs Chiefs online and get an NFL live stream from anywhere this Sunday.

How to watch the Patriots vs Chiefs from outside your country

If you’ve mismatched a holiday or you’re away on business and you want to watch your country’s coverage from outside your country, then you’ll need to use a VPN. This will help you dial in to a location back in your home country to avoid geo-blocks and regain access to the content and services you already pay for back home.

Sign up for an annual plan now and get an extra 3 months absolutely FREE. And if you change your mind within the first 30 days, let them know and they’ll give you your money back without a quibble.
View Deal

NordVPN – the biggest name VPN out there
NordVPN remains the huge, all-star name in the world of VPNs, with a massive presence on the web thanks to its YouTube and podcast sponsoring. But it plays a good throwing game, too, jam-packed with features and extra security barriers – plus its multiyear plans are very nicely priced.
View Deal

Surfshark VPN – the most affordable VPN around
The above two VPNs looking a bit rich for your blood? Then Surfshark is another top rated, premium VPN – just at a much better price! From only $2.50 USD, you still get the benefit of anonymous internet use, IP address spoofing and a 30-day money back guarantee.
View Deal

Once you’ve chosen and installed your VPN of choice, simply open the service’s corresponding app, hit ‘choose location’, select the appropriate country and you’ll be able to watch the broadcast as if you were back at home.

Coverage of the Patriots vs Chiefs today is provided by CBS, and kick-off is scheduled for 7.05pm ET/4.05pm PT. If you haven’t got CBS and want to subscribe, then know that CBS All Access is also available on a streaming-only basis from just $5.99 a month – try it for free today.

Alternatively, CBS is offered by over-the-top streaming service FuboTV, which is the best option for US-based fans looking for comprehensive football coverage this season as it’s the only service with all five channels that are showing NFL games this season: CBS, Fox, NBC, ESPN and NFL Network.

Pricing starts from $64.99 a month, which is a darn sight cheaper than cable, and there’s even a FREE 7-day FuboTV trial you can take advantage of. That means that today’s Patriots vs Chiefs game can be watched absolutely free!

One of the things we love about Fubo is that it makes canceling easy if you decide it’s not for you – and it’s easy to get started, too, thanks to a slick payment system that accepts internationally recognized payment platform PayPal as well as major credit and debit cards.

Today’s Patriots vs Chiefs clash kicks-off at 7.05pm ET/4.05pm PT in Canada, just like it does in the US. When it comes to streaming Canadian NFL fans are some of the the luckiest in the world as DAZN includes coverage of every single 2020/21 regular season game.

It’s an absolute steal at just CA$20 a month or $150 a year. Not only do you get every single NFL game, including NFL Game Pass and RedZone access, but DAZN’s also the exclusive Canadian streaming home of Premier League and Champions League soccer!

It comes with support for iOS, Android, Apple TV, Chromecast, Amazon Fire TV, Android TV, Roku, Xbox One, PS4, and laptop/PC streaming (including Mac devices). And if you’ve never used it before, you can take advantage of a FREE 1-month TRIAL, too.

Don’t forget, you can take your preferred NFL coverage with you no matter where you are in or out of the Great White North – just grab hold of an effective VPN and follow our instructions above.

UK-based American football fans can watch up to six NFL games live and in their entirety each week courtesy of Sky Sports, with the network now boasting a new dedicated Sky Sports NFL channel as well as offering access to the live RedZone highlights show each Sunday.

Patriots vs Chiefs now kicks off at 12.05am BST in the early hours of Tuesday morning, and is being shown on Sky Sports Main Event.

If you don’t already have Sky and aren’t up for subscribing, the best option right now to watch these games in terms of value for money is Now TV, whose Sky Sports Monthly Pass is currently price slashed to just £25 a month – nearly £10 off its regular asking price (£33.99) and as always you can cancel at any time. Now TV also offers a £9.99 24-hour pass if you really only need to watch a game or two.

You can also tune in through the NFL Game Pass Pro, with £143.99 getting you every single game of the 2020/21 season (subject to blackouts) including the playoffs, Super Bowl, RedZone access and more!

Not in the UK but still want to catch the action on Game Pass? Then grabbing a VPN will let you log into a UK IP address so you can live stream NFL as if you were at home.

How to watch Patriots vs Chiefs: live stream NFL in Australia

Foxtel offers up ESPN’s football coverage to Australian viewers, and you can also catch select games on the Foxtel Go app. Unfortunately, this rearranged game won’t be offered with either Foxtel or Kayo Sports this Monday (it was originally supposed to be shown). That means you’ll want to head over to NFL Game Pass to watch NFL online.

Make sure you’re ready before kick-off at 10.05am AEDT on Tuesday, October 6.

It’s really geared towards international fans and that’s where it’s a great option. In most of the NFL’s main international markets, a Game Pass Pro subscription will get you access to every single regular season and playoff game live, plus the Super Bowl, and you also get the league’s live highlights show, RedZone. It costs £14.99 a week or £143.99 a year, so if you’re a big fan who watches multiple games every week, it breaks down quite favourably.

The only caveat for non-domestic markets (e.g. the UK) are that some games are subject to blackout restrictions due to deals with local pay TV providers (e.g. Sky).