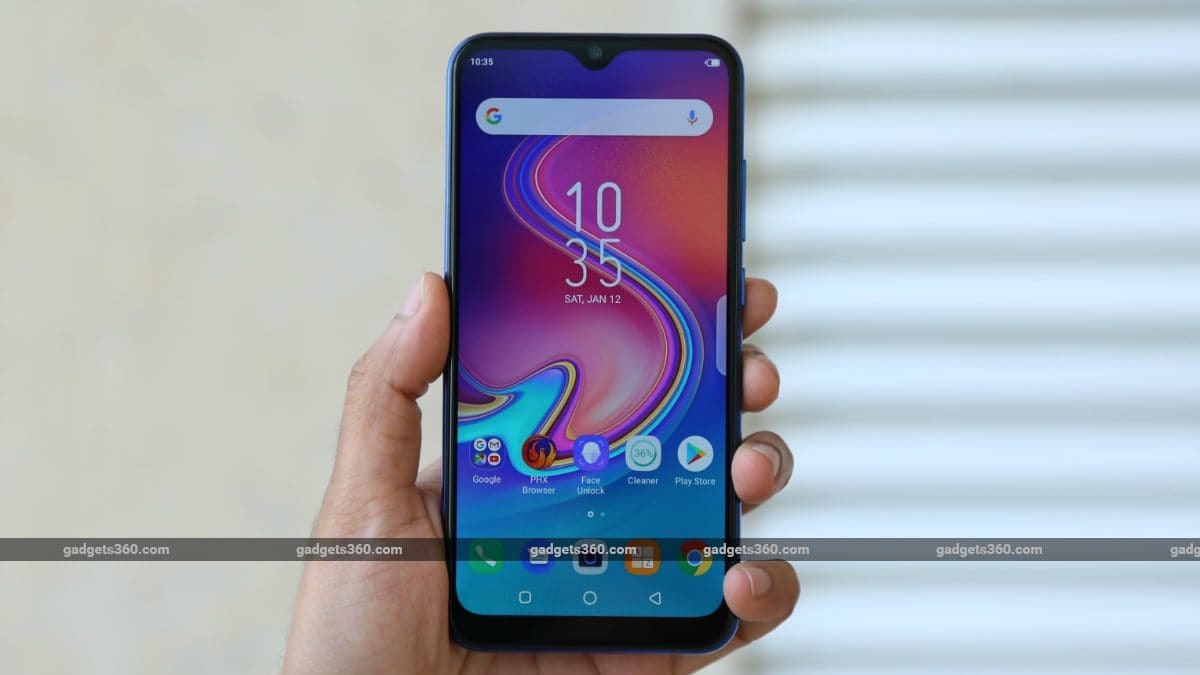 Infinix has been selling budget smartphones in India for some time and the company has focused its attention on the price segment of less than Rs 10,000. We have reviewed several models of the Infinix brand including the Note 5, Hot S3X and Note 5 Stylus (review). Infinix S4 is the latest smartphone of the company and this smartphone is equipped with three rear cameras. The phone has a large battery to burn. Is Infinix S4 better than its counterweight handset? We have reviewed it to find out this.

Looking at the glossy back panel, it seems that it is made of glass but plastic has been used to make it. Due to having a glossy back panel, fingerprints fall easily on it. In the retail box, you will find a case from Infinix. The Infinix S4 has a larger display with waterdrop notch and the bezels are not too thick.

Our review unit was already equipped with a screen protector and an extra was also provided in the retail box. The earpiece of the Infinix S4 is quite slim and has got space between the frame and the display. We found that the phone fit easily in the hand and it was not too heavy. Infinix has got the power and volume buttons on the right side of the phone.

For the information of the people, let us know that the camera module is slightly embossed. Just below the camera module is a quad-LED flash. For security, fingerprint sensor will be found on the back of the phone, the hand reaches the sensor easily. At the bottom of the phone you will find a loudspeaker grill, 3.5mm headphone jack and micro-USB port.

The Infinix S4 has a 6.21-inch HD + (720×1520 pixels) display with an aspect ratio of 19.5: 9 and 2.5D curved glass for display protection. Its screen-to-body ratio is 89 percent. The outdoor had no problem reading on the display. The display is crisp and we were happy with its output, although we could not find a way to change the color temperature.

The phone has an eye-care feature that filters the blue latch to protect the eyes from stress. The Infinix S4 uses the MediaTek Helio P22 octa-core processor. Gradually, the use of this chipset is becoming common in this price segment. The same processor has also been used in Realme C2 (review) and Oppo A1k.

There is only one variant of Infinix S4 which is equipped with 3 GB RAM and 32 GB storage. It has a dedicated microSD card slot with the help of which it is possible to increase the storage up to 256 GB. Connectivity includes Bluetooth version 5, Wi-Fi 802.11 a / b / g / n, GPS and 4G VoLTE. To make life in the phone, a 4,000 mAh battery has been provided and a 10-watt charger will be available in the retail box.

The dual-sim Infinix S4 runs on XOS 5.0 based on Android Pie. This is the latest version of Android and our review unit was running on the April Security Patch, which is acceptable. The phone has some UI customization and does not look like stock Android.

The phone also has theme support and if you wish, you can also download other themes through the pre-installed themes app in the phone. Infinix S4 will also get some apps pre-installed like PHX browser, Google Apps and Danger Dash. The PHX browser sends spammy notifications so we had it uninstalled.

The Infinix S4 also has some useful features that help the user, such as the phone has an AIBox feature that clubs incoming notifications and only shows alerts for the apps you want to see. It also has a smart panel that can be accessed from anywhere and includes some shortcuts.

Apart from this, the phone also has intelligent voice broadcast feature which reads the weather and your day-long schedule after the alarm goes off in the morning. We tried using this feature and it works correctly but the voice or language cannot be changed. It also reads WhatsApp and Facebook updates.

The Infinix S4 uses the MediaTek Helio P22 processor and has good performance. The phone did not slow down while scrolling through the menu or switching between applications. There was no problem in multitasking due to the phone having 3 GB of RAM. Infinix S4 takes a little longer than normal to load large apps.

PUBG Mobile had low preset, graphics quality smooth and frame rate set to medium. During gaming, the phone did slow down a bit. After playing the game for 20 minutes, the battery dropped by 5 percent and the phone was also slightly heated on the back side of the phone. We found that the fingerprint sensor and face recognition feature unlock the smartphone faster.

A 4,000 mAh battery has been provided to infuse the Infinix S4. We used WhatsApp, Google Maps for navigation, running benchmarks and taking some camera samples. In our HD video loop test, the phone supported for 17 hours and 35 minutes. The charger that comes with the phone takes up to 31 percent in 30 minutes and takes about 2 hours to fully charge the phone.

Talking about camera setup, the Infinix S4 has three rear cameras, a 13-megapixel primary sensor with aperture F / 1.8, an 8-megapixel ultra-wide camera with an aperture F / 2.2 and a 2-megapixel depth sensor. Just below the camera module is a quad-LED flash. There is a 32 megapixel selfie camera for selfie and video calling, which has an aperture F / 2.0.

The camera app has an AI feature and the Infinix S4 will get AI enabled by default. Buttons are available for HDR and flash, as well as buttons for switching to wide-angle sensors. Modes like Beauty, Bokeh, Video and AR Shot will also be available in the camera app.

You can choose the level of blur when taking portrait shots but we found the edge detection quality to be below average. Quality was not very good in low-light. The photos were not sharp and grains were visible in the photos. Selfies captured with front camera came out good. The phone also has a face detection feature that helps in getting the right exposure before taking a picture. The phone is capable of recording videos of maximum 1080p resolution. The phone does not have stabilization support.

The Infinix S4 is equipped with three rear cameras in the price segment of less than Rs 10,000. Its wide-angle sensor comes in handy when shooting in landscape mode and the primary sensor captures good pictures in daylight. But the low-light camera performance of the phone is not very good. The MediaTek Helio P22 processor in this price segment is not a very powerful chipset but still it works correctly.

For Rs 8,999, the Infinix S4 seems a bit premium compared to the Realme C2 (review) present in the market. The Infinix S4 has a fingerprint sensor sport and its cameras are slightly better. Redmi 7 can also prove to be its strong alternative.