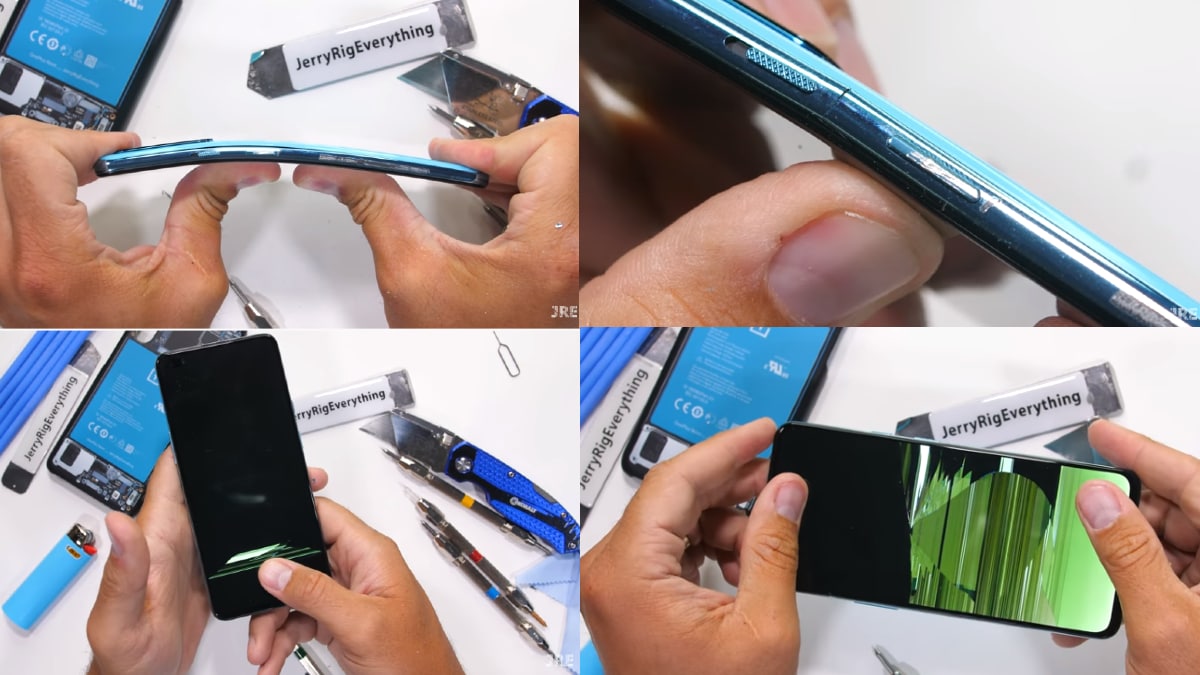 OnePlus Nord has been tested by JerryRigEverything, which is famous for scratching and band testing smartphones. In testing, OnePlus passed the Nord scratch test, but in the band test and fire test, the smartphone struggled to survive. While testing, the external body was protected by putting pressure on the phone, but the inside was prone to break, and by putting a little more pressure, the screen inside the display was also completely damaged. OnePlus Nord has emerged as the most popular smartphone of the quarter, as the company has launched this smartphone with some good specifications and aggressive pricing. However, to reduce the price, the company has made agreements in some parts, which have been revealed in the testing video of the phone.

Zac Nelson, who runs a YouTube channel named JerryRgEverything, tested OnePlus Nord’s display by scratching the surface at various levels. The video found that scratches started to appear on the phone’s display at Moh Level 6 and suffered deep scratches at Level 7. OnePlus Nord includes Gorilla Glass 5 Protection. Testing revealed that the company provided a plastic buffer layer between the glass and the frame to protect the phone from falling.

Interestingly, testing revealed that the OnePlus Nord does not have a metal frame. Instead the company has added a silver coating to it, giving a completely metal frame feel. This frame is actually plastic. The power button and switch are made of metal and the back of the phone is made of glass. The SIM tray is seen to have a rubber coating for extra protection.

The display was also tested with fire, during which it was revealed that the pixels of the OnePlus Nord begin to turn white after a continuous fire of about 20 seconds. Nelson says that these pixels were not fully recovered. The scratches do not affect the functionality of the optical fingerprint scanner, which is a good thing.

During the bend test, the build quality of the OnePlus Nord was revealed, with only a slight noise when applied for the first time. After Nelson was pressurized further, a cracked sound was heard and the frame near the volume button appeared to be torn. Shortly thereafter, the display becomes useless and no use is left. Although there are no cracks in the front and rear exterior glass, the screen under the glass is ruined under pressure.

Nelson says that the pressure he put on the OnePlus Nord is ‘not normal’ and that the phone does not withstand such pressure during everyday use. However, he advises users of OnePlus Nord to always keep the phone in the back pocket.