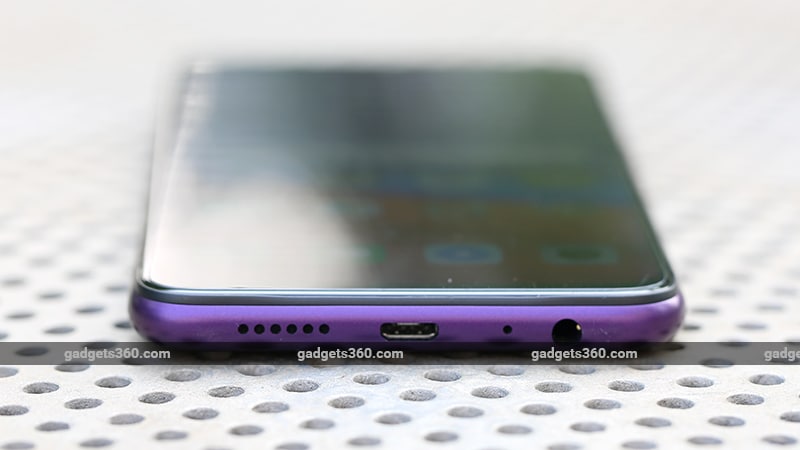 The handset manufacturer Oppo launched Oppo F9 Pro (Review) last month, during the event, the company also announced Oppo F9. The price of Oppo F9 in the Indian market is Rs 19,990. VOOC Flash Charge technology is not used in Oppo F9. Instead of 6 GB RAM, the 4 GB RAM variant of Oppo F9 has been launched. A 16-megapixel rear sensor has been given for photography. The specification and features have been reduced due to the lower price compared to Oppo F9 Pro. The F9 Pro is priced at Rs 23,990 in India. That is, there is a difference of Rs 4,000 in the price of both handsets. At this price you will get many brands of smartphones which can be a profitable deal to buy. Is Oppo F9 the best smartphone for you? Let’s know.

Both Oppo F9 and Oppo F9 Pro are similar in terms of side and size. Different finishes have been used in both to differentiate between the two models. The F9 Pro has different patterns and gradients with flashy color scheme. At the same time, diamond cut pattern has been given in F9 like Realme 1 (Review). Customers can buy the phone in Mist Black and Steeler Purple colors. The pattern is not necessarily visible at all times, it emerges when the light on the back panel falls. We have a purple color variant available for review. This color looks a bit different compared to the black and gold color smartphones present in the market.

This OPPO handset is made of plastic, the biggest feature of the F9 is its display. The F9’s notch is smaller than other smartphones, the company has named it Waterdrop. A 16-megapixel front camera will be available for selfie and video calling. In order to make the notch smaller size, the earpiece has got a place just above the selfie camera. Similar notch can be in the company’s Vivo V11 Pro (review) and OnePlus 6T.

In the retail box, you will find the phone cover and the screen protector on the phone. The body of the F9 is slightly outward facing. Although the back panel is plastic but it is giving a glass look. Scratches can easily occur if the back panel is not covered. The power button is placed on the right side, the sound and the button on the left side. When holding the phone correctly in the hand, the finger easily reaches the fingerprint sensor on the back panel. Just above the fingerprint sensor is the horizontal rear camera setup and LED flash. As you can see in the picture, metal has been used all around to protect the camera module from scratch. The bottom of the phone has a Micro-USB port, 3.5mm headphone jack, loudspeaker and microphone instead of Type-C. There is a SIM tray on the left side of the phone, two nano-SIM and microSD card slots have been given. 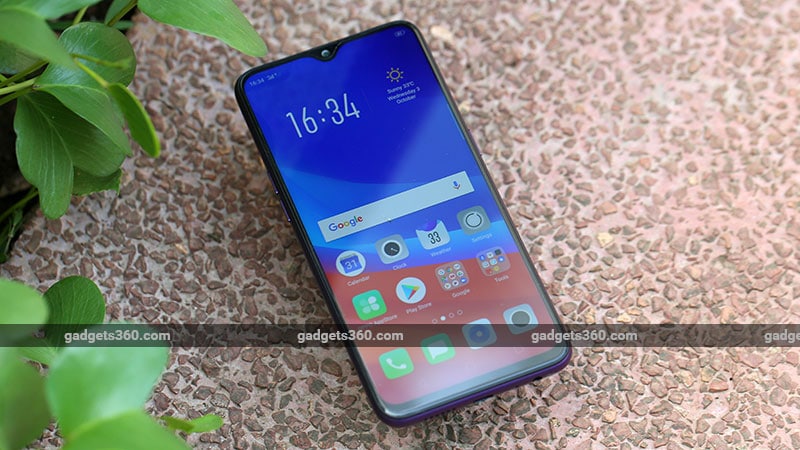 The F9 Pro and F9 have a lot in common in hardware. For speed and multitasking, it has ARM Cortex-A73 core and Cortex-A53 core with 2 GHz MediaTek Helio P60 Octa-core processor. The same processor has also been used in Realme 1 and the recently launched Nokia 5.1 Plus. Oppo F9 has 4 GB RAM and 64 GB internal storage, storage can be increased to 256 GB with the help of MicroSD card. There is a 6.3-inch LTPS display with full HD resolution, with an aspect ratio of 19.5: 9. Connectivity features include 4G VoLTE, Wi-Fi 802.11 AC, Bluetooth 4.2, GLONASS and GPS. The battery is 3500 mAh but it is not equipped with fast charging support. We tried to install VOOC charger in Oppo F9 but it was not charging F9. Oppo F9 will come with Color OS Skin based on Android Oreo. The handset we have for review is running on the July Security Patch. When you pull the home screen from the right side, the Smart Assistant will open, on the top you will see the search bar, shortcuts for some apps, the weather and step counter widget. Like iOS, in this Oppo smartphone, if the home screen is swiped down, then the universal search function will open. Many menus and sub menu options will be found in the Settings app. We did not see the search function in the app. This means if you want to find a function, you will not be able to search with the help of search bar. There are many pre-installed applications already in the phone. Oppo will also suggest you to install many apps on the App Store. During the review, we found that the default browser sends notifications several times a day.

The display of Oppo F9 is good, things are clearly visible on the screen when the phone is used in outside light. Compatible apps work in full screen mode and non-compatible apps on 16: 9 aspect ratios. But you also have the option to stretch these apps to full screen. This Oppo handset comes with Face Unlock Security, during the review we found that the feature works fast. When we reviewed the F9 Pro, the performance of the F9 Pro was slower than other smartphones Honor Play and Huawei Nova 3i found in the same price segment. The performance of the phone is better because while using the handset we did not feel that the phone is getting slow. We watched the PUBG game in F9, we would recommend keeping it on medium quality while playing the game on the phone. The phone did not slow down but it quickly started heating up. We noticed that the battery consumption was fast when playing the game. In 20-25 minutes, about 10 percent of the battery was reduced. In HD video loop test compared to F9 Pro, we found that the F9 smartphone gives 14 hours and 39 minutes of backup. After playing games, using WhatsApp account and watching online videos, the phone gives one day battery life. Power saving mode is also given to save battery.

Lack of not having VOOC charging technology can hurt you. The phone charged 29 percent in 30 minutes and 62 percent in one hour. It took 2 hours and 20 minutes for the phone to be fully charged. On the back panel of the phone, there will be a 16-megapixel primary sensor and a 2-megapixel depth sensor with selfie and a 16-megapixel front camera for video calling. Apart from the standard photo and video modes, the camera app has portrait mode, stickers, pano, time laps, slow-mo and expert. You can apply Flitter before clicking the photo, Google lens is also integrated in the stock camera app. The phone is fast to focus on anything, as well as the photos are quite sharp and accurate in daylight. 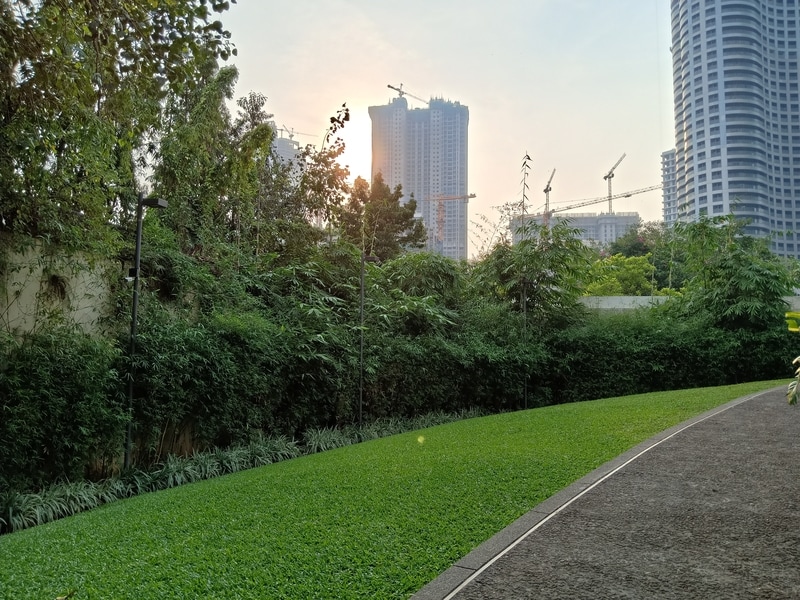 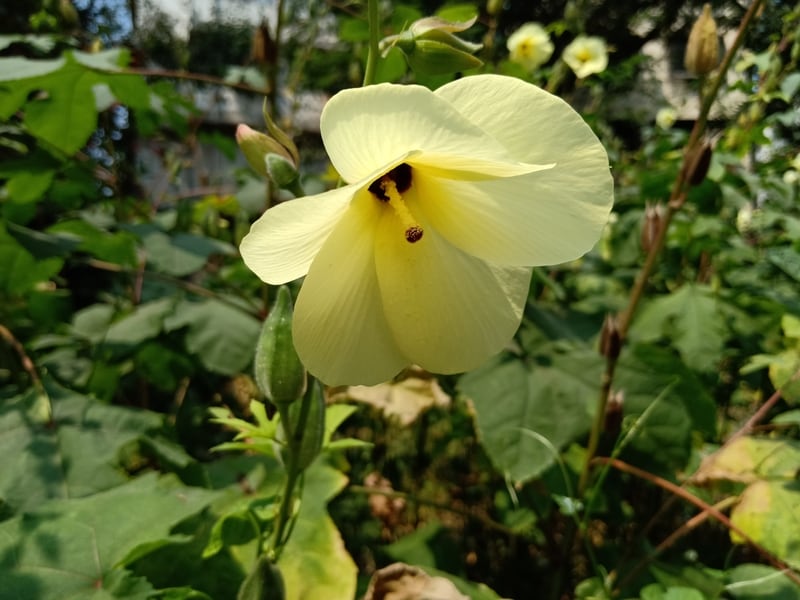 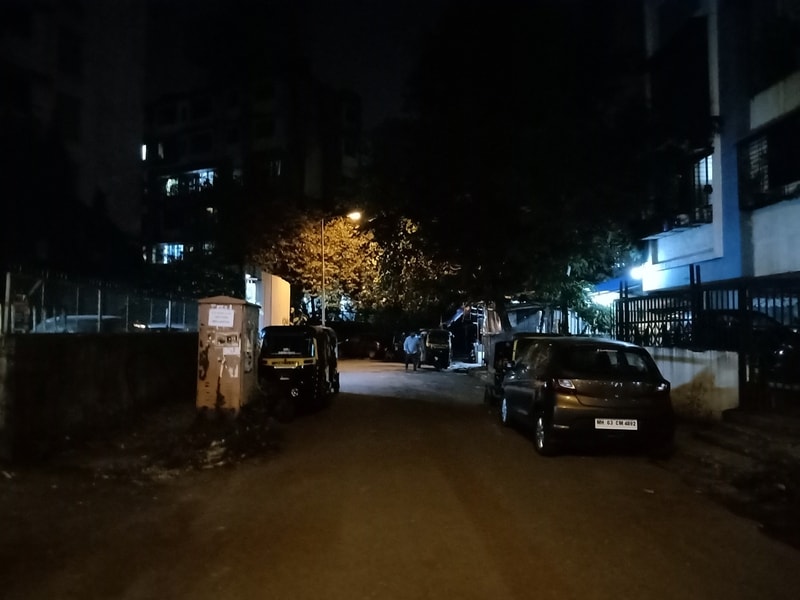 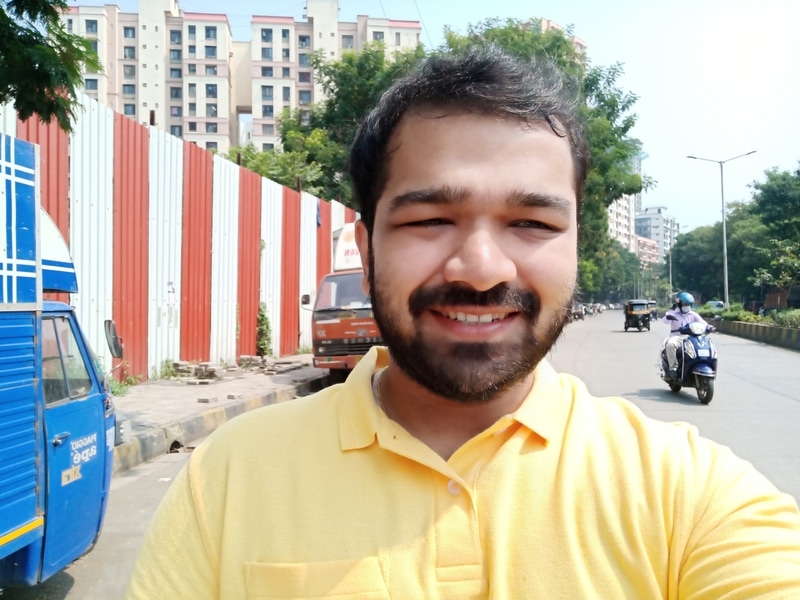 Focus takes a little time when shooting on a macro. The picture is sharpened, it also keeps the person and background separate. In low light, the camera performance fades slightly. Portrait mode uses a secondary camera, but there is no option for how much blur. But you will definitely get many lighting options. Portrait mode makes the background more blur due to which looking at the photo looks artificial. The F9 Pro has a 25-megapixel front camera for selfie, while the company has given a 16-megapixel front camera in the F9. The beautification mode and AI are pre-set to decide the beautification level. Apart from this, you can set the beautification level by yourself. The rear and front cameras are capable of recording video at 1080p. Video stabilization is available when shooting at 1080p from the rear camera.

The most attractive feature of Oppo F9 is the Waterdrop Notch present in the phone. Oppo has designed the handset better. The battery life and the performance of the phone is excellent at this price. If the design of the phone affects you more than the specification, then Oppo F9 is for you. On the other hand, phones of other company in the same price segment may be a better deal. If you want maximum performance then Xiaomi Poco F1 can also prove to be a great option. We have not yet reviewed the Vivo V9 Pro, but the hardware of this phone is also better.