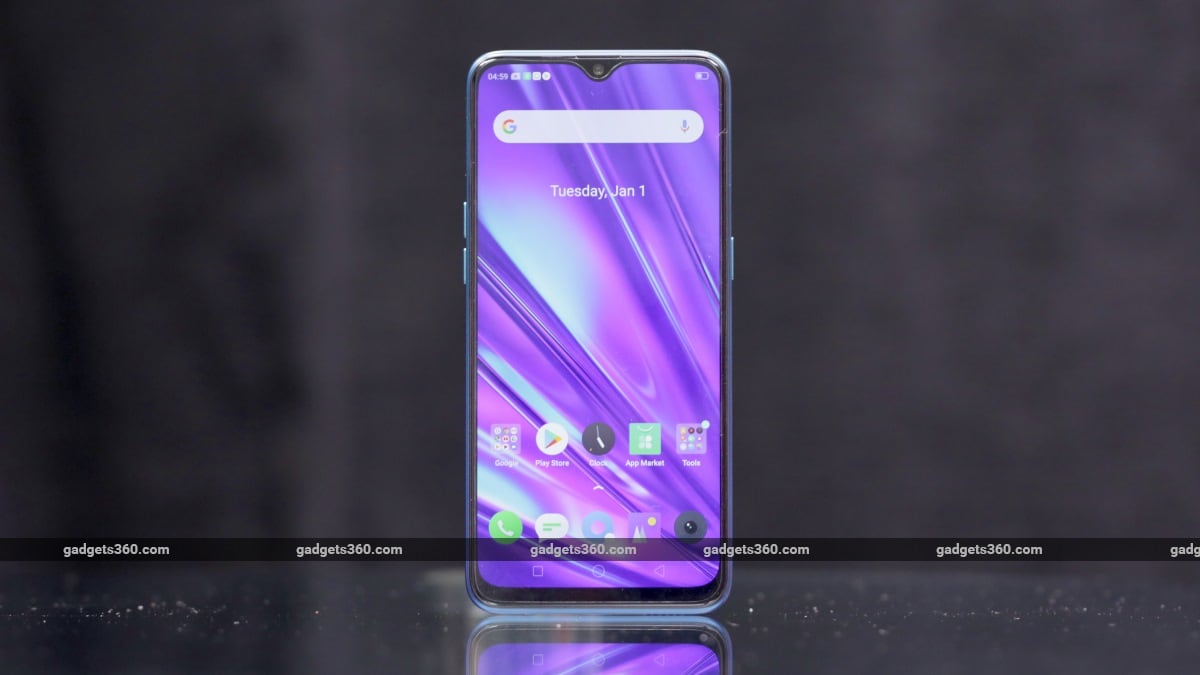 The amazing thing is that the Realme 5 Pro smartphone is slightly smaller than the Realme 5, but it is not a problem for us because it is easy to handle. It is not difficult to use Reality 5 Pro with one hand. Although it looks glossy but it does not slip at all when held in the hand. The phone weighs 184 grams, which is easily manageable.

Abstract angular lines are seen on the rear of Realme 5 Pro. Talking about the back panel finish, overall you will get a smooth texture. We have a crystal green unit of Reality 5 Pro with Emerald Green in the upper and Sapphire Blue in the lower part. Apart from this, there is also a sparkling blue color variant that uses the same pattern but it has purple in the upper and light blue in the lower part.

Many customers who have pre-applied screen protectors on the unit may like this. There will be a little border in the lower part of the phone but there is not much border in the upper and the sides of the screen. The 16-megapixel selfie camera has a place in Waterdrop Notch.

Realme said that Corning Gorilla Glass has been used on the front panel of the phone for security. Reality 5 Pro has a 6.3-inch full-HD + (1080×2340 pixels) display. After spending some time with the phone, we found that the screen is vivid and bright. The text and icons seem crisp and the colors were darker too. Overall we liked what we saw, but for the review we need to spend more time with the phone.

We did notice the UI icon, text, spacing and general design in the phone. Integrated quick notifications, settings app and task switcher all slick in the notification shade. More than 10 first and third party apps also appeared in the phone. Reality 5 Pro will get the power button on the right and the volume button on the left.

The phone will get 3.5mm audio jack, USB Type-C port and single speaker at the bottom. There is nothing but secondary microphone in the upper part of the phone. The SIM-tray is on the left side of the phone and has separate slots for two nano-SIMs and a microSD card. Fingerprint sensor has got place in silver-ring.

Now talk about the camera setup of Reality 5 Pro. Reality 5 Pro has four rear cameras. The primary camera is 48 megapixels. It comes with phase detection auto focus and f / 1.8 aperture. It has an 8 megapixel sensor with F / 2.25 aperture. It also has a 119 degree wide-angle lens. The quad camera setup also features a 2-megapixel macro lens for extreme close-up and a 2-megapixel depth sensor for portrait shots.

Electronic image stabilization is also a part of this phone. The LED flash has been found outside the camera module. The telephoto lens is not provided in the phone at this price.

Reality 5 Pro has Qualcomm’s new Snapdragon 712 chipset. Realme said that the UFS 2.1 standard has been used for the storage chip. The Reality 5 Pro has a 4035 mAh battery that supports VOOC 3.0 fast charging tech. A 20 W charger will be available in the retail box. Dual-band Wi-Fi 802.11 AC and Bluetooth 5.0 will be available for connectivity. In the review, we will provide you detailed information about the camera, software, performance, display quality, battery life and other features.