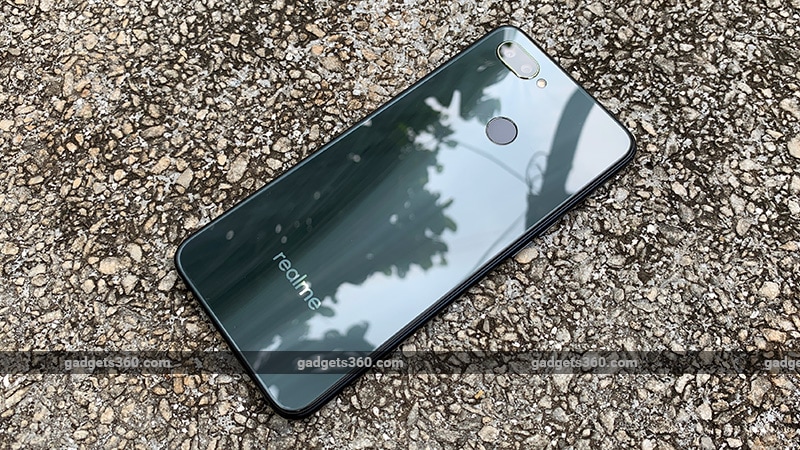 Xiaomi and Honor are dominating the market with affordable range of smartphones. But the Realme brand has once again made the race interesting. A recent report claimed that Realme has become a fast emerging company in India due to aggressive price and fast growing portfolio.

Realme has added a new series to its portfolio and the first smartphone of this series is Realme U1. It is also the company’s first selfie pro smartphone. It seems that Realme, once a sub-brand of Oppo, wants to repeat the strategy of its old company. No wonder Oppo’s F series has been extremely popular. Apart from the high resolution front camera, this handset is the first smartphone to come with the Helio P70 processor. This processor has been claimed to be more powerful and capable than the Helio P60.

Realme U1 will compete in the market from Xiaomi’s Redmi Y series, which is known for selfie smartphones. Apart from this, Asus ZenFone Max Pro M1 and Xiaomi Redmi Note 6 Pro will also be challenged. Is Realme U1 a smartphone worth buying? Let’s know …

Realme U1 looks very much like the recently launched Realme 2 Pro. There is nothing wrong in this. Due to the curved edges the grip is good and due to the matte finish it does not slip into the hands. The display is slightly out of the phone’s body. Similar is the condition of laminated back. The good thing is that during the review, there were no scratches on the back of this phone. It is convenient to keep the Realme U1 with an thickness of 8 millimeters and 168 grams cannot be considered too heavy.

Button’s position is good. During the review we did not have much problem in accessing the power and volume buttons. The SIM tray on the left has separate slots for two Nano SIMs and a microSD card. The Realme U1 has a speaker grill, micro-USB port and 3.5mm headphone socket at the bottom. Disappointed to not see USB Type-C once again. We have a complaint with the speaker grille position. Holding the phone horizontally blocks it easily. This means that the sound will not be clear while playing games or watching videos. 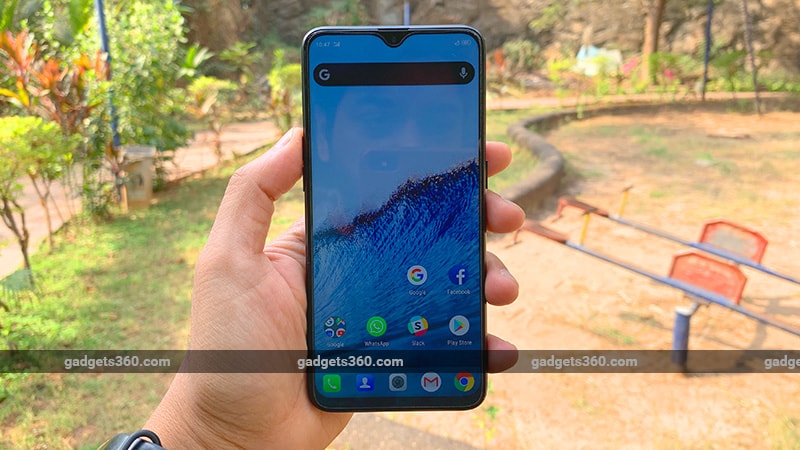 The 6.3-inch screen comes with 450 nit brightness levels. For this reason, there is no problem in reading on the screen in sunlight. It is an IPS panel and the screen resolution is 1080×2340 pixels. The photos on the display look sharp. You will also get the facility to control the color temperature in the Settings app. Realme has used Corning Gorilla Glass 3 which is slightly older. But nothing is better than nothing. The screen guard already exists on the phone. Scratch marks easily fell on it. Fingerprints on the screen guard also fall easily. Similar is the case with laminated backpanel. In such a situation, it will not be easy to keep Realme U1 clean always.

Waterdrop or dewdrop notch is beautiful in appearance. If you want, you can also hide the notch. There is a camera on the front panel. It also has earpiece and select sensors on top of it. There is no notification LED due to limited space.

Laminated back light gives a good visual effect when bounced. We received an ambient black unit for review. You also have options for Brave Blue and Fiery Gold. The emergence of dual rear camera modules is not very high. The fingerprint sensor is capable of rapid identification. Its texture is slightly different from the backpanel’s texture. So it is easy to find the sensor. Face unlock is also fast and in low light the display lights up so that the phone can be unlocked easily from the face. 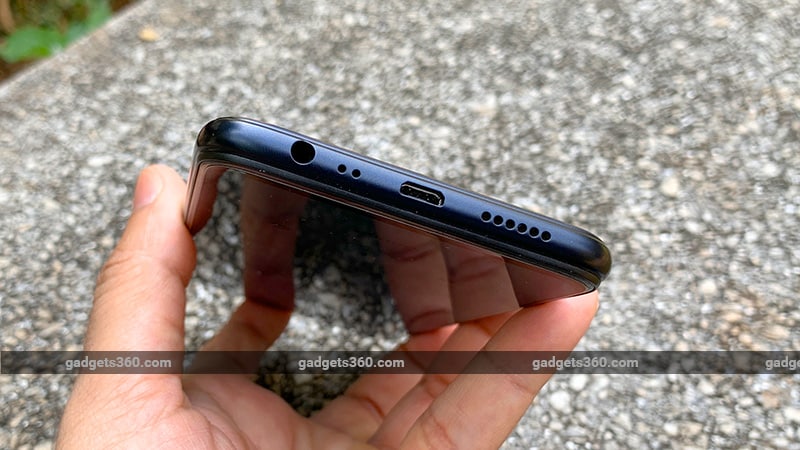 Realme U1 software and specification

One of the important features of Realme U1 is the MediaTek Helio P70 processor. It is a faster version than the Helio P60 chipset. According to Realme, this chipset gives 13 percent better performance than its older variants. It claims to have a better version of MediaTek’s on-chip AI processing engine. Realme U1 achieved good scores in the benchmark test.

We have reviewed 4 GB RAM and 64 GB storage variants of this phone. By the way, you also have the option of 3 GB RAM and 32 GB storage. Other features include dual-band Wi-Fi 802.11 AC, Bluetooth 4.2, USB-OTG, FM radio, GPS and GLONASS. Dual 4G dual VoLTE support is available. Proximity sensor, gyroscope, compass, ambient light sensor and accelerometer are part of this phone. 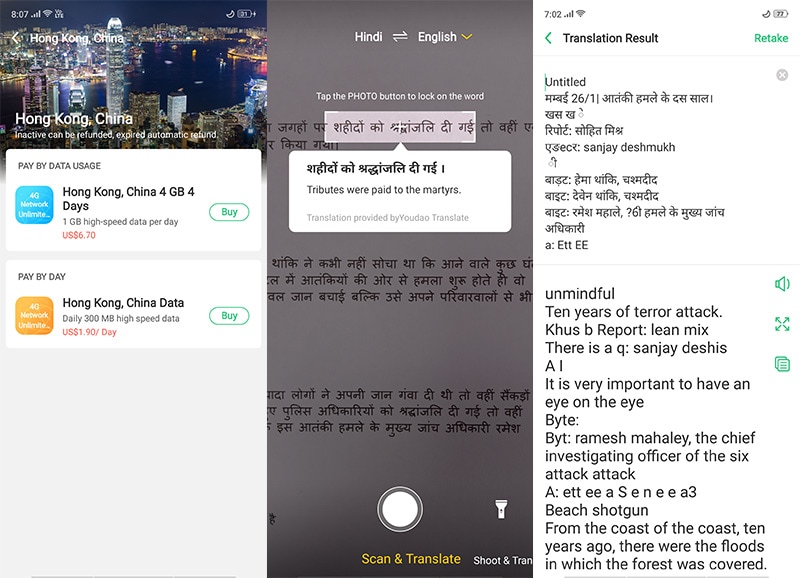 Like Realme 2 Pro, RealOS U1 has ColorOS 5.2 based on Android 8.1 Oreo. It has a security patch for October 2018. The company says that the phone will get an update of Android Pie early next year. It also has some new software features. Realme has finally given a single right swipe feature by removing the two-step process to dismount notifications.

You will get many app installs beforehand. Most of these can be uninstalled. Gestures are provided for navigation, screenshots and split screen modes. This phone has features such as Smart Scan and Oroming.

Smart Scan now supports Hindi. You can also scan a Hindi document using this app, after which the picture will be transformed into a text format. It works well and does not require an active internet connection. However, you will need internet for ‘Scan and translate’, which performs real time translation.

Realme U1 never surprised in daily use. The performance was as expected. Removing fingerprints on this phone is a very difficult task. We will suggest you to use the cover provided with the phone. The display is lively. Viewing angles are also very good. We also have no complaints about call quality. The phone remained cold on most occasions. 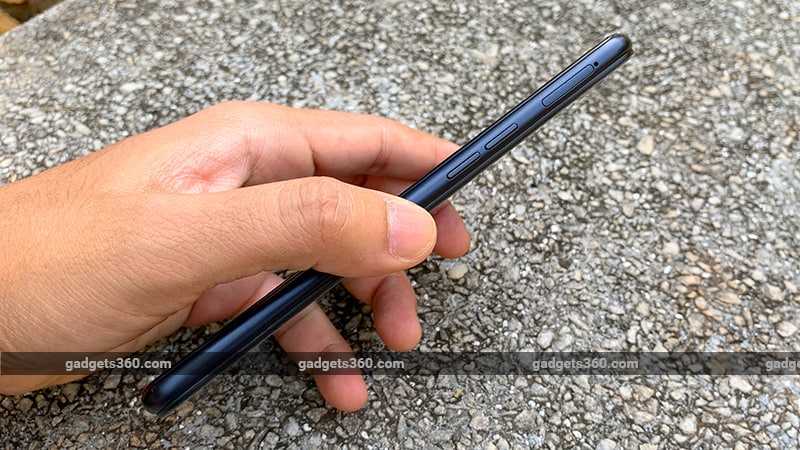 The Helio P70 processor handles most games with ease. The framerate also does not fall. Asphalt 8: Legends also performed well in high graphics presets. PUBG Mobile ran smoothly in the medium settings. The phone is hot when gaming and using the camera for a long time, which is common. Most popular audio and video formats worked well.

Because it is a selfie camera smartphone, let’s start with the front camera. It has a 25 megapixel F / 2.0 aperture sensor. In daylight, Realme U1 captures selfie with detail. Skin tones are good and colors are good. AI beauty mode is also not very aggressive. It smoothes your skin on most occasions.

If you like more saturated colors then you will like Super Vivid Mode. If you want, you can activate the depth effect or portrait mode, which do a good job of blurring the background. In portrait mode, the camera uses four-in-one binding technology. You get better detail photos, but the resolution remains 8 megapixel shot. You also get preview of HDR version after shooting in bright light. 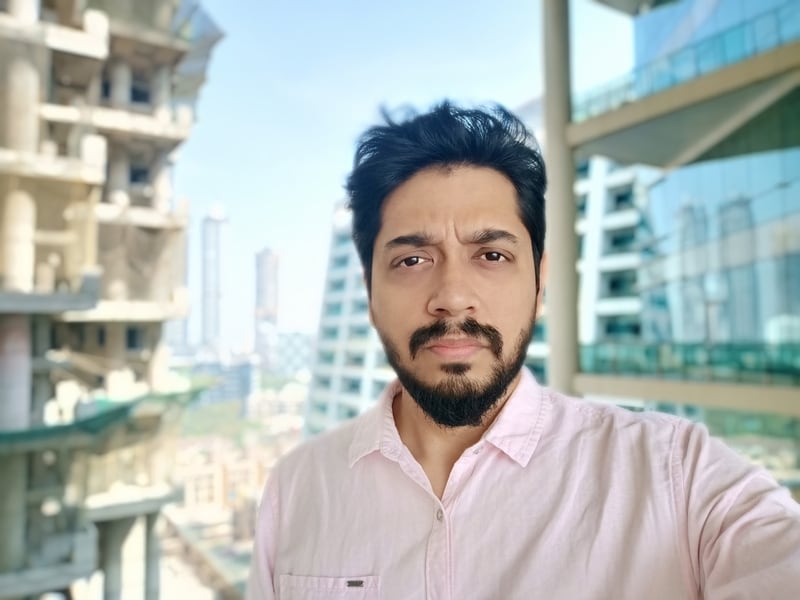 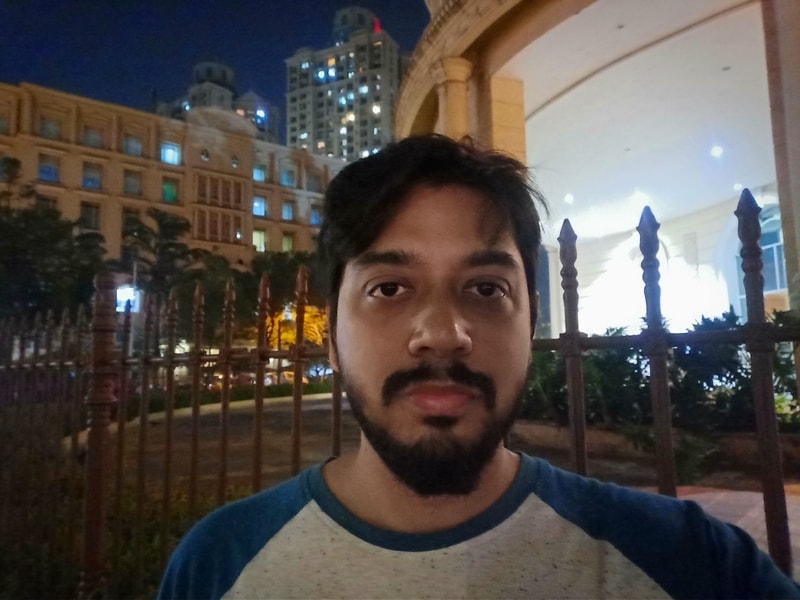 Tap to see realme U1 camera sample in full size

In low light, we found that the camera was having trouble capturing clean and detail shots. The surprising thing here is that the camera shoots in 25 megapixel resolution. Not in Pixel Binding Techniques. This brings selfie granny. HDR mode also does not help much. In this, bright lights are burnt out in the background. Edge detection is also not very accurate in low light and bokeh mode.

There is a 13-megapixel camera on the rear which is F / 2.2 aperture. It captures photos with details in natural light, but lags behind in low light. Autofocus is also not very fast. It consumes a few seconds before locking the focus. Super Vivid mode is an effective feature. HDR also works satisfactorily. You will find modes like Panorama, Timelaps, Professional and Portrait. Portrait shots are good due to the 2 megapixel depth sensor. 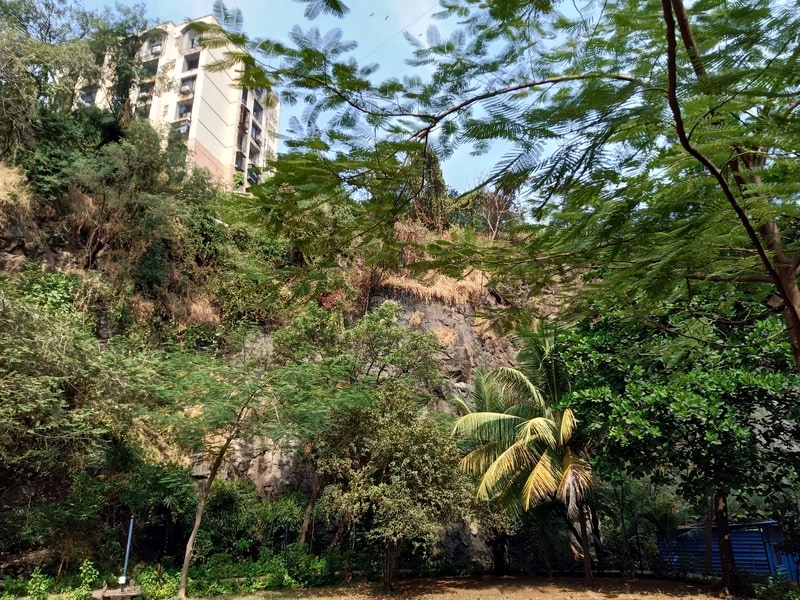 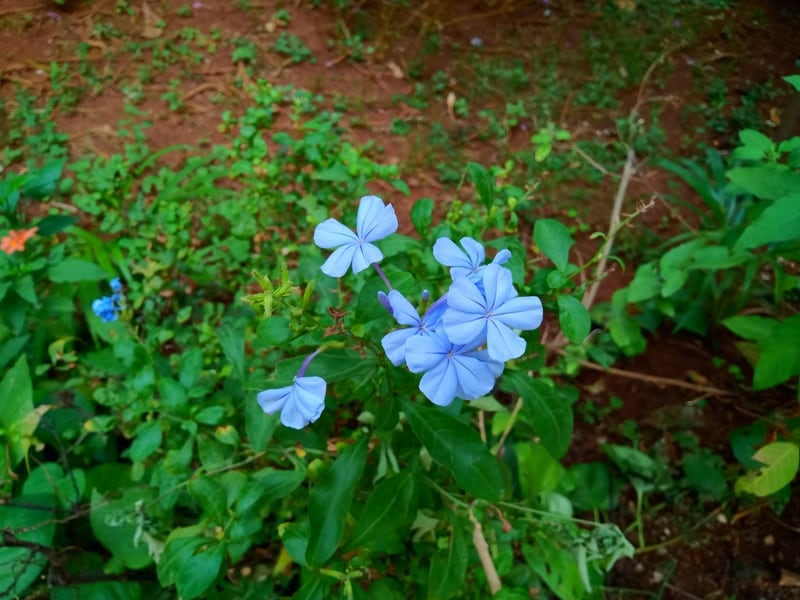 Shot using Super Vivid mode on the Realme U1 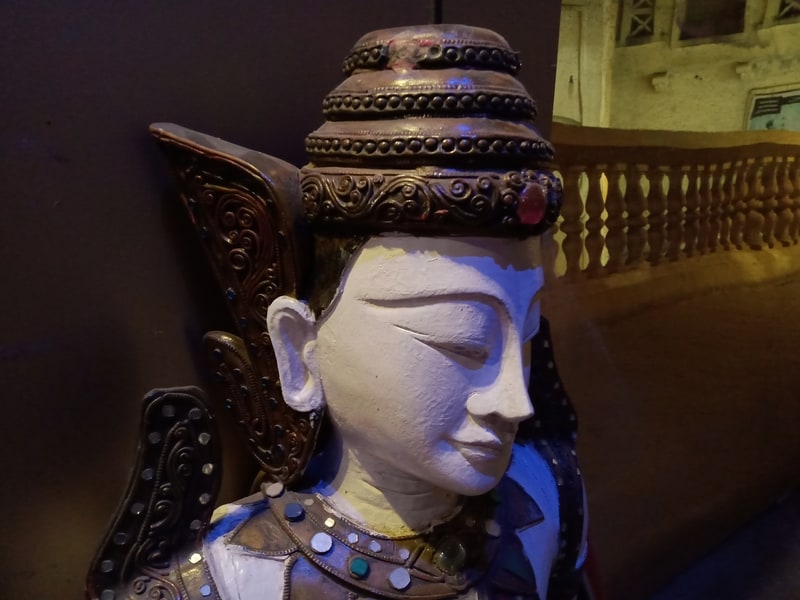 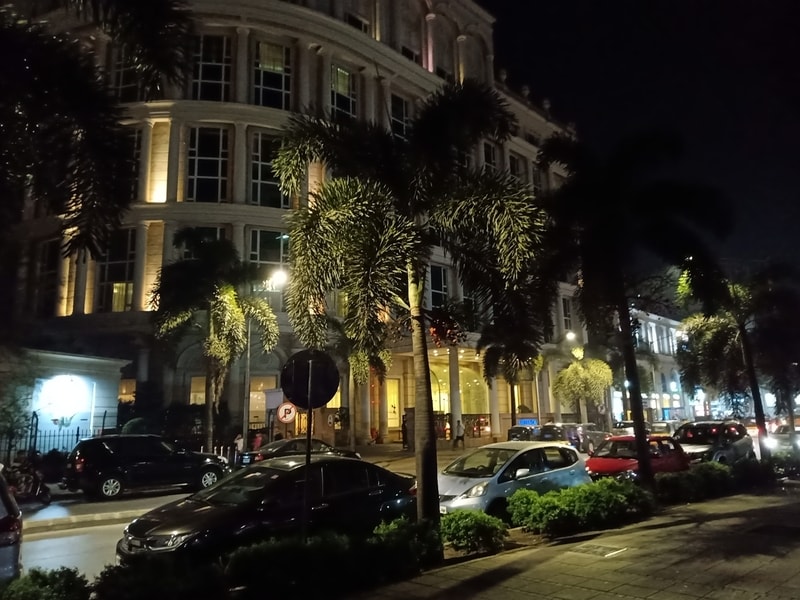 Tap to see realme U1 camera sample in full size

With this phone, you will be able to record videos of maximum 1080 pixel resolution. But electronic stabilization is not. Quality is good, but autofocus does not work fast. The framerate is very solid and even low-light footage is not very noisy. Despite having a powerful processor, the rear camera cannot record 4K video. This is disappointing, as many phones in this price segment are equipped with this feature.

The 3500 mAh battery easily lasts all day. In our HD video loop test, the battery of Reality U1 lasted 14 hours 56 minutes. There is no fast charging, but the 10 watt adapter helps in fast charging.

Our decision
The price of Realme U1 starts at Rs 11,999. This price is of 3 GB RAM and 32 GB storage version. The price seems aggressive given the powerful processor and battery life. At this price you will get 4 GB variants of Xiaomi Redmi Y2. But keeping the performance of the front camera of both phones in low light, according to us, Realme U1 is a better option. Because it comes with the latest design and more powerful processor.

The 4GB RAM variant we tested is priced at Rs 14,499. In a way, it challenges the early variants of the powerful Realme 2 Pro of Reality. Realme 2 Pro comes with better rear camera and has support for 4K video. If both these things are primary for you, then we would suggest you to buy a pro model. We expected that the performance of the Reality U1 camera would be equal to or better than the Reality 2 Pro. In this phone market, there will also be a challenge from Redmi Note 6 Pro and Asus Zenfone Max Pro M1 (6GB), which give good performance in every department.

This phone of Realme also has some drawbacks. There is no video stabilization and the low light performance of both camera setups is extremely average. But the powerful processor, powerful battery life, good camera performance in daylight, sharp display and beautiful design make this phone a good choice.