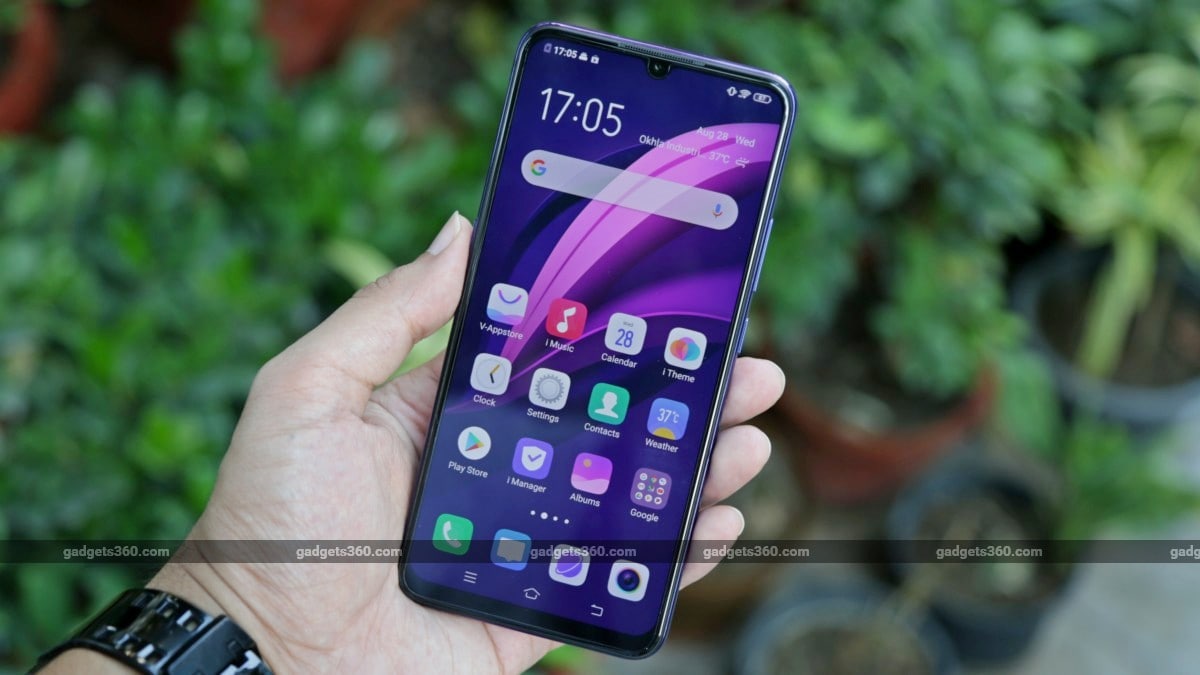 Vivo Z1x Review in Hindi: Vivo Z1x is the latest smartphone of handset manufacturer Vivo. The Vivo Z1X is equipped with better camera hardware, AMOLED screen and in-display fingerprint sensor for security. Is Vivo Z1x a better smartphone with a starting price of Rs 16,990? We have seen the camera, display, processor, etc. of the phone by testing it, so now let us provide you every detail about the handset in detail …

Vivo’s latest smartphone Vivo Z1X has a slightly flashy design. The rear panel of our review unit comes with Phantom Purple, the top and middle will be seen with a light shade of purple. The surface of the back panel is glossy and slightly reflective, due to which dust and spots easily fall on the phone. The frame is made of polycarbonate and is easily joined with a flat rear panel.
There is a small waterdrop-notch on the front panel of the phone, just above the notch is the earpiece which is quite thin. The Vivo Z1X display is protected with Schott Xensation 3D Glass which is an alternative to Corning Gorilla Glass. The volume and power buttons are placed on the right side of the phone, while the Google Assistant button and dual-nano card tray are found on the left side of the phone.

The speaker, USB Type-C port, 3.5mm headphone jack and mic are located at the bottom of the phone. Despite being smaller and lighter than the Vivo Z1 Pro, the Vivo Z1x is still large and weighty (189.6 grams). It is not easy to use the phone with one hand unless your hands are large, the arm has to be stretched to reach the content at the top of the display. The exterior of the phone is slightly slippery.

Some people may prefer the contrast provided by gold branding instead of the shiny rear panel, but we don’t like too much brightness in the phone. The build quality of the Vivo Z1x is good, but the ergonomics could have been better. Two color variants of Vivo Z1X have been launched, Fusion Blue and Phantom Purple.

Recall that this chipset was also used in Vivo Z1 Pro. The Vivo Z1X has two storage variants, one with 64 GB storage which costs Rs 16,990, while the other variant has 128 GB storage and has been priced at Rs 18,000. It is worth noting that if there is no option of MicroSD card to increase the storage, then it will be right to buy 128 GB storage variants.

The most important feature of Vivo Z1x is the triple rear camera setup. On the back side is a 48 megapixel primary camera equipped with Sony IMX582 sensor, with an 8 megapixel super wide-angle camera with 120.4 degree field of view. And a 2 megapixel depth camera is also provided.

The Vivo Z1X has a 32-megapixel sensor for selfie and video calling, its aperture is F / 2.0. To make life in the phone, a battery of 4,500 mAh has been provided, which will support 22.5 watt flashcharge technology. In the retail box you will get a 22.5 W charger. The phone has an in-display fingerprint sensor for security, claiming that it unlocks the phone in just 0.42 seconds.

Funtouch OS is a havelli customized version of Android that replaces all the icons etc. of the location of the tool etc. in the Esthetics and Settings app. It moves all the Quick Settings buttons to the shortcut center like iOS which can be accessed by swiping up from the bottom of the screen.

Some UI elements annoy users such as greater brightness and a sound profile bar that takes up a lot of space, causing users to scroll down to the location, low-power mode, and airplane mode buttons. Custom Funtouch OS navigation gestures are half-baked. Surprisingly, if you do not want to use gestures etc. in the phone, then Android navigation buttons have also been provided.

The phone does not have an app drawer, swiping left on the home screen opens the Jovi Smart Scene page in which you get calculators and voice recorders, plus news headlines, weather updates, shortcuts to tools like to-do list widgets. FunTouch OS also has some nifty tools. For example, you can quickly create a second app (say, dual-app) of the Compatible app on the home screen and easily draw scrolling screenshots.

Apart from this, you will get the File Safe feature in the phone, with the help of which users can hide media files, documents and other things. Dark mode has also been added to the phone, black bankground is usually useful with AMOLED panel but FunTouch will give you dark shade of gray.

Apart from this, smart motion tool and split screen shortcut are also given. However the phone has many bloatware such as in-house apps that cannot be uninstalled and some third-party apps such as Gaana, WebNovel, PhonePe, Paytm, Facebook and Opera have been given. Some gaming tools are also provided in the phone.

The game picture-in-picture tool opens a floating window for messaging apps without closing the game. Ultra Game Mode is the phone’s gaming hub and provides quick access to notification controls. Off-screen autoplay ensures that the game continues to run when the screen is off. We did not see advertisements and spammy notifications while using the phone. Our review unit runs on the July security patch but we expect the company to roll out the update before the sale of the phone.

Vivo claims that the phone has a low brightness mode, which is similar to DC dimming. The in-display fingerprint sensor is quite fast. During the review, we did not have any problems regarding the accuracy of fingerprint recognition. Vivo Z1x has Snapdragon 712 processor which proved to be a reliable performer. It handles all the tasks, heavy multitasking and games of the day easily.

Benchmark scores show that when it comes to CPU performance, it is faster than the Snapdragon 710. Talking about media performance, the sound comes out right from the speaker of the phone but distortion is felt when the volume is more than 80 percent. The design of the headset found with the phone is similar to the design of Apple earpods, perfect for listening to calls and music but don’t expect good bass response or vocal clarity.

The PUBG Mobile and Asphalt 9 Game Boy defaults were set to high graphics and the Vivo Z1X gave a smooth gameplay experience. Mortal Kombat and Injustice Gods Among Us games also played fast. We were surprised by the Vivo Z1X’s thermal performance, because even after playing 30-50 minutes, the phone had only minimal heating.

The Vivo Z1X has a 48-megapixel primary camera on the back which is equipped with Sony IMX582 sensor. It has an 8 megapixel super wide-angle camera with a 120.4 degree field of view. And a 2 megapixel depth camera is also provided. The rear camera captures vibrant pixel-binding photos in daylight.

The phone has fast focus and was largely accurate. Landscape photos however appeared to be overprocessed, lacking in detail. The Redmi K20 (review) also has the same 48 megapixel camera sensor, it captures better photos with accurate color and more detail. Native AI beauty mode helps with the dynamic range problem to some extent, making the picture more vibrant.

On the other hand, low-light photos also show Grain with Noise. Night mode adds some color to the frame and the elements look slightly sharp. Redmi Note 7 Pro and Motorola One Vision (Review) perform better in low-light.

With the help of wide-angle camera, more people and objects can be captured in a scene. Wide-angle photos were dim and less sharp. Users can also capture 48 megapixel pictures in 4: 3 aspect ratios. Full-resolution photos capture more detail than pixel-binding 16-megapixel photos.

In portrait shots the difference between subject and background was correct but the blur effect was unstable. The blur effect can be adjusted even after capturing portrait photos in the pre-loaded album app. There are also portrait lighting effects with features such as scene modes, AR stickers, dynamic filters for short videos, and live photos.

The 32-megapixel front camera captures crisp selfies with true color. Selfies came out well with the Bokeh effect. Now talk of video. The phone is capable of producing 4K and 1080 resolution videos at 30 frames per second, which can be a bit disappointing. Because low-cost phones record full-HD video at 60 frames per second.

Talking about video quality, 1080 resolution video stabilized eye and color reproduction was also correct. The wide-angle camera records video at 1080 resolution. The Vivo Z1x has a battery of 4,500 mAh for life, which lasted for a day comfortably. Even played PUBG Mobile for two hours on high-graphics settings, watched music for three hours through calling, social media usage and wire headphones, and at the end of the day after full day internet connectivity, about 30 percent battery left in the phone was.

In our HD video loop test, the phone ran for 18 hours and 52 minutes before shutting down. The 22.5 watt charger that comes with the phone takes 0 to 50 percent of the phone in just 38 minutes and takes about an hour and a half to fully charge the phone.

The design of the Vivo Z1X is quite attractive. The build quality of the phone is strong but the phone is quite large. Vivo Z1x’s AMOLED display is quite impressive. There is no problem with the general performance of the phone as well, graphics-intensive games went on uninterrupted. Looking at the price, the camera output was correct but Realme X (review) and Redmi Note 7 Pro (review) give better results. The battery life of the phone is good and the phone performed very well in our HD video loop test.

The Vivo Z1x is a worthwhile move for its siblings, but performs better in the camera department despite a premium command. Lack of expandable storage can also be a problem if you are considering base variants. Customers taking the base variant of Vivo Z1X may have problems because the phone does not have an option to increase storage.

With a starting price of Rs 16,990, the VV Z1X is definitely an attractive option. However, at this price, this phone of Vivo brand will compete with smartphones like Realme X, Redmi Note 7 Pro, Oppo K3 (Review).