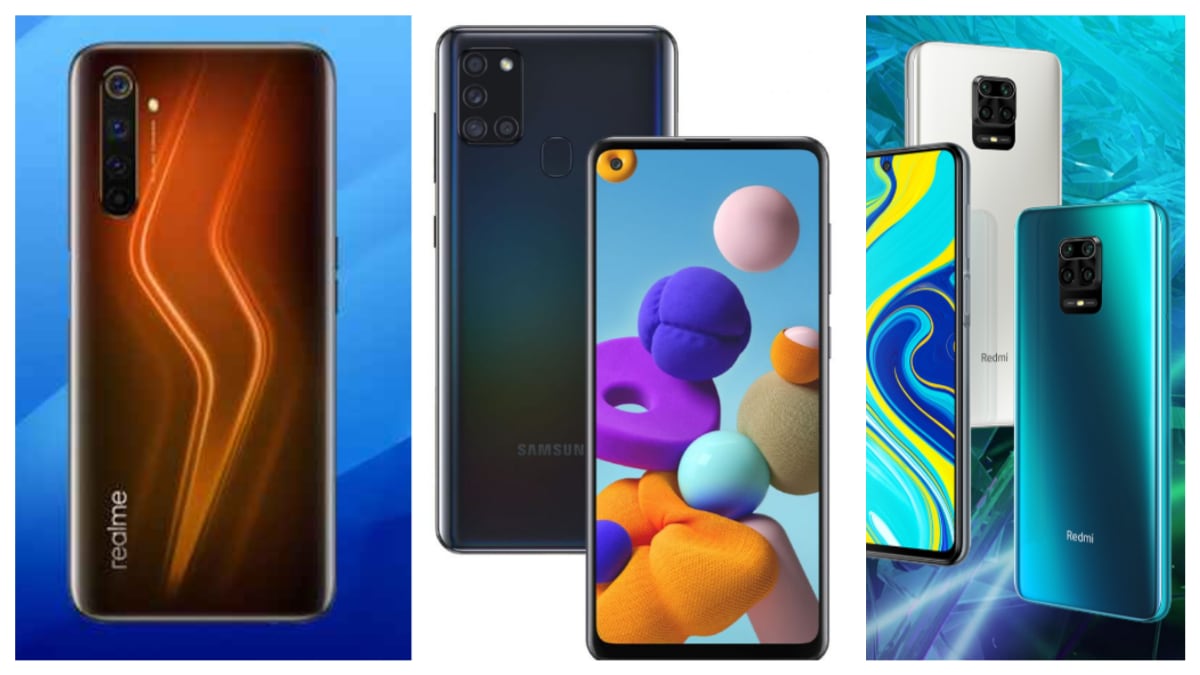 Samsung has launched its latest smartphone Samsung Galaxy A21s in the Indian market, which was launched on Wednesday 17 June. This mid-range smartphone from Samsung comes with a quad rear camera setup and a 5,000 mAh battery. In terms of price and specification, this smartphone will compete with Redmi Note 9 Pro Max and Realme 6 Pro in the Indian market, which are very popular in this price range. Now the question in your mind will be, who is better between Samsung Galaxy A21S, Redmi Note 9 Pro Max and Realme 6 Pro?

To know the answer to this question, we have compared the price, features and specification of Samsung Galaxy A21s to Redmi Note 9 Pro Max and Realme 6 Pro.

The Samsung Galaxy A21S handset has a 6.5-inch HD + (720X1600 pixels) Infinity O display, with a 20: 9 aspect ratio. The phone runs on One UI based on Android 10. The octa-core Exynos 850 processor has been used in the phone. Up to 6 GB of RAM is available for Jugalbandi. Inbuilt storage is 64 GB. Storage can be increased up to 512 GB via microSD card.

The Redmi Note 9 Pro Max runs on MIUI 11 based on Android 10. It has a 6.67-inch full-HD + (1080×2400 pixels) IPS display, with a 20: 9 aspect ratio. The phone has Triple Corning Gorilla Glass 5 protection. This protection is also available on the front and rear panels of the phone and the rear cameras. The smartphone has 8 GB LPDDR4X RAM with an octa-core Qualcomm Snapdragon 720G processor. Redmi Note 9 Pro Max comes with 64 GB and 128 GB UFS 2.1 inbuilt storage. Both variants support microSD cards up to 512 GB.

The primary sensor in the quad rear camera setup of Redmi Note 9 Pro Max is 64 megapixels. It has an 8 megapixel secondary camera with a 119 degree field of view. There is also a 5 megapixel macro shooter and 5 megapixel depth sensor. The phone has support for RAW photography. Apart from this, the smartphone comes with a 32 megapixel selfie camera.

Reality 6 Pro is also a handset with four rear cameras, which has a 64-megapixel Samsung GW1 primary sensor. Its aperture is F / 1.8. Camera setup comes with an 8-megapixel ultra-wide angle shooter, a 12-megapixel telephoto camera, and a 2-megapixel macro camera. The camera setup supports 4K video recording at a rate of 30 frames per second. It has a 20x hybrid zoom. Realme 6 Pro has dual hole-punch selfie camera setup. There is a 16 megapixel Sony IMX471 primary sensor. The aperture is F / 2.0. It has an 8 megapixel secondary camera equipped with ultra-wide angle.

The Samsung Galaxy A21S battery is 5,000 mAh. It supports 15 W fast charging. It has a fingerprint sensor on the back and is equipped with facial recognition technology. The dimensions of the phone are 75.3 x 163.6 x 8.9 millimeters and weight 191 grams.

The Redmi Note 9 Pro Max has a 5,020 mAh battery that supports 30 Watt fast charging. The fingerprint sensor has been given on the edge of this phone.