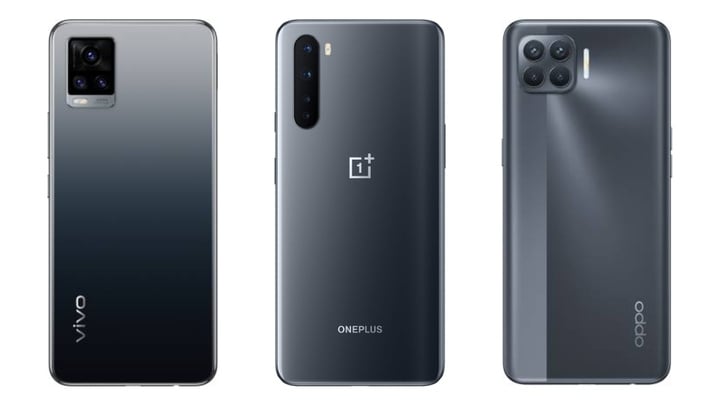 After a long wait, Vivo has finally launched its latest smartphone Vivo V20 in India. Let me tell you, the specialty of this smartphone is Android 11. Yes, Vivo V20 is the first phone in India to run on Android 11. However, speaking of its other specifications, it is equipped with a triple rear camera setup, apart from this the phone has 33 watt fast charging support and 44 megapixel selfie camera. The price of this phone in India starts at Rs 24,990, which has another variant. However, there are two other brands of smartphones at this price, which can give a tough competition to this phone, Oneplus Nord and Oppo F17 Pro smartphones. OnePlus Nord is the budget smartphone of Oneplus, although in terms of specification, this phone is largely similar to its flagship level OnePlus 8. In terms of price, Oppo F17 Pro is a cheaper smartphone than both of these phones, whose specification is similar to them.

For your convenience, we have compared the Vivo V20 smartphone to Oneplus Nord and Oppo F17 Pro based on the price, specification and features. So that you can understand which smartphone will be best for you in this budget.

The price of Oppo F17 Pro in India is Rs 22,990 and it comes in only 8 GB RAM and 128 GB storage variants. The phone will be offered in Magic Black, Magic Blue and Metallic White color options.

Both the OnePlus Nord and Oppo F17 Pro phones are equipped with a quad rear camera setup, although the Nord has a 48-megapixel Sony IMX586 primary sensor with F / 1.75 aperture. It is worth noting that this primary sensor has been used in OnePlus 8. It comes with optical image stabilization. The camera setup has an 8-megapixel secondary camera, a 2-megapixel macro camera, and a 5-megapixel depth sensor. Apart from this, OnePlus Nord has a dual selfie camera setup for selfie and video calling. The front has a 32 megapixel selfie camera and the secondary camera is 8 megapixels.

Vivo has given 128 GB storage on Vivo V20, which has micro SD card support. At the same time, the inbuilt storage in OnePlus phone goes up to 256 GB. However, there is no facility to increase storage in this phone. Oppo F17 Pro has 128 GB of onboard storage, which also supports micro SD card.