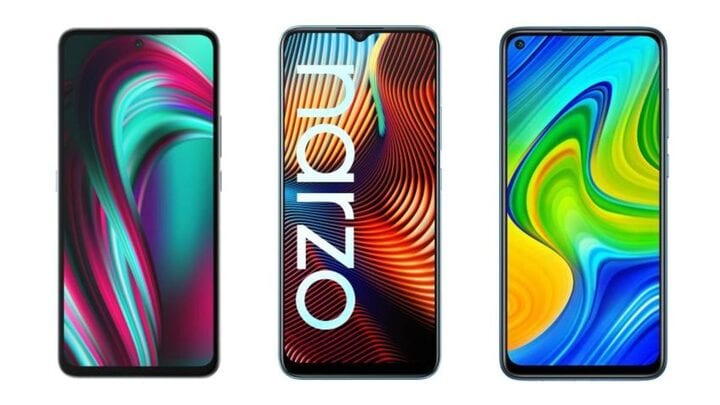 After waiting for a long time, Micromax has once again entered the smartphone market with In series smartphones. In this series, the company has launched two smartphones, Micromax In Note 1 and Micromax In 1B. Both these Micromax smartphones come with MediaTek processor and stock Android experience. Micromax In Note 1 is an expensive smartphone in this series, which starts at Rs 10,999. In terms of price and specification, this Micromax smartphone will be compared to the Realme Narzo 20 and Redmi Note 9 handsets in the market. The price of Realme Narzo 20 phone starts at Rs 10,499, while the price of Redmi Note 9 phone is slightly higher than both these phones, which starts from 11,999.

For your convenience, we have compared the recently launched Micromax In Note 1 smartphone with Realme Narzo 20 and Redmi Note 9 on the basis of price, specifications and features. So that you can understand which smartphone will be best for you in this budget.

Micromax In Note 1 vs Realme Narzo 20 vs Redmi Note 9: Price in India

Price of Realme Narzo 20 in India starts at Rs 10,499. This price is of 4 GB RAM and 64 GB storage. The model with 128 GB storage will be sold for Rs 11,499. The Realme Narzo 20 phone will be available for purchase in Glory Silver and Victory Blue color options.

Micromax In Note 1 vs Realme Narzo 20 vs Redmi Note 9: Specifiactions

Reality Narzo 20 has three rear cameras. It has a 48-megapixel primary camera with F / 1.8 aperture. It has an 8 megapixel secondary camera with F / 2.3 ultra wide angle lens. The 2-megapixel macro camera is also part of this setup. Realme Narzo 20 also has an 8 megapixel selfie sensor for selfie and video calling. The selfie camera supports AI beauty, HDR, panoramic view and timelapse features.

The Redmi Note 9 also has a quad camera setup, which has a place in the square module. There is a 48 megapixel Samsung GM1 primary sensor, with f / 1.79 lens. There is also an 8-megapixel secondary camera, with ultra-wide-angle f / 2.2 lens. Apart from this, there is a 2 megapixel depth camera and a 2 megapixel macro camera. The phone has a 13-megapixel selfie camera.

All three phones have 128 GB of storage, in which micro SD card is supported. Connectivity features include 4G VoLTE, Wi-Fi, Bluetooth, GPS / A-GPS, USB Type-C and 3.5mm headphone jack. There is also a fingerprint sensor on the back of the phone.